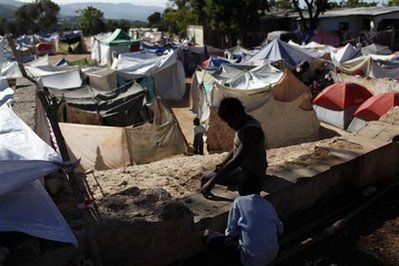 Cases of diarrhea, measles and tetanus have been reported in Haiti, the World Health Organisation said Friday as it expressed concern about the spread of such illnesses in camps for quake survivors.
"Several medical teams report a growing caseload of diarrhoea in the last two to three days," said WHO spokesman Paul Garwood.

"The are also reports of measles and tetanus, including in resettlement camps, which is worrisome due to the high concentration of people," he told journalists.

UN agencies and the Haitian government are aiming to launch a vaccination campaign against measles, tetanus and diphtheria next week.

Just 58 percent of Haitian infants were immunised before the quake, Garwood said.

He highlighted a "critical" need for surgeons in south Haiti with an estimated 30 to 100 amputations being carried out every day in some hospitals, while supplies of anaesthetics and antibiotics were also needed.