First Lady of funk: Michelle breaks down the dance floor with Jimmy Fallon on The Tonight Show {VIDEO}

Obama's and the Marley's Her mom moves on the dance floor have been well-documented over the years, thanks to her Lets Move! program.

But on Thursday night, to celebrate the fifth anniversary of her fight against childhood obesity, Michelle Obama once again busted some moves, this time on The Tonight Show Starring Jimmy Fallon.

In a segment called The Evolution of Mom Dancing Part 2, the pair partnered up once again to show off some self-made maneuvers to a cover of I Like The Way You Move.

It was a follow-up routine to a similar jaunt they did in 2013, in an attempt to inspire parents to get out and get moving with their kids. Lets disco: Michelle Obama strutted her stuff on The Tonight Show Starring Jimmy Fallon on Thursday night, in a follow-up routine to one they first did in 2013 Join in: First Lady Michelle Obama and Jimmy Fallon took it to the dance floor again during her appearance on The Tonight Show on Thursday night Oh no you didn't: At the end of the routine, Fallon pulled a goofy move he called the 'Barack Obama' Take this: But Michelle came back kicking, showing off an equally-awful jive called the 'Jimmy Fallon'

In dancing up a storm, the two demonstrated some jives they called 'You Go Girl' and 'Oh My God, I Didn't Know You Were Coming Here!'

But when Fallon pulled a silly move he called the 'Barack Obama', Michelle obviously hit back with a terrible take on Fallon himself.

It was first launched in February 2010.

During a sit-down with Fallon, Michelle spoke of what she's achieved in the last five years, and her love of music.

'I usually just put my earphones in in the car. I’m always listening to music. That’s the way I kind of settle myself.' Initiative: Lets Move! is an anti-childhood obesity campaign that Michelle first launched in 2010

However music isn't something she necessarily shares with her daughters, Malia, 17, and Sasha, 14.

'Now I’m at the stage where my kids are introducing me to music and they’re like, ''You don’t wanna hear this mom - the language is too bad'',' she said.

'Well, what are you doing listening to it?'

On March 16, Michelle busted some similar moves with Ellen DeGeneres, dancing in a much more choreographed segment to Uptown Funk.

Ellen and Michelle Obama break it down to 'Uptown Funk' Healthy eating: Michelle Obama told Jimmy Fallon that she gets her daughters to eat vegetables by having a 'no treat' rule in the house if they choose not to eat healthy Give me broccoli!: Michelle Obama told Jimmy Fallon that the no treat rule worked and her daughters asked for her to give them the broccoli

The US First Lady revealed that she - and a party of helpers from So You Think You Can Dance - will be performing a routine to the same song on the front lawn of the White House during the annual Easter Egg Roll.

This year's event, which will take place on the 6th April, is part of a tradition that dates back to 1878 when President Rutherford B. Hayes opened the White House gardens to local children.

Michelle said she has been practicing the dance, called Gimme Five!, for over a year.

In addition to breaking it down on stage, Michelle Obama told Fallon how she gets her teenagers to eat healthy food.

Obama said she has a 'no treat'  rule in her house if her daughters Sasha and Malia don't eat their vegetables.

If the girls tell her their 'full' because they don't want  to eat the vegetables in front of them, there are no substitute meals if they become hungry later.

'After a couple of days of starvation, it’s like, ‘gimme the broccoli,’ she joked

Fallon told FLOTUS that he too has a method of getting child to eat healthy but his method is a lot sneakier than hers.

'I’m trying to sneak vegetables into anything, but there is a sneaky way to do it,' Fallon said of giving his two young daughters vegetables. Polished: Michelle Obama wore classic black and white with a touch of silver in shoes when she went on Jimmy Fallon earlier in the week His own method: Jimmy fallon says he gets his toddler daughters to eat vegetables by hiding it in brownies 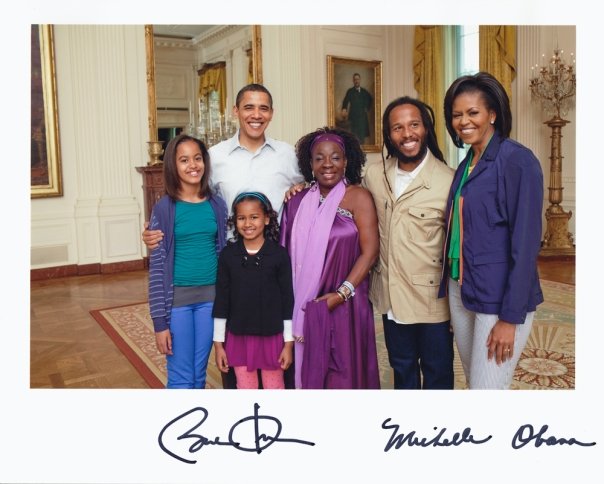 Thats was great. Shes the s***. Michelle is a cool down to earth 1st Lady. The best we've ever had..

Truly Amazing, our people have found a way to make the Presidency look cool and stylish. They get it in, while still, getting s*** done... Yall do the daam thing...