A police officer screens a person at J'Ouvert, September 4, 2017

Much like last year, the area surrounding the J'Ouvert celebration in Crown Heights on Monday morning will face heavy police security, Mayor Bill de Blasio and members of the NYPD explained on Thursday afternoon at the Brooklyn Public Library. The city is adding one new checkpoint, bringing the total number to 13, to control the flow of participants into the parade route. Last year, the newly installed checkpoints caused hours-long waits to enter the celebration, which kicks off the West Indian Day Carnival with costumes and steel drum performances.

The NYPD will begin restricting access to the two-mile J'Ouvert parade route at 10:30 p.m. this Sunday. At 2 a.m. on Monday, people can start lining up to be screened for weapons and alcohol, with the event officially beginning at 6 a.m. Hundreds of light towers will also be added the J'Ouvert route.

“In the safest big city in America, no one should have to choose between ensuring their safety and celebrating their heritage,” de Blasio told reporters.

In addition to screening for weapons and alcohol, no large backpacks will be allowed. Here's a look at what to expect, from last year:

The heavy security that began at last year's J'Ouvert left many participants feeling frustrated with the long wait times for screening. "This is f****** crazy," said Christine Lord, a Bedford-Stuyvesant resident. "How're you gonna scan thousands of people? Everyone else has a parade just fine—you have all the parades in Manhattan, and they don't do this. You have police coming from out the city and have no clue about our culture." 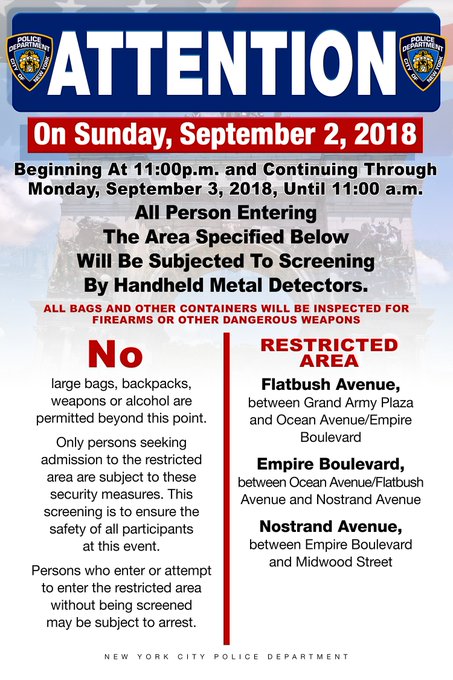 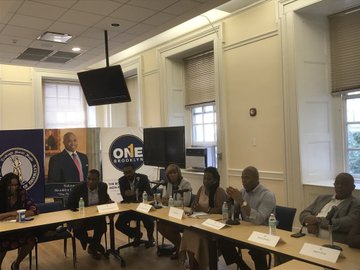 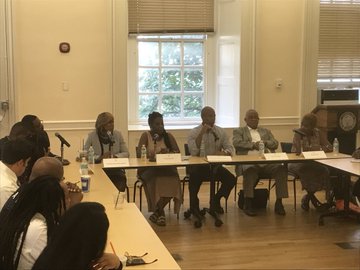 We work year-round with the @NYPDNews, @NYCMayorsOffice, @WIADCA, #JOuvert City International, violence interrupters, and community leaders to promote a safe and joyous celebration of Caribbean pride on Labor Day Weekend. Public safety is paramount, as is uplifting our culture.

Two people were killed, and several others were injured, during J'Overt in 2016, and in 2015 two people were also killed during the celebrations, including Governor Cuomo's first Deputy Counsel, Carey Gabay.

"The community has a vital role to play to make this J’Ouvert the safest and most enjoyable event possible," said Eric Cumberbatch, Executive Director of the Mayor’s Office to Prevent Gun Violence. "We know that local leaders will be intensely focused on ensuring that the festivities remain a positive experience for everyone.”

Comment by mr1stroke on September 1, 2018 at 7:54pm
Yes mostly the people I left behind I cried for,them, when I told them to get out they said I was crazy now they wish they can leave but opportunity is tight let's face it NY is not for family or to raise kids it's for business and that's exactly what many of is use it for

Comment by Donique Whonder on September 1, 2018 at 7:51pm
I can agree with last comment, people who want better will be better, reason why i am not there myself but the family and friends i worry about.

Comment by mr1stroke on September 1, 2018 at 7:48pm
Donique Whonder some of us are celebrating without worrying right now my family are having family reunion until Monday we will be going at it, the town out here has festival for the kids, mad clebration, we park every where we dont have side walk, we put sign for people to slow down think about living with that type of freedom without much worrying, it's example thsoe of us who want to celebrate left the nonsense behind.this is not something you can fix. Or any white cops will fix, even if they can they will not because more crimes mean more money in their pocket, those who wants to celebrate can walk away and find love in a new community among civilize people, or omplaint and wait to a the next you wouldn't catch me dead in NY this weakend too many other places are loving each other

Comment by Donique Whonder on September 1, 2018 at 7:42pm
Mr1stroke well it is obvious that most of us cant drop the foolishness and allow this to be special and that us very sad. It is sad that it even have to come to this point where we need the police to intervene. Every single solitary thing is not about the white man. Sometimes the focus can be directed on "why are we doing this to each other, why cant we celebrate without violence" for whatever reason some us cant get a grip and this action is important for the safety of innocent lives.

Comment by mr1stroke on September 1, 2018 at 7:35pm
Donique Whonder I used to live in NY in high school I read a book in title of the delicate balance it explains what will happen outside the bible by man made crimes I left NY when shot started to get crazy under Giuliani, if you are waiting for the white man to set control in order for you to enjoy, I guaranty you have more crimes to come, because they set the crimes, and if you can't live each other naturally it will never happen. Labor day used to be beautiful in NY all cultures come together that's how I met many good soul from all over, I hate to kill your hope, but it's done that event is an aopportunity for criminals they even plan their crimes and post them on Facebook and instagram, so it is over not even tag white men can help these savages with no respect for life since their lives have no values

Comment by Donique Whonder on September 1, 2018 at 7:33pm
Handsomeman did u read my post completely. You cant tell me nothing it is a fun and exciting time but on the same note alot of crime do happen even in people in they own family bbq get hurt. I know that as facts. So if an issue was not present then tell me why they are putting this action in place. Maybe u not from brooklyn so u dont know but i hear the gun shots and i have had to run out of scenes because things pop off. Not that these things dont happen any other night but it is very strange that it does on this night.

I guess you are the fake news people, because you are talking like many died at the events of thousands of people is propaganda. Do proper research and come again or is it because you aint caribbean so you clueless.

Comment by anwar on September 1, 2018 at 7:22pm
Most times the violence is created by non revelers and people who are not associated with Caribbean culture, who try to be Caribbean for the weekend to partake in their violent ideologies.

Comment by Donique Whonder on September 1, 2018 at 8:00am
@mr1Stroke most times you have awesome opinions and speak the truth. I dont know if you been to or grew up in new york but i grew up in east flatbush brooklyn and throughout the years juvet has become a dangerous night to be out and about almost like the purge. I have known many people by first name or friend or family of people that i know die on that night specifically because of non sense violence and i cant remember one time a murder was done by the police for this specific event. This one time i have to say it is over due and we need some sort of control put in place so we can enjoy our culture freely.

Comment by mr1stroke on September 1, 2018 at 7:39am
Jeffrey L Donovan you said all that about come together and all that people been saying since i was a kid it sounds good. But you agree with the decision of the white men to find ways for you to do it, what's the difference between the plantation and the slave watchers, if that's what it takes for negros to come together I don't want to be around them, that's not natural love thays why I stay away from uncivilize negros, they did all that last year 2 college students got shot and killed, the mother of the young men still seeking help to find her son killer, with all that security NYPD can't find the gun men, with all that security the governor lieutenant staff worker got shot, seriously you cannot teach someone who hate how to love, you can only teach those with love how to hate, niggers killing niggers are the same as those white supremacist, they are doing the same thing by hating their own kind, it's a cursed by the devil, not even God wants to free the people from their own hate, what other group of people just sit around killing each other for no reasons?