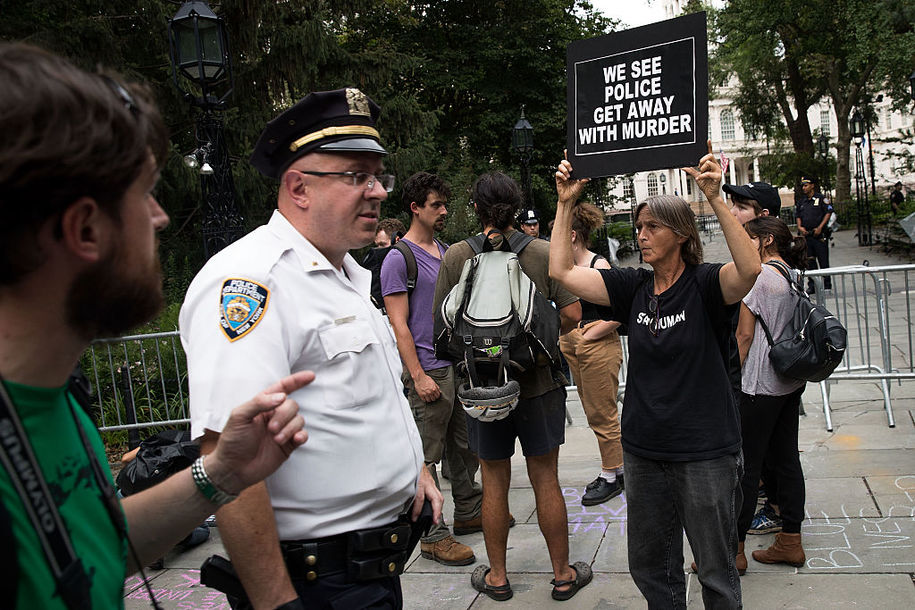 On July 4, 2016, New York City police officer Wayne Isaacs killed Delrawn Small in a shooting death that Small’s family and advocates say was nothing more than cold-blooded murder. According to Small’s girlfriend, Zaquanna Albert, who was with him at the time of his death, Isaacs cut them off in a road rage incident. When Small got out of the car to confront him, Isaacs proceeded to shoot him as soon as he approached the driver’s side window. He was off-duty at the time.

After being prosecuted by the attorney general’s office under a fairly recent executive order in which New York State is to investigate all killings of unarmed civilians by police officers in the NYPD, the case went to trial late last month. On Monday afternoon, a jury in Brooklyn found Isaacs not guilty of murder or manslaughter in the death of Delrawn Smith.

“We are disappointed by the verdict, but we respect the jury’s determination and thank them for their service,” Attorney General Eric Schneiderman said in a statement. “I also want to thank the family of Delrawn Small for their courage and perseverance in the face of tragedy. My office will continue to investigate these cases without fear or favor and follow the facts wherever they may lead.”

Isaacs’s version of the story is that Small was drunk when he approached the car—then threatened and attacked him and he was concerned for his safety. This makes a convincing story except surveillance cameras seem to show something different. They show Small’s being shot three times within seconds of approaching Isaac’s car. Small’s family is understandably devastated.

“What Wayne Isaacs did that night – immediately shooting and killing our brother as he approached his car and leaving him to bleed out and die, when he had so many other options – was murder, in cold blood,” [a statement released by Small’s brother and sister] said. “It is dangerous that once again a police officer is being treated as if they are above the law.”

They also called on Mayor Bill de Blasio and Police Commissioner James O’Neill to “immediately fire” Isaacs from the police department, calling him “a threat to public safety.”

Unfortunately, this is not new. In the statement about this case that they put out, the NAACP Legal Defense Fund reminds us that police officers are almost never held accountable taking the lives of unarmed civilians.

“Another trial for police violence, another officer acquittal.  Even as someone with great faith in the legal system’s ability to hold wrongdoers accountable, it is agonizing to watch officer after officer evade accountability.  This acquittal, on top of the countless others that have come before it, makes clear that the legal standards governing these cases of police violence must be corrected. As it stands, the law has afforded officers almost blanket immunity for taking the life of unarmed citizens.

“We know that Black men and women are far more likely to be victimized by police violence than individuals of any other race. Regardless of the race of the officer, we must confront the systemic issues that allow law enforcement to kill unarmed Black people with impunity.

It’s important and necessary that they acknowledged this happens routinely without respect to the officer’s race. Wayne Isaacs is black and so was Delrawn Small. This is a systemic issue. It is often coupled with internalized racism and the unchecked power of police officers that allows officers of color to harm and kill black men and women and other people of color. What we do know for certain is that this case will not evoke the usual conservative cries about “black-on-black crime.” To the contrary, they’ll support Isaac’s acquittal and tout the virtues of law enforcement officers. It will also fit their narrative that police brutality isn’t a problem and that systemic racism doesn’t exist. Meanwhile, until a jury finally gets it right, police officers will continue to experience deep mistrust and fear among communities of color until we know that they will finally be held responsible for their actions.

Comment by AV Redwood on November 16, 2017 at 3:45pm
Divine jackass! blaming the deceased

Divine God you have a bad disease called excuse-ittis, a disease you can die from cause you have an excuse for everything-----YOU DON'T GET IT IT AND ARE HOPELESS----POOF BE GONE

Divine God something is wrong with you for providing excuses for the cop. as a law enforcement officer he is supposed to be held to higher standards but nooooo just like the cowards they are, the first thing they reach for is a gun and use the excuse they feared for their lives, cop was wrong, PERIOD for killing an unarmed person

Comment by Divine God on November 13, 2017 at 9:01am
I agree that the cop had other options but so did the driver. While driving you don’t get out of your car to confront anyone about being cut off. Especially not in Brooklyn. If you get out of your car be ready to get it in. Sometimes I hate police for killing unarmed black men. But this situation was two wrongs. You could look hindsight and say cop had many options. But to leave your family in a car to confront another driver is crazy. I have been in road rage situations where if I had a gun the outcome would be someone getting killed. I think the cop should loose his job and not be allowed to ever own a fire arm. But to tell him that he had to wait to determine whether someone was armed or not is illogical. If he hit his car then the situation would be different, but to run up on car during a road rage situation is just not a good move. I am from NY lived in BK and I know the streets.