NYPD Cop Pistol Whips Unarmed 16-Year Old Boy After He Surrenders. While His Partner Punches Him, Knocking Out Several Of His Teeth {VIDEO} 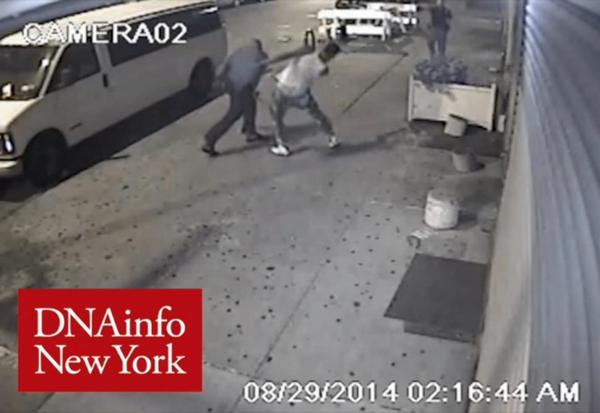 Two police officers in Brooklyn, New York were caught on tape physically assaulting a teenager who posed no threat to them.

16-year old Kahreem Tribble was allegedly spotted looking into the window of an unoccupied mini-van at 2:20 a.m. on August 29, according to DNAInfo. The officers get out of their patrol car and approach the teenager, who then tosses a bag of weed 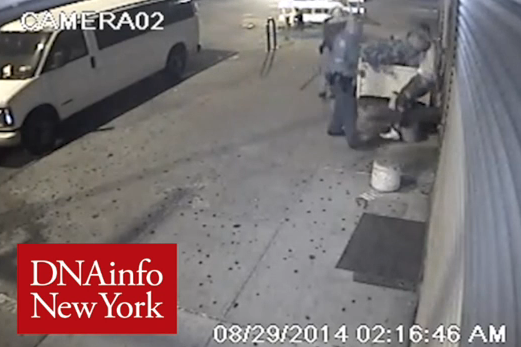 The unarmed teen stops walking and appears to be waiting to get arrested. At that point one of the cops, identified as Tyrane Isaac, takes a swing at him and misses. Tribble backs against a wall with his hands raised in the air. He gets knocked to the ground by Isaac.

The second officer, David Afanador, approaches and hits Tribble in the face with his gun, while Isaac continues to punch him with his fist.

Tribble is hit several more times by Isaac as he lay on the ground. He was eventually arrested for marijuana possession. 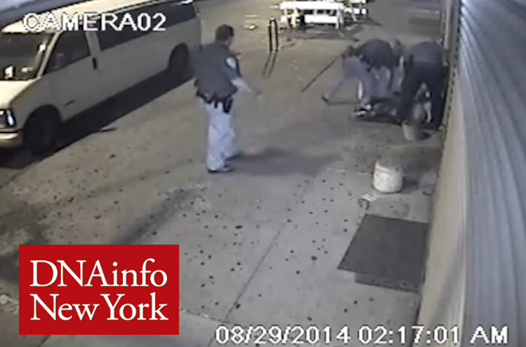 The entire assault was caught on a nearby building's surveillance camera. The footage is just now being released. The NYPD Internal Affairs Bureau has launched an investigation.

Afanador has been suspended without pay. Isaac was stripped of his badge and gun. He's been placed on modified assignment.

"The video recently came to light," NYPD spokesman Stephen Davis said. "Police Commissioner Bratton has seen the video and approved the decision to suspend one of the officers and put the other on modified assignment."

Several of Tribble's teeth were knocked out during the assault.

Both officers have been of the force for nine years. They are facing possible criminal charges and dismissal.

And still you black people don't do anything about it, maybe steal a tv

people keep saying not all police are bad, but my question is where are the good cops, i have yet to meet a good cop, if they are so good where are they, to me they are all waste of dirt

Watching this video really p***** me off...I am so freaking disgusted with how these azz wipes are allowed to get away with this type of brutal gang behavior....Phoney police officers like the ones in this video should be arrested and sent straight to prision without a trial...IMO, bullies are brave in numbers.

Comment by Diane Chinnery on October 11, 2014 at 7:20pm
Some policemen are tugs with a legal license to hurt and kill, sorry for the good cops for they will also get blamed, these cops is out of control everytime I read or hear on the news about police brutality something must be done about those bad apples. But remember karma is a b**** for God never slumber nor sleep.

whoa GospelPan and mr1stroke  I didnt say I was defending anyone! Im not at all defending the actions of the law enforcement officer in this video! I'm asking how do they know they are NYPD! If you say mr1stroke that they have been id and suspended then thats he answer im looking for thats all.

@action ok since they may not be NYPD officers, to you i guess all the network did not do they home work and release the wrong news, but NYPD is the same one who said those officers have been suspended, the DA now is investigating the case, the Mayor said the video clearly shows there is a problem with the dpt, the Commissioner says he really has prove that they need training, now can you tell us what other police dept we have in NY since all those people are lying, so if you are a cop, deliver this message to your fella officers to me they are all faggots, little girls who wear skirts behind doors, real man protect the innocents, not victimize those they suppose to protect, real man stand behind their actions, if you are man enough to commit the act you should be man enough to own and let every one knows you did because you are the f****** man, if you cant own it and have to lie like every time they kill someone they have some sorry  ass excuse that dont even make sense that makes them cowards, and faggots, you tell them that, and i say that to them anyway ate every rally, ask about me