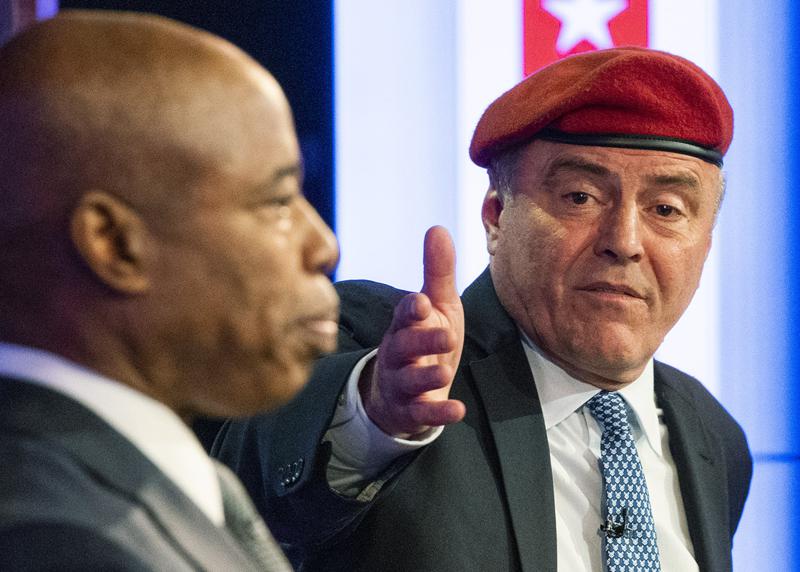 Republican candidate for New York City mayor, Curtis Sliwa, right, speaks during a debate with Democratic mayoral candidate Eric Adams in New York, Tuesday, Oct. 26, 2021. Campaign staffers for Sliwa say he has been hit by a yellow cab and taken to a hospital as a precaution. (Eduardo Munoz/Pool Photo via AP, File)

NEW YORK (AP) — Republican mayoral candidate Curtis Sliwa was hit by a yellow cab in midtown Manhattan on Friday, ending up with a fractured left arm, his campaign said.

Sliwa, the Guardian Angels founder who is on Tuesday’s ballot for mayor of New... was hit by a taxi near Rockefeller Center shortly before noon, senior campaign adviser Rob Cole said.

Cole said Sliwa suffered injuries to his arm and knee and was taken to Lenox Hill Hospital. Sliwa’s wife, Nancy, later issued a statement about the fracture and said he would get a sling before being released.

Sliwa was struck by the cab as he was on his way to a live radio show at WABC, his sister and spokesperson Maria Sliwa said. He completed the radio show and then went to the hospital, she said.

Sliwa did not file a police report about the incident, Cole said.

Sliwa himself tweeted, “Don’t worry, everyone. The taxi is okay.”

Hope all is well..