'No food, no drinks, no watermelon': Boston Museum apologizes to group of black schoolchildren for staff members' shocking racist behavior 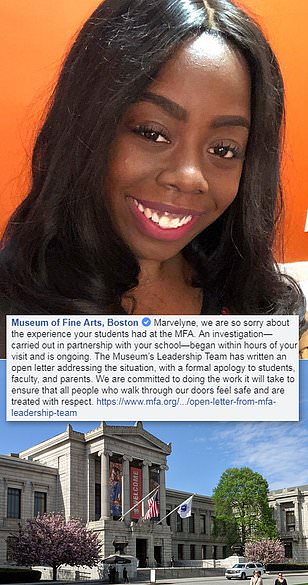 The Museum of Fine Arts in Boston has issued a public apology after a middle school teacher took to social media to claim her students had been subjected to racial abuse during a field trip last week.

Marvelyne Lamy, who teaches the seventh grade at the Davis Leadership Academy in Dorchester, Massachusetts, said that her students had been ‘racially profiled’ during an excursion to the museum on May 14.

The class, Lamy said, was made up entirely by black students and teens of other ethnicities. There were no white students in her tour group. 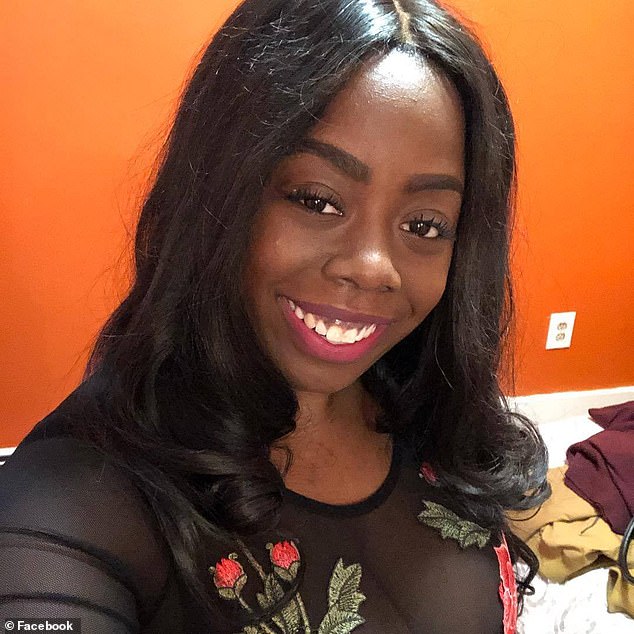 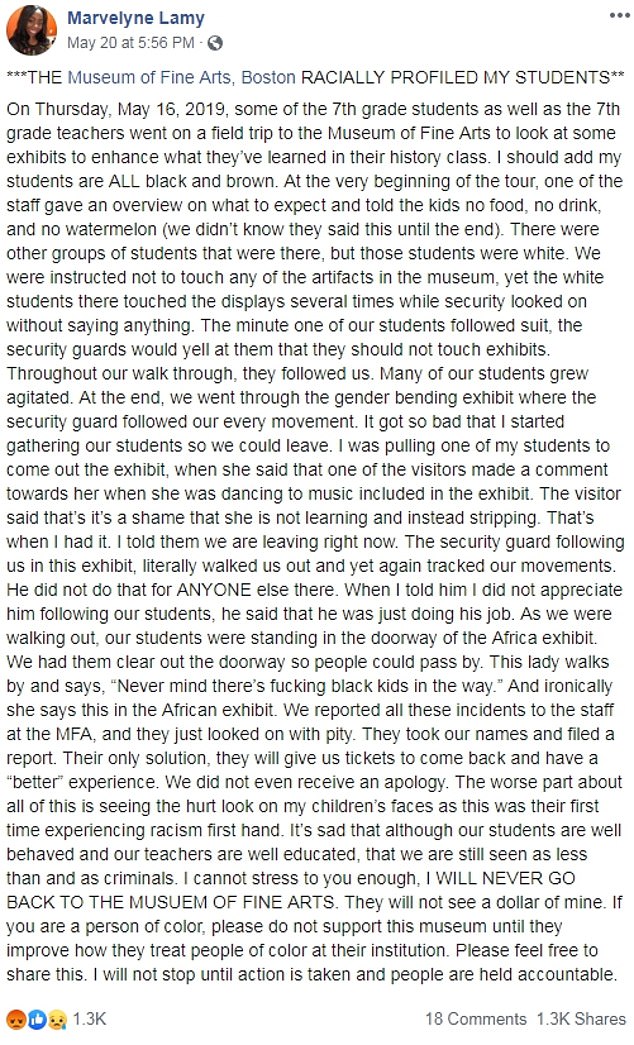 The class, Lamy said, was made up entirely by black students and other ethnicities. There were no white students in her tour group

Why is watermelon a racial slur?

The stereotype that African-Americans are obsessed with watermelons originated from the conclusion of the Civil War and the subsequent emancipation of slaves.

Upon obtaining their freedom, black Americans grew, ate, and sold watermelons – making the fruit a symbol of their freedom.

Threatened by their sudden liberty, white Americans responded by making the fruit a symbol of their black people’s perceived laziness, uncleanliness, and unwanted public presence at the time.

The racist trope then exploded into popular culture, obscuring its historical origins. 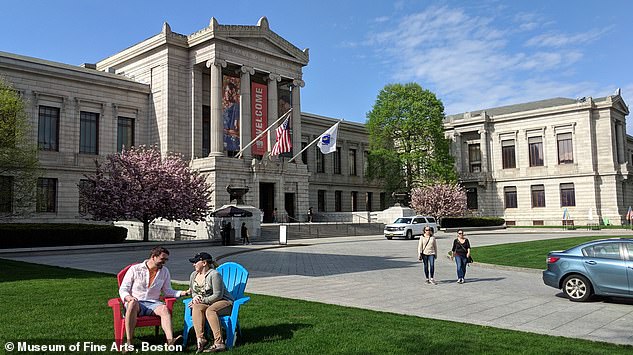 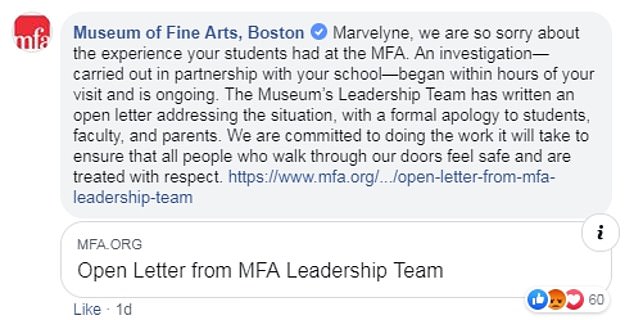 Comment by elinor goddard on May 29, 2019 at 9:20pm
Wake up and stay woke. Everyone knows that Boston has been and always will be racist . So what else is new .people needs to do their research on different groups of people and dig deep of how they were all treated do the foot work . And support our own and we will be better off . It's a new day

Stop trying to be included go to a African american museum and feel the difference, enough of the we should have equal seats at the table f*** em and build your own table.  Segregation was a good crackers realized they were going to lose economically if they didn't. This why its essential to create your own and support your own who support separation.  Should you have to do this of course not but this is the reality.

If most of this art was created by African descendants, there descendants or estate should remove the artwork from institutes that discriminate. We need to put our art in museums that are open to all. Boston is racist all around. Ask the ball players how they couldn't go out after dark. They have the nerve to discriminate against anyone who is of Irish descendants. I can pull up plenty of history of how their people where treated when they came to this country. People love to forget stuff like this. Asians forge that during war times they were put into detention camps like they do to the immigrants coming over the boarder now. PEOPLE LOVE TO FORGET WHAT THIS COUNTRY DID TO THEIR ANCESTORS!

@carimama most of the art in white museums is art created by African descent that was stolen and placed on display.

This is were some nice entrepreneur would gift this teacher and class who were discriminated against with a trip to The National Museum of African American History and Culture, in DC. Sad though that should be subjected to that. Shameful.

Ain’t nothing shocking about this. What’s shocking is us still putting ourselves out there, giving these pigs opportunity to harm us.

The qualified students of JEE Main and JEE Advanced are invited for JoSAA Registration 2019.The registration will be initiated by the Joint Seat Allocation Authority. Candidates can register themselves on the official website. After registration of JoSAA 2019, applicants will be able to take part in the 7 rounds of counselling and seat allotment. Thus it is mandatory for qualifiers to do JoSAA 2019 registration so as to obtain a seat in any of the 100 participating institutes.

Boycott that f****** place and let people from other nations know not to go there spread the word!!!!!