Nicki Minaj has something serious to say about race. We should listen to her

Minaj’s supposed ‘catfights’ – the latest at the VMA awards – are heavily reported. But the media rarely reflects on her astute political points

Why is it so hard to listen to Nicki Minaj? I don’t mean her music – which may or may not be to your taste – but to what she says? According to the headlines, she is causing more trouble, and is in another “catfight”. Last time it was with Taylor Swift, this time Miley Cyrus. At last night’s MTV Video Music Awards (VMA), she and Swift publicly made up, only for Minaj to “attack” Cyrus, who – although some say all these “confrontations” are faked – looked genuinely stunned when Minaj referred to her as a “bitch”.

The jibe was apparently in response to an interview Cyrus gave to the New York Times a few days ago, in which she said Minaj was “not very polite”, and explained to her the correct way to talk about race. “I know you can make it seem like, ‘Oh I just don’t understand because I am a white pop star’,” said Cyrus, before continuing, “I know the statistics, I know what’s going on in the world.” Cyrus won’t be winning any awards for self-awareness for feeling she could lecture Minaj on the polite way to discuss race. No wonder Minaj reacted. 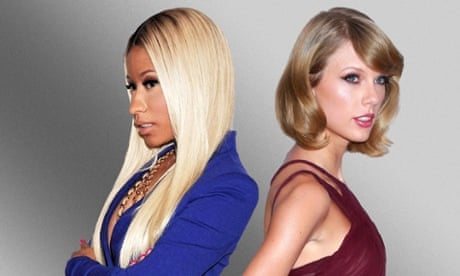 The Nicki Minaj debate is bigger than Taylor Swift's ego

When Minaj tweeted about black artists being sidelined by the music industry, it sparked an online spat with Taylor Swift. Didn’t the misjudged global reaction rather prove her point?
Read more

If anyone bothers to read between the headlines or just takes on board anything Minaj says, we would see that the focus on personal “beefs” is an unhelpful diversion. Minaj is political, and wants to talk seriously about racism. She won’t keep quiet about it. “Racism is alive & well” she tweeted last year. This was somehow seen as her having a go at Iggy Azalea rather than a mere statement of fact. Time and again she is portrayed as an aggressive, angry black woman who goes around picking on sweet white girls. Stereotyped much?

Minaj is an immensely skilled artist in “a culture that is”, she has said, “so male driven”. Her hypersexualized self-representation makes many uneasy, but this is her choice. She writes the words. She chooses the imagery. As she has said: “When you hear Nicki Minaj spit, Nicki Minaj wrote it.” She is in charge – in charge enough to question the structural racism of the music industry.

Her tweets questioning why her video for Anaconda was not nominated for the Video of the Year award at the VMAs – while videos which celebrated “women with very slim bodies” were – was taken personally by Swift, who tweeted: “I’ve done nothing but love & support you. It’s unlike you to pit women against each other. Maybe one of the men took your slot.” Swift later apologised. And last night they “hugged it out”. When Minaj isn’t writing or perfoming she consistently speaks out about what is happening in America. Last year she talked of police brutality and their complete lack of accountability. In an interview with Rolling Stone she said: “I feel like when Public Enemy were doing ‘Fight the Power’, we as a culture had more power – now it feels hopeless.”

The backdrop to all this is much more serious than the MTV Video Music Awards. In the US, black people are being murdered in churches and by the police. The openly racist rhetoric of Donald Trump is all over the airwaves. Kanye West says he wants to be president, while every political statement Minaj makes is somehow depicted as her just being an uppity b****.

Minaj can talk about race in any way she wants. The fact that the press focuses instead on “catfights”, tells us just this: she needs to keep talking.