Nick Cannon Sits Down With A Rabbi In Upcoming Podcast Episode 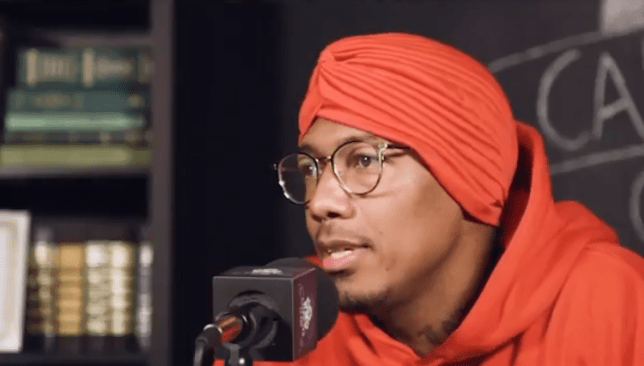 Nick Cannon is determined not to be canceled and has shared a teaser clip of an upcoming episode of his podcast -- where he is seen chopping it up with a Rabbi.

"I made a lot of people mad," Cannon says in the clip. "[I made] your community mad, I made my community mad by apologizing."

Rabbi Abraham Cooper then says, "the question in my community is 'is he sincere,'" regarding Cannon's recent apology.

"At this point, yes." Cannon replied. He later says, "I don't have hatred for any group of people but especially Jewish people because I feel like there's a connection."

Cannon was accused of making anti-Semitic remarks during an interview with Professor Griff. Cannon was quickly dropped from ViacomCBS despite offering several apologies.

"First and foremost I extend my deepest and most sincere apologies to my Jewish sisters and brothers for the hurtful and divisive words that came out of my mouth during my interview with Richard Griffin," Cannon wrote during a lengthy Twitter thread.

"They reinforced the worst stereotypes of a proud and magnificent people and I feel ashamed of the uninformed and naïve place that these words came from. The video of this interview has since been removed."

Nick Cannon has responded to ViacomCBS dropping him after he “failed to acknowledge or apologize” for spreading “anti-Semitic conspiracy theories.”

Cannon is under fire for calling white and Jewish people “lesser than” black people during his podcast “Cannon’s Class.” He also said melanin contains soul and compassion, which white people lack.

“Our melanin is soul power and it connects us in a way that the reason why they fear black…is the lack that they have of it,” Cannon said.

Adding, “Melanin comes with compassion. Melanin comes with soul, that we call it soul, we soul brothers and sisters, that’s the melanin that connects us so the people that don’t have it, are, and I’m going to say this carefully, are a little less and where the term actually comes from, and I’m going to bring it back around to Minister Farrakhan, where they may not have the compassion.”

ViacomCBS cut ties with Cannon following backlash he received over the comments, and condemned his “hateful speech” and failure to “acknowledge or apologize for perpetuating anti-Semitism.”

Cannon is now firing back at the company, taking to Facebook to request full rights to Wild ‘N Out, the show he hosted and produced for VH1, a ViacomCBS-owned cable channel.

“If I have furthered the hate speech, I wholeheartedly apologize,” he wrote in the post titled “Truth and Reconciliation.”

“But now I am the one making demands,” he continued. “I demand full ownership of my billion dollar Wild ‘N Out brand that I created, and they will continue to misuse and destroy without my leadership! I demand that the hate and back door bullying cease and while we are at it, now that the truth is out, I demand the Apology!”

Cannon went on to notes that ViacomCBS are an attempt to “make an example of an outspoken black man,” and that the company banned “all advertisements that supported George Floyd and Breonna Taylor who we are still seeking justice for.”

During his controversial podcast, Cannon spoke about the Rothschilds and “the bloodlines that control everything, even outside of America.”

He said that Black people are the “true Hebrews.”

In his Facebook post, Nick Cannon claimed he reached out to the company’s chair Shari Redstone “to have a conversation of reconciliation and actually apologize if I said anything that pained or hurt her or her community.”

Sean ‘Diddy’ Combs shared his support for Nick  when he tweeted “come home to [Revolt] truly BLACK OWNED!!!” He added: “We got your back and love you and what you have done for the culture. We are for our people first!!! For us! By US! Let’s go!”

You can watch Cannon’s full controversial podcast via the YouTube clip above.

Comment by mr1stroke on July 22, 2020 at 1:18am
Majority of negros are afraid to speak up by staying loyal to white people, they will be against you more than a white person, they will not back you up or stand with you, that's why as soon as a black person speaks up they threaten to take all from him or her and make them apologise, they will make you apologise when you are right jist to show you that you are not worth speaking. Its like, how dare you day such things

Why do we have to keep the truth hush hush, and then when a black celebrity speaks out on the truth they are made to apologize. We need to be completely open to telling the truth about all that we have been put through as a black race and who had a hand in it until this day. We will never come to a full circle if we keep backing down from the raw truth.

Here we go into this Rabbit Hole BullS@#$T...You can't serve 2 forces, you must only choose one...SMDH

I knew they were going to publicly make him look like the sold-out soul that he's trying to flee and/or hide from. SELAH

Nick get your own production like Tyler, I thought this show was your creation ?? They always come for us when we speak up, they hate to hear truths So glad Puff stepped up and offered a job,  Terry crews a fkg uncle Tom!

Comment by mr1stroke on July 17, 2020 at 8:07am
Thats what negros dont realise, you cannot say anything about jews and gays they will come for your life, the sad part there are niggers who will stand up to defend the jews and throw you in hell but will not do it for another black person, just about every n***** wants to see Bill Cosby and R Kelly perish not because they know the truth but because the white people or white media told them, they are happy to help destroy a black person of standing with you. Thats why i like the new ways of doing business i can speak my mind the way i want and do not have to apologize when i am right

Nick is Wild N Out!!!!!! He should have at lease had half ownership from the jump. The minute the show took off he should of had his lawyers locking those negations down. See what happens when you rely too much on the cave dwellers and the minute you talk about a Jew they try to shut you down.

Comment by vaughn mitchell on July 16, 2020 at 12:22pm
I hope he sues them for ownership of wild n out, if they do not give him back ownership.

Comment by mr1stroke on July 16, 2020 at 1:22am
Nick always stood for what he believed in even as a young boy, listen to his very first interview with flex when he did his rap album, when you're creative you can speak your mond and not behind afraid unlike those b**** niggers in Hollywood like Terry "f***** ass Crews" sucking dicks for jobs and roles how about you create your own

I like the fact that Nick demand an apology from Viacom instead of white people always making those b**** negros apologise even when they are right, but i dont know about the ownership because black men and women have let white people get away with blood by owning their works, thats how they build wealth they will not give it to you that easy, do the history majority of black men and women who demand the rights for ownership of their work have either disappear or murdered, they will come for your life so becareful brother and trust no one they will use those closest to you