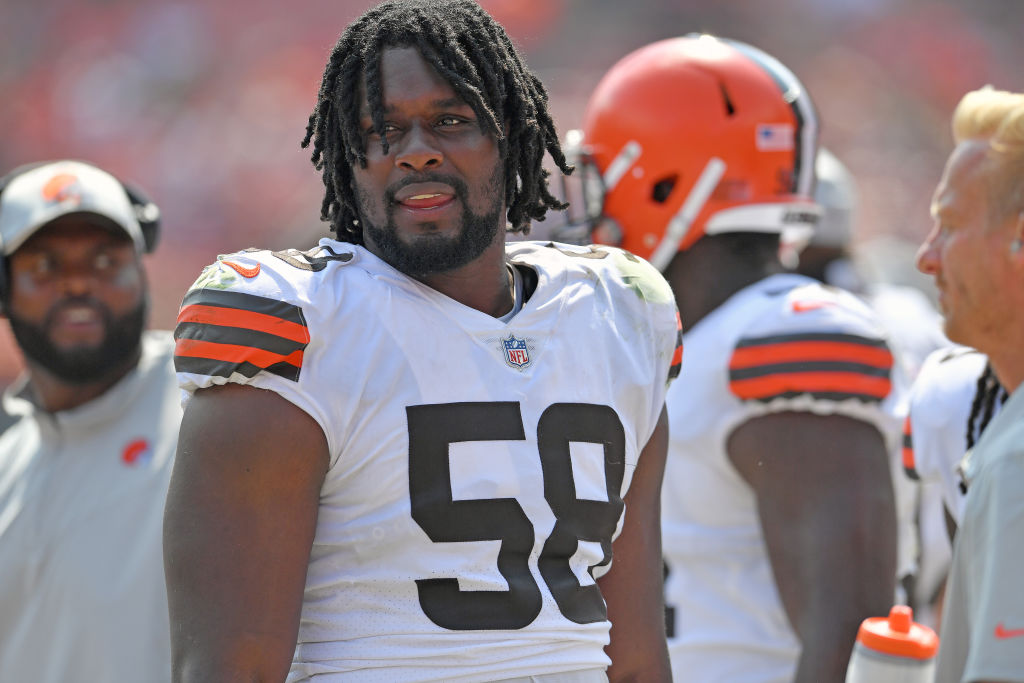 Cleveland Browns defensive tackle Malik McDowell was arrested earlier this week for being naked outside of a preschool in Florida. When police arrived at the scene, he attacked and charged at them — and it was all caught on camera.

McDowell’s mentor and high school football coach, Reggie Wynns, says the athlete told him he doesn’t remember the incident and the circumstances that led him back in jail.

Watch the clip below.

The clip, recorded by a bystander who was just feet from the altercation in Deerfield Beach, FL, shows McDowell was extremely aggressive before he was taken into custody. You can see McDowell — a 6-foot-6, 290-pound Cleveland Browns defensive lineman — sprinted at full speed toward the officer, eventually making contact with the man’s chest. McDowell then appeared to throw punches at the cop … before shoving him through a bush. McDowell then seemed to take off.

Officers had to use a taser to subdue McDowell before arresting him.

Via Local 10 news, a lawyer representing McDowell said in a preliminary court hearing that “somebody may have slipped him something or given him something that he wasn’t aware of, which explains some of this bizarre behavior.”

“I don’t know if someone laced him or what,” Wynns said. “I don’t know. That’s not him at all. All I’m hoping is that when they test him, they figure out that he had been drugged.

“You don’t do a great job for 17 games starting for the Cleveland Browns and then go to a training facility, and then you’re walking down the street [naked] and doing what he did. That doesn’t make sense to me.”

This is McDowell’s latest run-ins with law enforcement. He was arrested in September 2017 for DUI and in December 2017 he was charged with disorderly conduct. In February 2019, he was arrested after operating a vehicle while intoxicated, resisting arrest, and assault.

Also, because you're not seeing the devastating results of a worldwide stupor since this plandemic started on mainstream media, doesn't mean it's not happening.  Mainstream media only broadcast things to distract us not real facts.  So just look around and see that crazy is more present than at any other time before 2019.

Ya know Vaughn Mitchell, you would be very surprised as to what these vaccinations are doing to people's emotional state of mind.  So hey, it's your opinion that I'm stupid and I was dropped on my head okay, I'm fine with that.  But every since this Plandemic started, a whole lot of emotional distress has been on the uprise.  And since they started forcing people to take a jab, more crazy s*** is happening, but hey I'm stupid.  Just because some people take this jab and nothing happens, doesn't mean that other people aren't effected by it.  I guess I'm also stupid for noticing an uprise in HIV also.  And guess what, there are 3 different strands of HIV in said vaccine.  But hey, I'm stupid as a result of falling on my head.  Thank you for your observation.

Comment by vaughn mitchell on January 20, 2022 at 4:23pm
@Tyrone, I am blaming your stupidity, on the fact that you was dropped on your head when you was a baby.

Folks, I'm blaming this recent behavior on the vaccine.