Newark barbecue turns deadly when gunman shoots into a crowd 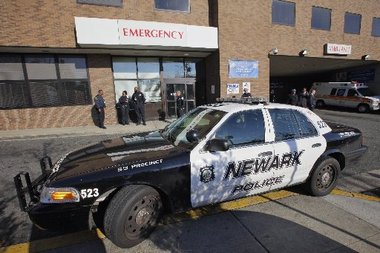 A 24-year-old Newark man was fatally shot in Newark on Saturday after a gunman shot into a crowd. Tony Kurdzuk/The Star-Ledger NEWARK — A gunman who shot into a crowd that gathered Saturday night for a barbecue killed one man and injured two others, according to the Essex County Prosecutor's Office. The shots were fired around 10 p.m., as the barbecue was ending, in front of 288 Wainwright St., according to the prosecutor's office. No one at the house answered the door this morning. A barbecue grill could be seen in the back of the house’s driveway. Two men, who have not been identified, were taken to Beth Israel Hospital, and are in stable condition. A third victim, Wysan Thomas, 24 of Newark, was taken to University Hospital where he died shortly after his arrival, the release said. Neighbors couldn’t recall any commotion before the shots were fired, and they said most residents had stayed indoors because of the heat. They weren’t able to provide more details of the shooting or the cookout. Police said they do not have a motive or a suspect at this time. Two investigators with the Essex County Prosecutor’s Office returned to the crime scene this afternoon, scouring the front yards and pavement of Wainwright Street for any more clues.

@Big F* remember the part  in the great debaters when Denzel said the easiest way to break a person is the will to fend for themselves!!!! Welfare hummmmmm

@ barbara and alfonso, I agree but the system play a big role in why Newark is the way it is now. I bet you that you won't hear about any of them cities where it's mostly whites living turning like Newark. I feel like if you can keep a city clean and with less crime then you can do the same to any city no matter how big or small a city is. Remember earlier I spoke about the national guards? Well if they wanted to clean Newark up a little and bring some peace back to Newark then they would of called them in. We can't count on the police officers because some of them is part of the problem, we can't count on the people because most of them is the problems and the ones that's not the problem don't "see nothing or hear nothing" because the system won't protect them like they suppose too. If you notice in the city of Newark and the surrounding cities it's like they take a group of race and place them in curtain parts, just like we talked about earlier you got the blacks here, the whites here, the puerto ricans here,, and so on. It's like back in the day when I was a kid and I'm out side doing something I have no business doing and get caught by the lady down the block, she can pop me and then she take to my mother and tell my mother and then my mother bet my ass. Well it's not like that any more, even if the lady down the block know your mother real good and she see you doing wrong she better not put her hands on you or even tell your mother because these young mothers today want to beat your ass for even touching they child and they believe they child do no wrong. Newark today probably would never be like it use to be unless the people of Newark change it because we can see now that the system not even trying to change it. Just think, they put cameras up all around Newark to catch a person running a red light so they can send them a high ass ticket in the mail but not one killing they can say was caught on camera, that's because they don't care about that s*** all they care about is getting money instead of saving lives. But, the s*** that piss me off is that most of these young and older black men out here in Newark know the system game plan and instead of them beating the system they just letting the system won every time. Answer this, how do drugs get into the streets of Newark? How do guns get into the streets of Newark? They worried about fighting wars and winning in other countries but they not even fighting and trying to win the war in they own damn country. Newark is like any other city in the United States, once you take out all the good things to do and replace them with all the bad things to do then you are going to get a bad city. Right now the only thing to do in Newark is drugs, drink and party. I remember when the clubs and bars was jumping only on the weekend but now them s**** jumping everyday of the week. Then the system put it in these young girls head that if they go out and have kids then they will just give them anything they need from money, food stamps, health insurance, phones, apartments, and they got some s*** now where they would even pay your cable bill. Now tell me, if they got the system taking care of them like that then what is really pushing them to go out and get a job to better they self. I'm not saying that they should take the help away because there are people out there that really need it but they do need to limit the people who they give the help to because most people are just using the system. Now the people that work they don't give no help too, all they get is a copay every time they visit the doctor, high ass rent, HIGH ASS PSE&G bill, high ass cable bill, and in between all that you got to buy food. See, the system is as backwards as it can be!!!

BUT YALL HAVE TO REALIZE NEWARK HAS A NEW BREED OF PEOPLE??????

Alfonso I don't know what it is now to some but to me !!! It's still a oasis compared to Trenton!!! LOL okay just kidding to a point na!!!! I can get to any where in the US from Newark all major interstate ,route,or highway connect off of one our thru ways and I always looked at Newark as they great escape you know!!!! Even with all the bloodshed and bullshit you could always escape even if it was a roof top or a park ,fire hydrant or hell even penn station you could just always escape!!!! I do miss the old days but Essex County on a whole no other place like it !!!! Bless

@everyone, my email  inbox was full...hahah, nice to see you all have good memories.

@aunty babbs, i am sorry for your loss.