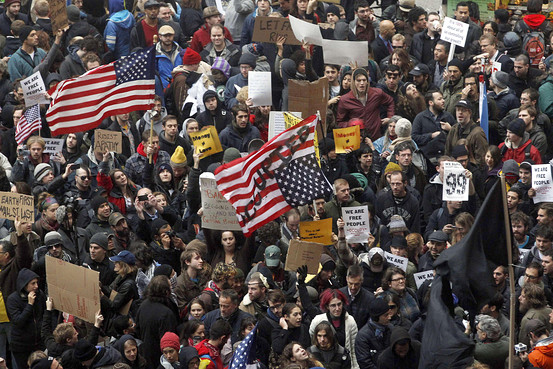 Thousands of people have gathered near the former home of Occupy Wall Street in Lower Manhattan to start a citywide day of demonstrations to mark the movement’s two-month anniversary, blocking streets and sidewalks and facing an army of police in riot gear and on horseback.

The plan is to march on Wall Street from the area around Zuccotti Park, the site until Tuesday’s eviction of the protest encampment, where activists plan to disrupt the start of the work day. So far, after more than 60 days of protest activity nearby, a heavy police presence and a warren of barricades have kept protesters from holding serious protests on Wall Street itself. 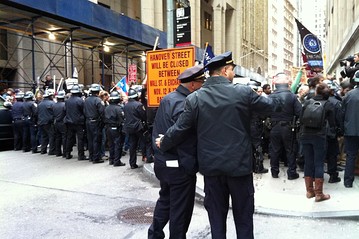 At 7:40 a.m., however, a group of hundreds began to stream down Cedar Street chanting “Shut down Wall Street.” The group turned onto Nassau Street and headed to Wall Street.

Police used motorcycles and other vehicles to block the march’s progress on Nassau Street, where a mass of demonstrators chanted “We are the 99%.” Elsewhere, police on horseback worked to control the crowd.

Police dressed in riot gear have blocked Wall Street at the corner of Hanover Street, where a group of people shouting “Wall Street’s closed” blocked the barricade.

“I’m hoping they see that they are being held accountable to the 99%,” said Katie Ferrari, 23 years old, who works as an artist and graphic designer.

Ferrari, a Queens resident, said she had been linking arms with other protesters to stop commuters from entering the blocked street. Police then cleared the sidewalk, she said, pushing and knocking over some protesters.

Matthew Schmidt carried a sign that reads “Greed does not equal love” as he marched.

“I have a job, I pay my bills,” said Schmidt, a 38-year-old actor and a bartender. He said he understood why the police swept protesters out of Zuccotti Park on Tuesday but faulted their tactics. “I think it was done a little abruptly. A lot people were hurt who didn’t need to be hurt.”

Zack Helwa, 27 years old, said his biggest fear is the police response to Thursday’s protest activity. “I’m hoping to achieve less police brutality,” he said. “I think now [the protest] gathered more steam because of what happened with the police brutality.”

The day’s events will test both the movement’s resilience following its eviction from Zuccotti Park and New York City’s ability to deal with the decentralized protests. Following the march on Wall Street, protest organizers are urging people to gather at transit hubs in each of the five boroughs. They’ve also called for student walkouts.

Then, protesters plan to take trains to Foley Square, in Lower Manhattan. While on the subway, groups will talk about economic inequality, one organizer said.

At Foley Square, plans call for a large rally that is being backed by some of the city’s largest unions, one of which has obtained a permit for the rally. Protesters then plan to march across the Brooklyn Bridge’s pedestrian path. The events are tied to the Occupy Wall Street movement’s two-month anniversary.

let's see how many ppl hang their hats where they can't reach this holiday season.

your POWER is in your habits... spending/buying habits aka CONSUMERISM

we have the power in our hand, don,t give up keep on fighing for our rights ,stay home on black friday

No Christ is not coming to judge any one dead or alive!!!!!!! I say power to the people more people should go to Occupy Wall Street, you know why. THE  AMERICAN GOVERNMENT SPENT TWO HUNDRED AND EIGHT THOUSAND BILLION DOLLARS ON A WAR IN IRAQ. AND NOW WE ARE ALL SUFFERING.  IRAQ HAD PROBLEMS AND STILL DOSE BUT THEY NEVER DID ANY THING TO THE REST OF THE WORLD I SAY MORE POWER TO THE PEOPLE.............F*** THE 1% LET THEM WORK FOR THEIRS.

These people are fooling themselves. Though some may really mean well. Change is gonna come when Christ return to judge the living an the dead. As for a human form of change, it's gonna be bloody. no blood, no glory.

Comment by www.jaxsprats.com on November 17, 2011 at 10:11pm
This is the power of the people...the REAL time for change campaign.