National Stadium Being Used As A Temporary Prison in Jamaica... 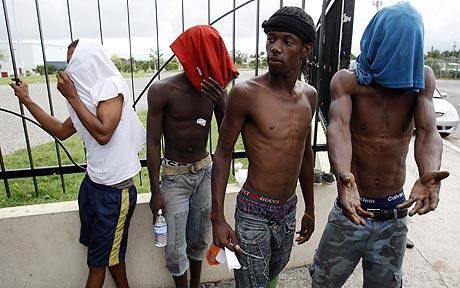 With some 600 prisoners to deal with – a result of the military assault on the stronghold of the drug baron Christopher 'Dudus' Coke – the authorities in Kingston have followed the lead of Augusto Pinochet, who used the football stadium in Santiago as a temporary prison during the bloody aftermath of the 1973 coup in Chile.

Ann-Marie Williams was one of those waiting for news. She last heard from her 18-year-old son Jeff on Monday, shortly before police and soldiers stormed the Tivoli Gardens quarter of the Jamaican capital in pursuance of a warrant granted for Coke's extradition to the United States on drugs and weapons trafficking charges.

He could be here, he could be dead, I don't know," she said of her son. "You ask for information and get nothing."

Heavily armed police guarded the gate to the stadium, a short distance from the city centre. Its use as a prison is another manifestation of the state of emergency declared in west Kingston, which has resulted in Tivoli, a compact collection of slums, being sealed off from the outside world, together with another enclave, Denham Town. While Coke, alleged head of a criminal empire stretching from Kingston to New York, remains at large, the people of Tivoli, the vast majority of them innocent people, are imprisoned, short of food and water, and surrounded by the wreckage of a battle that has claimed the lives of more than 70 civilians, one soldier and two policemen.

Many Jamaicans, particularly the middle class, support the hardline stance adopted by the Labour administration of Bruce Golding during the last week, regarding it as a necessary evil in the fight against the criminal gangs whose tentacles stretch into all corners of Jamaican life, not least politics. But there is disquiet also at the scale of the carnage inflicted on Tivoli, with accusations that the security forces have used excessive force in clearing the area, including summary executions.

"People have told me that soldiers would tell a boy he was free and he could run away, and when he was running shoot him the back," said Mrs Williams.

Certainly, there are curious features to the four-day operation, which has seen Kingston's hospitals overwhelmed by an influx of wounded, including children caught in the crossfire. Tivoli was portrayed as a virtual fortress, populated by gunmen loyal to Coke, regarded as the most powerful of Jamaica's crime dons. But as of yesterday just six weapons had been recovered by officers conducting house-to-house searches. Six weapons and 73 dead.

"Why so many deaths for one man?" asked Joan, a 19-year-old resident of Tivoli whose brother was killed by security forces. "He (Coke) surely far away, outta Jamaica."

Calvin Higgins appears to have been another innocent victim of trigger-happy soldiers. The 52-year-old former security guard is believed to have been taking rubbish out of his yard when he was shot in the head by solders guarding Kingston's main hospital. Following the shooting, on Tuesday, Mr Higgins's body was left lying for hours in the street.

"It was just murder," said his son Marvin. "I do not know of my father ever having had trouble with the police. They were telling people to stay off the street but they were also allowing people to go to work."

Mr Golding's seeming determination to crack the power of the dons stems in part from persistent allegations regarding their influence over elected politicians. Gangs tend to divide their support between the ruling Jamaica Labour Party and the National People's Party, operating at the grassroots to ensure discipline among voters. In return they benefit from government contracts, taking turns to enjoy the favours of their adopted parties. Mr Golding, whose constituency includes Tivoli, has strongly denied an allegation made by the American television network ABC that he is a criminal associate of Coke.

Mr Golding has been strongly criticized by his predecessor as Labour prime minister, Edward Seaga, who claims that the real death toll from the fighting is more than 100, some victims being buried secretly by the security forces. Amnesty International has also called for an investigation into alleged "extra-judicial killings" by the police and military.

The United States has strongly supported the operation, however, providing flak jackets for troops and police, and surveillance assistance in the shape of P-3 Orion aircraft.

Comment by Cory Spangler on June 9, 2010 at 4:29pm
wow everyone moaning about the criminals in Tivoly that are dead , what about the business ppl who these thugs harassed,beat,killed over the years ? Drastic measures must be taken for change to take effect , Dudus was just a necessary excuse for house cleaning. This guy had the whole country of Jamaica in the palm of his hand

Comment by Kaidean Savage on June 2, 2010 at 10:42pm
This video is an eye opener. Really frightening. Slight note. Firstly, it is the National Arena and NOT the National Stadium that's being used. Secondly, it cannot be described as a prison. A prison holds convicted persons serving a sentence. The place is a detention centre.

Comment by Victor Trim on May 31, 2010 at 8:14am
I dont think the carnarge caused by the so called search for Dudus will end here. There must be ramifications that will effect the whole of the Carribean. My only hope is that the various Governments especially in Jamaica, learn from this very bad experience that the poor must be attended to or as the great Bob Marley said - Rich and Poor will start to cry. The rich will never be secure while the poor continue to suffer as sudden calamity will occur. THIS TRAGEDY IS JUST A WARNING TO COME THAT WILL EFFECT ALL!

Comment by jempress on May 30, 2010 at 6:13pm
If people were not scared and it was not a "taboo" to tell on people, the devestation would not be as bad as it is. Black peopel regardless of location have the code of synching, informa etc. By building into the culture that it is bad to tell on others then when shyt goes down who is truly innocennt ?????? If everyone knows whats going down and no one tells then they are just as guilty. Food for thought