Tina Ring & Ashley Lee: 5 Fast Facts You Need to Know——how dare they use their 2nd Amendment right to protect themselves (posters sarcasm), they should have waited for police to come instead of defending themselves

Ashley Lee, left, and her mother, Tina Ring, fought of an armed robber at their Tulsa, Oklahoma, liquor store, shooting him multiple times before he fled.

A mother and daughter fought off a robber armed with a sawed-off shotgun at their family’s liquor store, shooting him multiple times before he fled, police say. The harrowing incident was caught on the store’s security cameras.

Tina Ring, 53, and her daughter, Ashley Lee, 30, were working at Forest Acres Liquor in Tulsa, Oklahoma, on February 22 when the incident occurred. Police say the suspect, Tyrone Lee, checked himself in to a local hospital with four gunshot wounds and is expected to survive.

Both women shot Lee during the incident, police said.

“I think I’m still in shock,” Tina Ring told the Tulsa World on Saturday. “I don’t think I have really processed everything yet.”

The suspect is believed to be connected to a string of several armed robberies in the area in recent weeks, police said.

The entire incident was recorded on the liquor store’s security cameras. You can watch the video above. Ashley Lee can be seen behind the counter of the store as the masked robber, identified by police as Tyrone Lee, 36, no relation to Ashley, walks in holding a sawed-off shotgun. Lee takes cover behind the counter as the suspect points the gun at her. She keeps her hands up and backs away as he takes money from the cash drawer and walks out about 45 seconds after coming into the store.

Ashley Lee then quickly moves back behind the counter and grabs a handgun, which she gives to her mother, Tina Ring. They duck behind the counter as the robber comes back in, stole holding the shotgun. Ring then shoots the suspect and he runs out of the store as Ring fires a second shot and then a third.

As Ashley Lee, who had retrieved a second handgun, calls 911, the suspect returns to the store, this time without his shotgun. The wounded robber begins to struggle with Ring, who is still holding her gun. As he trie to take the weapon away from her, Ashley Lee fires and hits him in the back at point-blank range. He continues to struggle with Ring and eventually takes the gun from her and strikes her in the head. Police say she suffered a gash to the head and is recovering after receiving treatment at the hospital. 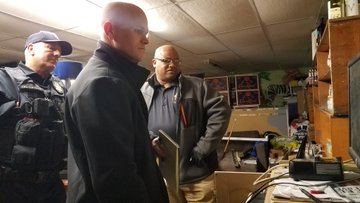 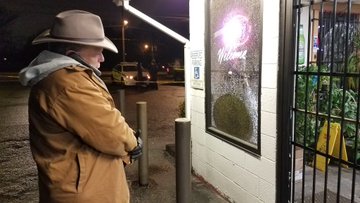 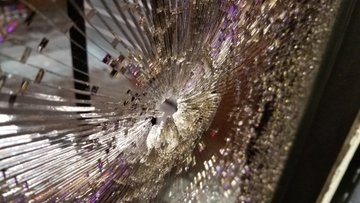 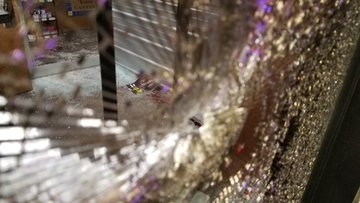 Homicide, Robbery, and Crime Scene Detectives are still collecting evidence from the Robbery. As of this posting, the suspect is still alive in an induced coma.

He tries to shoot Lee, but the gun was empty at that point, police said. Already suffering from multiple gunshot wounds, Tyrone Lee falls to the floor. The women then flee from the store and the suspect later follows.

Tulsa Police said he later turned up at a local hospital suffering from multiple gunshot wounds.

2. Ring Says She Didn’t Want to Let the Robber Hurt Her Daughter, While Lee Says ‘Until You Have a Gun Waving at You, Don’t Know What You’re Gonna Be Thinking’ 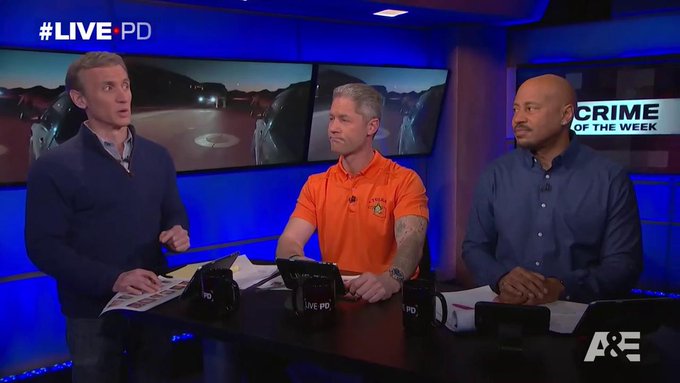 Crime of the Week

Check out this exclusive interview with the mother and daughter who fought off their attacker! #LivePD

Tina Ring told the Tulsa World, “I didn’t want him to hurt my daughter. That was my main thought.” She said they tried to give him the money and get him out of the store, but then he came back.

“All I was thinking was ‘Just give him the money and go,’ and next thing I know, I see him back in my face,” Ring told the newspaper.

Ashley Lee told ABC News, her mother, “was all I could think about,” during the horrifying experience. During an interview Sunday, Ring said that Lee, “saved my life,” and her daughter responded, tears in her eyes, “you saved my life.”

Ring said she just wanted to keep her daughter safe.

“The next thing I know that I have my gun and I’m shooting him. And I get up and I shoot him again, and he just keeps coming back to me,” Ring told ABC News.

Lee told ABC, “Until you have a gun waved at you, you don’t know what you’re feeling or thinking. Looking at my mom’s face, it happened so fast, but it seemed like it lasted for so long.”

Ring added, “At one point I remember telling him, ‘just go,’ because we gave him the money. I recognized him, and I told him, ‘I recognize you, what are you doing? Why are you doing this?’ I don’t know why he came back in.”

Ring said she didn’t want to shoot him, she was just doing what she had to do to protect her daughter.

3. Police Say They Believe Lee, Who Remains Hospitalized, Has Been Connected to a String of at Least 10 Robberies in the Area

Tyrone Lee remains hospitalized in critical condition, but is expected to survive, authorities said. Tulsa Police initially thought Lee would possibly not survive the shooting, but his condition improved while at the hospital.

Police said they believe he is connected to at least 10 other robberies in Tulsa and Tulsa County carried out by a man armed with a sawed-off shotgun.

Lee, 36, also has been arrested at least twice in Tulsa, past mugshots show. His full criminal record wasn’t immediately available.

We’re out at the scene of an attempted armed robbery at 1275 S. Memorial. A black male came into the store with a shotgun. An employee at the store fired shots at the Armed Robbery and he then fled the scene… pic.twitter.com/8MV0DF6un3

a black male matching his description showed up at a local hospital with multiple gunshot wounds and is in critical condition…more updates and clarification as it becomes available.

“It does appear this is the guy we’ve been looking for, for the last couple of weeks,” Sergeant Brandon Watkins told KTUL-TV. “He’s done multiple robberies here in Tulsa as well as up in the county.”

Watkins added, “I wish we’d got to him first. I mean, he’d be alive right now. Or he would be in better shape than he would be now.” But the case isn’t over; there’s still work to be done. We’ve got to A, figure out who this guy is. Then we’ve got to piece together what exactly happened tonight, then we’ve got to put this in order with all the other stuff that we’ve had from the past on this guy.”

Lee’s aunt, Corrine, went to Forest Acres Liquor to apologize to the family.

“I just wanted to apologize for him because I know him. I raised him,” she told KTUL-TV. She added that she hopes he gets the help he needs. “I’d been trying to call him no answer. I knew something wrong. …He’s sick and I pray they get him some help

Justin Christian, Tina Ring’s son, told the Tulsa World, “I hope he stays in the penitentiary and I hope he gets himself some kind of help.”

4. Ring & Her Family Have Owned the Store for Several Years & Her Son Says They’ve Never Been Robbed Before

Justin Christian, Tina Ring’s 33-year-old son, told the Tulsa World that the family has owned the liquor store for several years and has never faced a violent robbery before. He said they have had people steal bottles and have had their windows smashed twice, but this was the first incident like this.

He told KTUL-TV that people know they have guns in the store.

“We pretty much kinda let everybody know by putting signs up like that we are packing and we know what to do with them,” he told the news station.

Christian, who reopened the store Friday, just hours after the robbery, told the World, “You got to do what you got to do to protect yourself and other people.”

He told KJRH-TV, “You’re not going to scare me off from my store this is what feeds my family this is what pays my bills.”

He said he doubts anyone will try to rob their store again.

“They did what they had to do to stop someone that needed to be stopped,” Christian told KTUL. “They fought for their life … had my mom not made sure that the pistol she shot was empty, he tried shooting my sister with it point blank. It could’ve turned out different and worse and I’m sure glad it didn’t.”

5. Lee, Who Is a Mom Herself, & Her Mother Have Been Receiving Support From Around the Country After the Terrifying Incident

Ashley Nichole Lee, who herself has children and is married, said in an interview that she doesn’t plan to return to work at the family’s store after the terrifying incident. But she and her mother have received support from around the country.

“With woman like these, makes you feel safe to come in and grab your beverage of choice after a hard weeks work with out looking over your shoulders,” Anthony Scott Broadway wrote on the Forest Acres Liquor store’s Facebook page.

“Great job defending yourselves ladies. No victims in YOUR world,” Rob Mulligan wrote.

Michelle Chandler wrote, “When in Tulsa I will Always use this store !! It’s safe ! and protected ! God bless you (women)!”

They have received negative comments and Lee responded on a local news station’s Facebook page, saying, “Y’all have no idea what I or my mother endured. Until you’ve been through something like that… please. I love my mother and wanted to do nothing more than to protect. It was hard.”

Her husband, James Lee, commented, “My wife and her mom are the toughest women I know and I’m so proud of them if you have watched the video then you know that and we are so blessed that the outcome is what it is, I could not imagine life without my best friend and wife they are both amazing women and did not deserve this. Thank you all for your prayers and positive words they both need them right now.”

Police also said they did what they had to.

“The clerks did an outstanding job of fighting him,” Tulsa Police Sergeant Dave Walker told KJRH-TV.

Lee barely got out with her life, her brother told the news station.

“He reached over, she ducked and fired again, and of course the gun’s empty or else my mom and sister would be dead,” Justin Christian said. “What they’re showing on TV ain’t the real deal when you really watch it and know it and clean up the blood, and really understand what happened.”

He said Tyrone Lee wanted to kill his mother and sister.

Comment by vaughn mitchell on February 26, 2018 at 7:52pm
She did what she was suppose, now those gun, loving NRA, will use this as an example to buy more ar15, guns, and guess what white people will end up using it against each other.