More Than a Week After Irma, St. Martin Is Still Trying to Survive 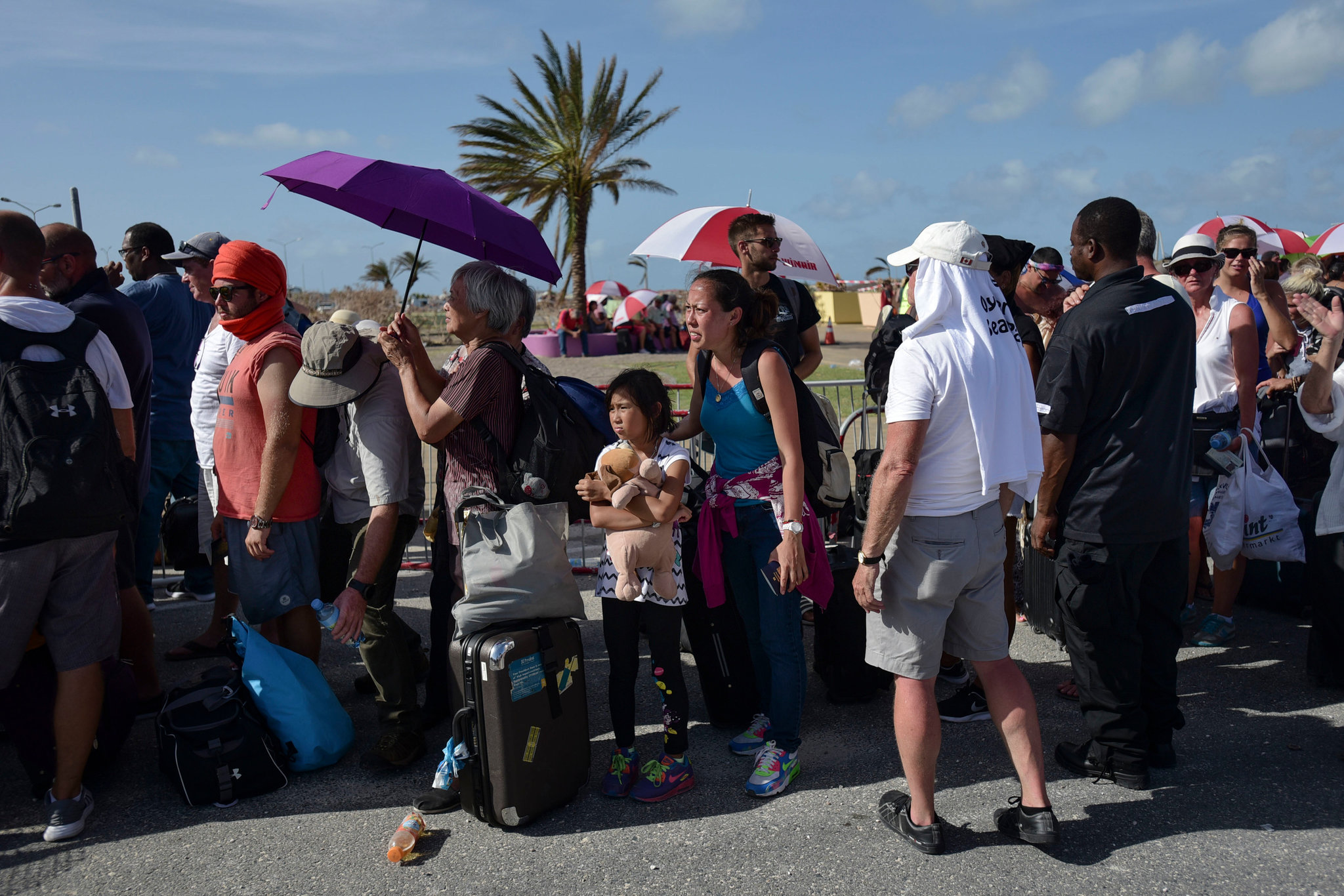 People on St. Martin waited to be evacuated by the United States Air Force on Monday. CreditCarlos Giusti/Associated Press

GRAND CASE, St. Martin — The woman carried a small suitcase, enough for her and her child to try to start over.

The arduous passage to evacuate her broken island was nearly done — through the chaos of a port filled with capsized boats, the traffic-choked drive lined with buildings and homes torn from their foundations, and the desperation of the masses at the airport, hoping to flee the wreckage as armed soldiers kept order.

But as the evacuees finally prepared to board their flight, the airline announced that they could not take their suitcases with them. The woman, a civil servant, fell apart.

“I can’t take it anymore,” she screamed, crumpling onto the tarmac and pounding it with both hands. Her home destroyed, her child forced to seek even the most basic things elsewhere, her country reckoning with the staggering task of rebuilding and, in the much more immediate term, simply surviving.

A soldier rushed to comfort the woman while her daughter broke into tears, fighting with the attendant to keep her mother’s bag, a final indignity in a world stripped of its moorings.

Life, for now, is a fragile thing on St. Martin, one of the Caribbean islands hit hardest by Hurricane Irma. I first came here shortly after the storm, when severe food and water shortages were tearing at the social fabric, leaving residents to scavenge for food and, in some cases, fight over what little remained. Now, more than a week after the hurricane, a delicate order has been restored, for the most part.

But there is still almost no fuel or electricity, and food delivery, for now, remains erratic. A near total communication blackout throttles the island. Almost all of the schools are destroyed and will be closed for months, at best.

Hourslong lines wind through the port, as families, tourists and migrant workers alike wait for aid, receiving an odd assortment of items that on some days include frozen chicken and a three-pound bag of mozzarella cheese — on an island with no power and few working appliances to cook or refrigerate them.

With little phone or internet service, residents rely on chance encounters to learn the fate of their neighbors and loved ones. Just outside the local government’s makeshift emergency headquarters, a shriek rang out above the blare of car horns. Luce Kabache, the principal of a kindergarten who survived the storm with her family by hiding in a closet, saw one of her students and her parents passing in a vehicle. They stopped instantly, threw open the doors, ran into the street and embraced, weeping with relief.

The island will have to start from scratch, creating itself anew, physically and psychologically. Tin roofing and smashed concrete line practically every street and alley, the disembodied bits of what was once a haven. 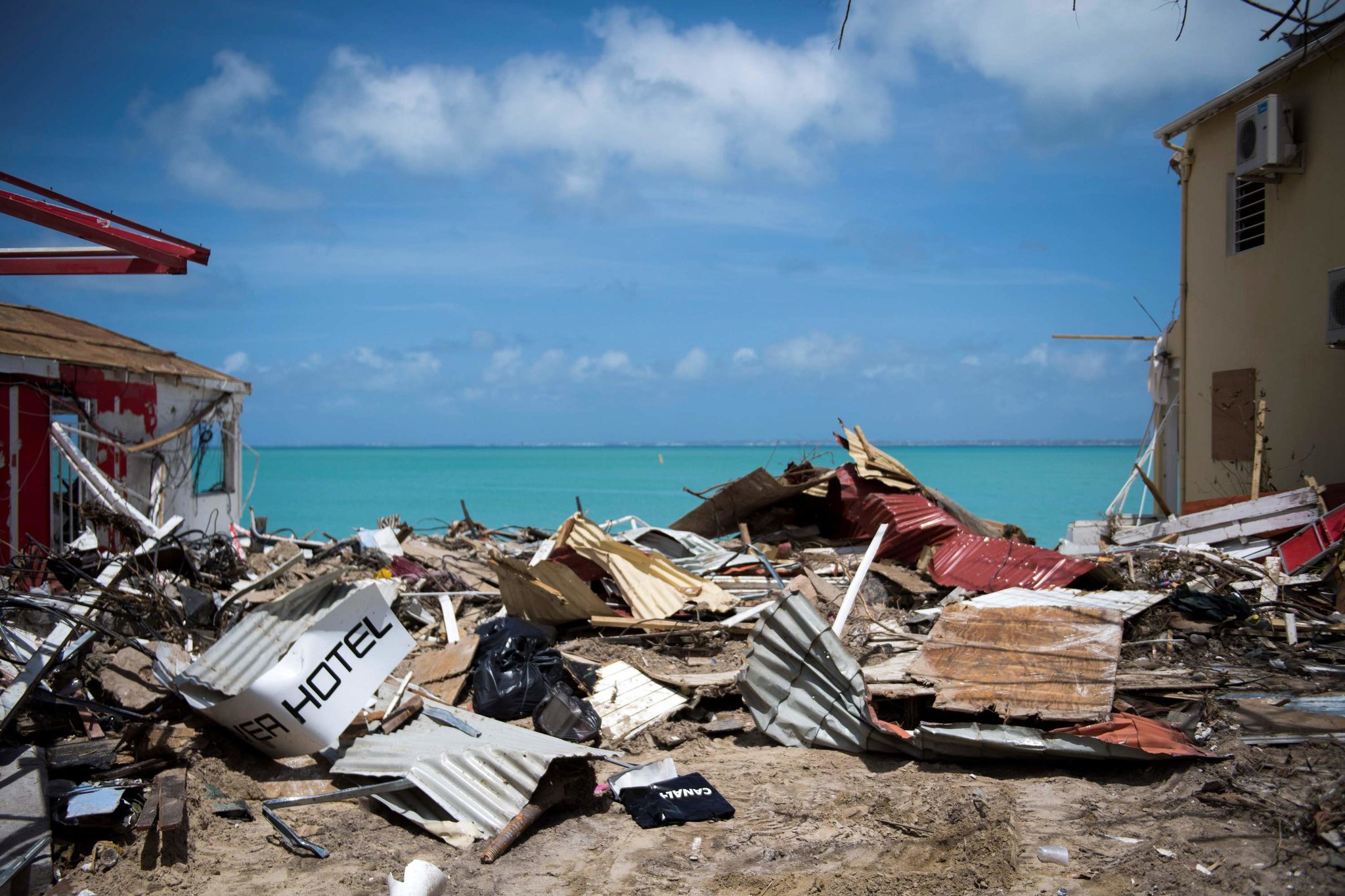 Well beyond the urgent needs — distributing water and food to those without, restoring power and communications, repairing roofs and addressing the trauma inflicted by the storm — a faint possibility for the island’s rebirth is emerging.

For many, though, the future is confined to making it through the day.

“We have the chance to start back from zero,” said Daniel Gibbs, president of the local government on the French side of St. Martin. “It’s going to be tough for my population. They are suffering. But today we have the chance not to rebuild, but to build.”

The island — split between a French and a Dutch side, with a population of 75,000 over 34 square miles — has only just begun to take stock of its losses. The government on the French side has reported an official death toll of 11, but an assessment of the full extent of the islandwide destruction may be weeks or months away. 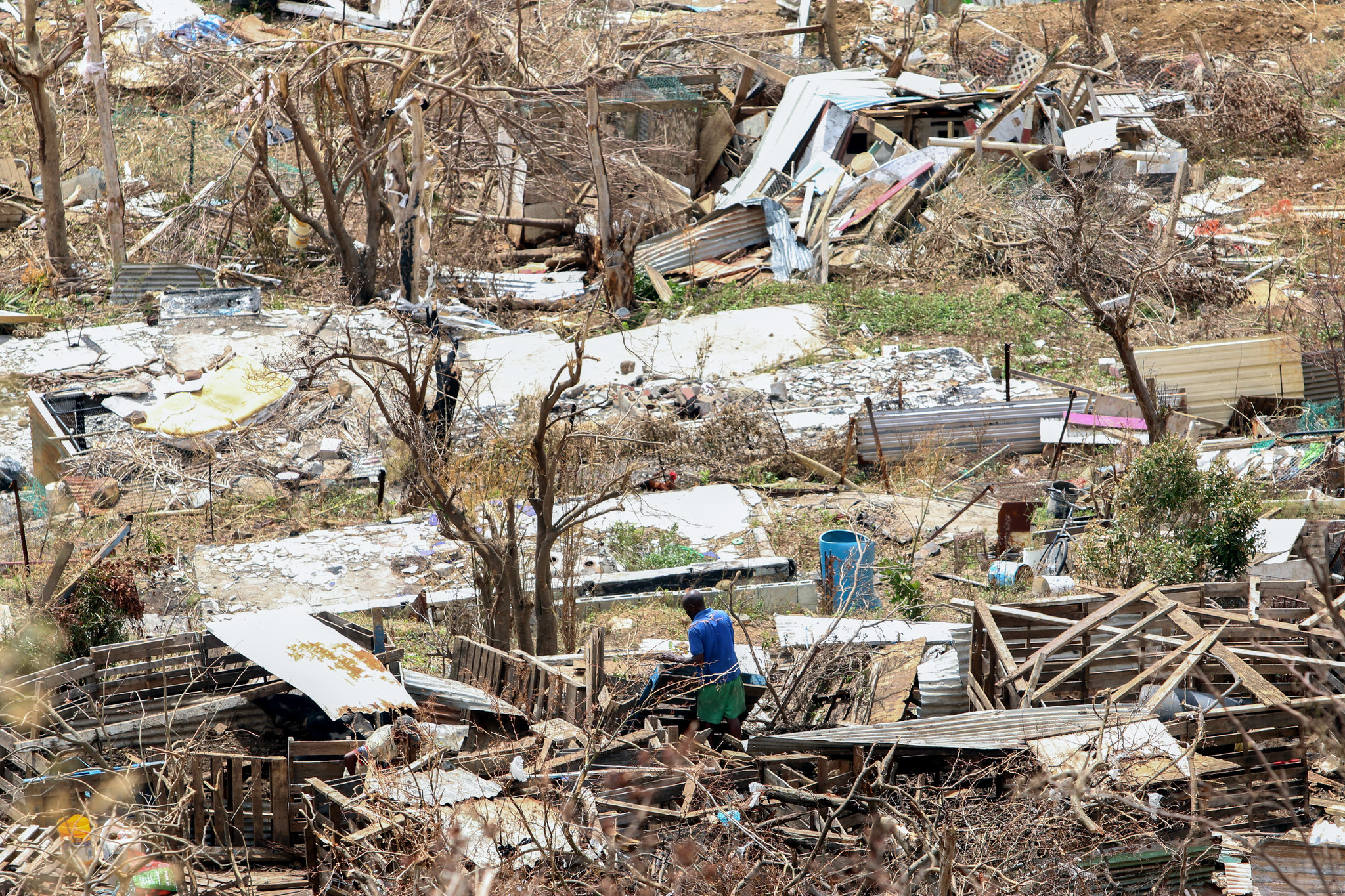 A man examining the remnants of his home on the Dutch side of the island.

To many residents, including some doctors working in the emergency room on the French side, the death toll seems much too low. It is widely seen as unfathomable that so many people could have survived the harrowing Category 5 winds, which tore through the eastern Caribbean at speeds of up to 185 miles an hour. Some officials suggest that hundreds may have died in the storm.

“I have no idea how high the death toll will go, but I don’t think it will be in the hundreds,” said Mr. Gibbs, adding that the number of bodies recovered and people reported missing is small for now. “This thing was just so big, I think people believe the death toll has to be higher.”

Whatever new form the island takes, tourism will remain the heart of its economy. How long that will take is anyone’s guess. The storm did not differentiate between the island’s stark socioeconomic differences. Poor areas flooded and suffered the same as the high-cost, pastel-colored communities of Orient Bay.

Along the coastline of Marigot, the nerve center of the economy on the French side, the storm toppled restaurants, shops, banks and open-air markets, leaving them desolate, practically abandoned in the midday heat. 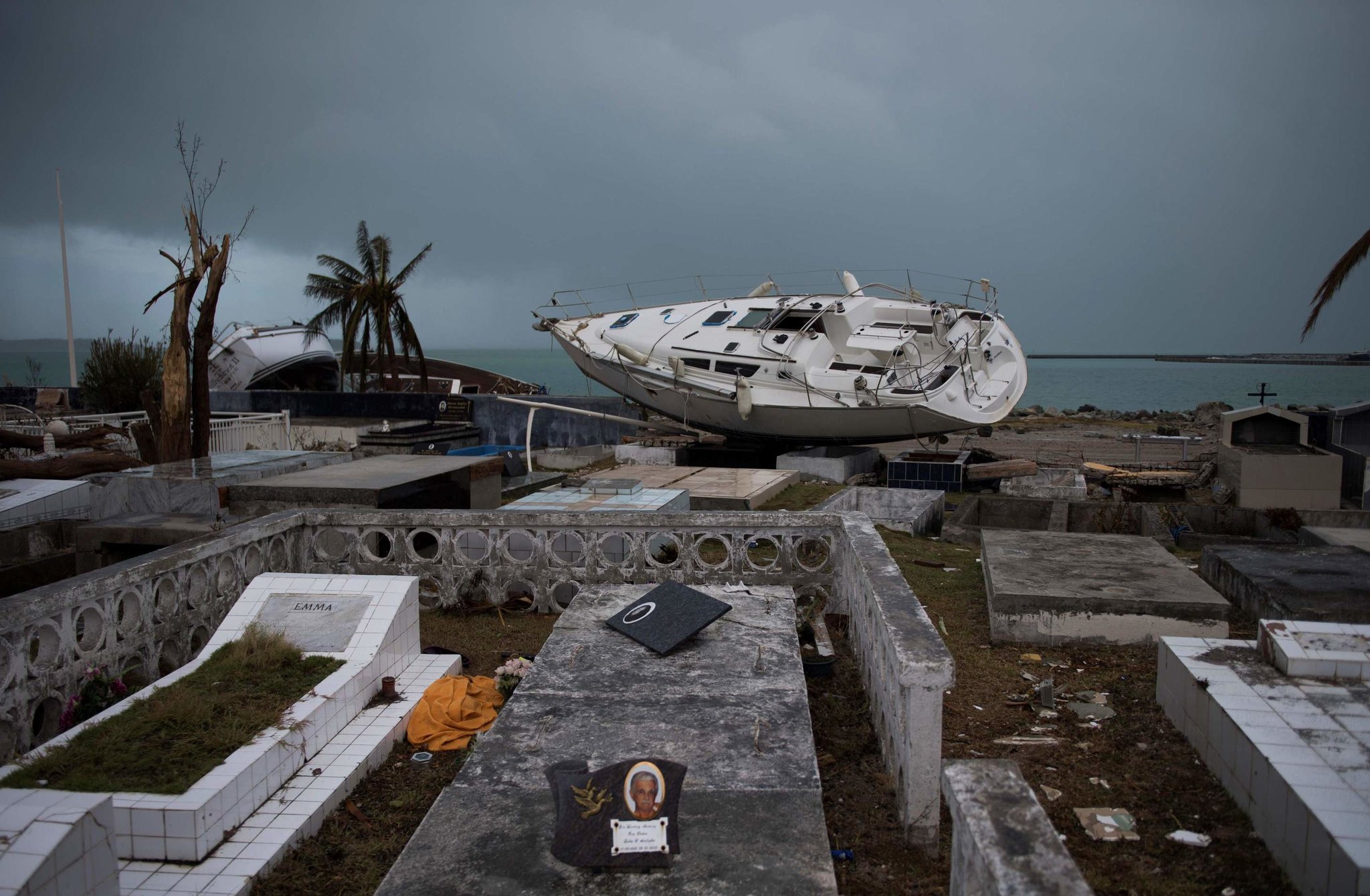 A sail boat beached last week in the cemetery of Marigot, on St. Martin.

Rémy Thibaud sat on his battered patio in the shade of the only palm tree left standing, yelling into the phone. Around him were the splintered remnants of his restaurant and bakery. The sea, an inviting cerulean once again, offered a cruel contrast to the chaotic mess where he sat, alone and facing economic ruin.

A creditor had called, checking on his next payment for the baking equipment he’d bought two years earlier. What baking equipment, he wanted to know? The oven was filled with seawater when he came to check on his restaurant after the storm.

“Vulture,” said Mr. Thibaud, 48, adjusting the motorcycle gloves he was wearing to clear debris. His insurance, he discovered, would not cover anything on the terrace, which was pretty much the entire restaurant. But he would stay, he had decided, and rebuild what he lost.

Many others are leaving. Two of his waiters had already fled. Others, too, have made the difficult choice to abandon their homes, at least temporarily. 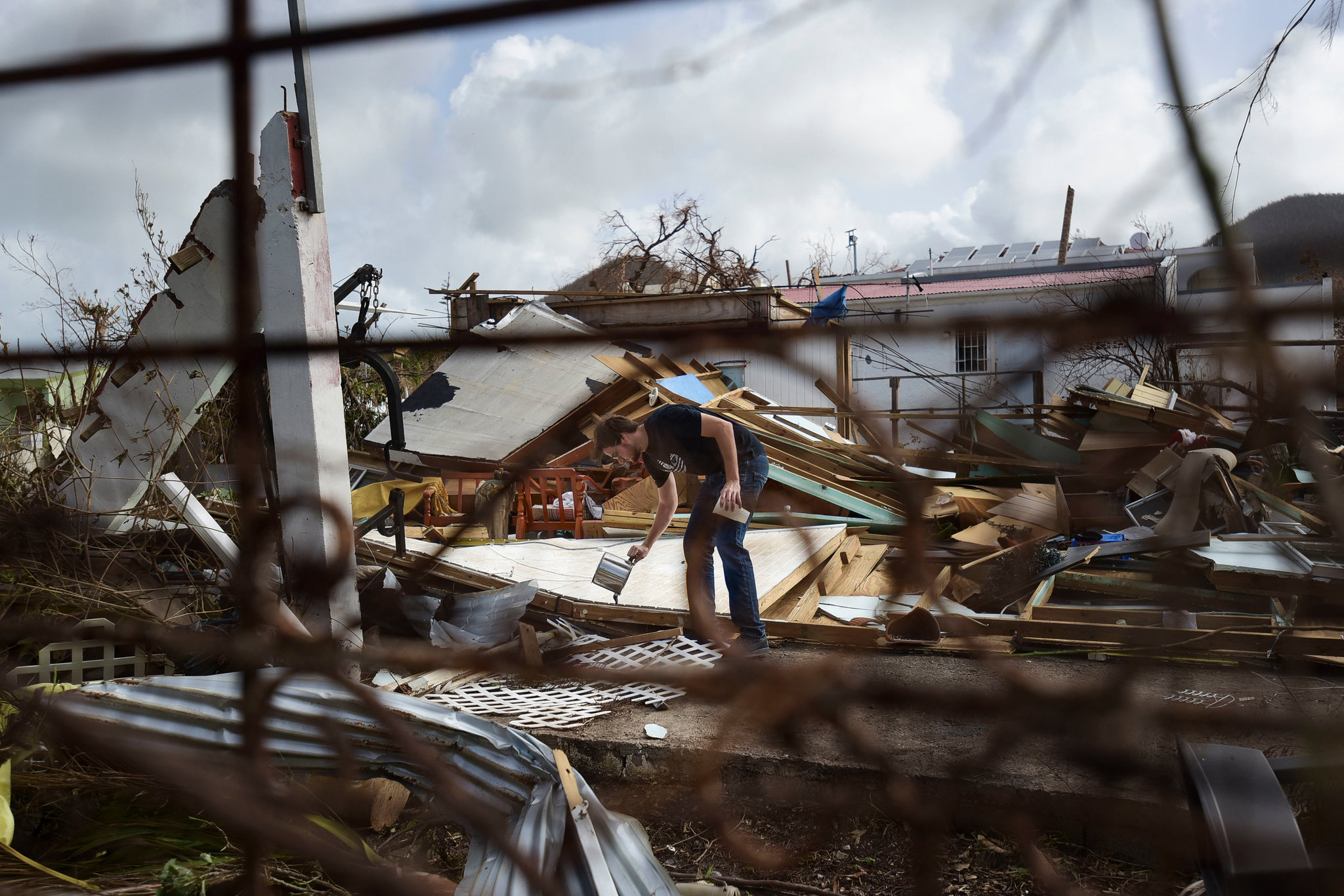 Lex Kools left food and water for his neighbors’ dogs in the island’s Cole Bay community on Tuesday.

Christiane Carvigant sat near the makeshift government offices with her three children, ages 17, 16 and 9, as they prepared to evacuate. The children cannot afford to miss school, she said, especially Emeline, a high school senior who is meant to graduate this year. Her two girls and little boy will stay with family on the French island of Guadeloupe, a little less than an hour away by plane.

The family had survived the hurricane in the bathroom of their home, huddled in the tiny space for four hours as the wind howled and tore at the roof. Ms. Carvigant would rebuild as her children studied. Who knew when they could come back?

A bus came past to collect the children for their flight. Ms. Carvigant began to cry.

“It will be a long time before we can live normally again,” she said, “but at least we have our lives.”

Ludmen Vincia, a Haitian woman whose children were born in St. Martin, is trapped. Her son, Michael, has special learning needs, and their social worker says he must leave the island to continue studying. But her residency permit expired two years ago, meaning that she cannot leave the island on one of the flights chartered for evacuees. And she cannot send the boy alone — there is no family in Guadeloupe to care for him, and she does not have the money to place him with one.

The island’s physical scars — hillsides robbed of their lush greenery, disemboweled homes stacked on the roadside — are a constant reminder of all that has been lost, and the unrecognizable transformation the island endured in just a few hours of Irma’s fury.

But the smashed storefronts from robberies that occurred in the aftermath of the storm have created a different kind of crisis.

The lawlessness that prevailed in the first days after the storms — when some people moved from scavenging food for survival to pillaging appliances, jewelry and cellphones — shattered the image many residents had of their island. 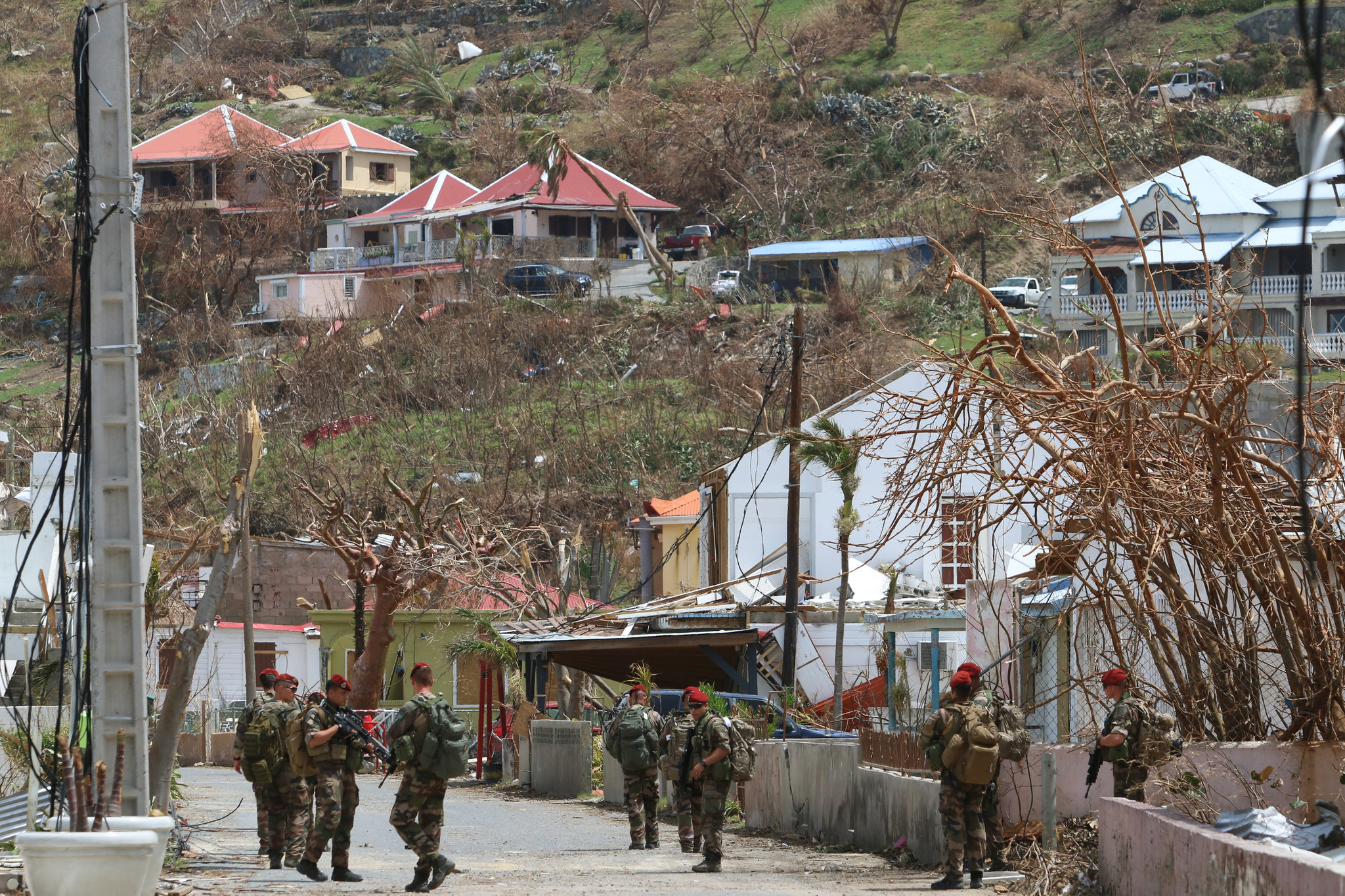 “I’m so angry for what those people did to this country,” said Rosette Francillette, a 55-year-old resident of the lower-income neighborhood of Sandy Grounds, clutching her granddaughter in her arms. “I understand stealing groceries, but these wicked people destroyed everything that wasn’t already destroyed.”

The beauty store where she works, called Lipstick, was ransacked, she said, leaving her jobless.

“I love my country, but I hate that people did this,” she said.

Still, having peered over the precipice of natural catastrophe and social disorder, others have found reasons to be hopeful.

At a storm shelter in the neighborhood of Concordia, a motley crew assembled in the emptied classrooms of a converted elementary school. A Dominican mother quietly bathed her children over a drain in the playground, while homeless men reeking of rum stumbled around the hallways and the windswept parking lot.

Alvin Carrasco squatted beneath a tree, manning a grill fashioned from a metal tray and fueled by the branches and detritus left from the storm. Meat donated by a store owner near to where Mr. Carrasco has been cleaning the streets sat atop the metal grating, lightly sizzling.

“This is the best time to stay,” he said. “I was here before the storm, suffering, not getting any work.”

With the cleanup and construction in the months and years to come, he might rebuild his life, too.

“This is my chance to start all over,” he said. 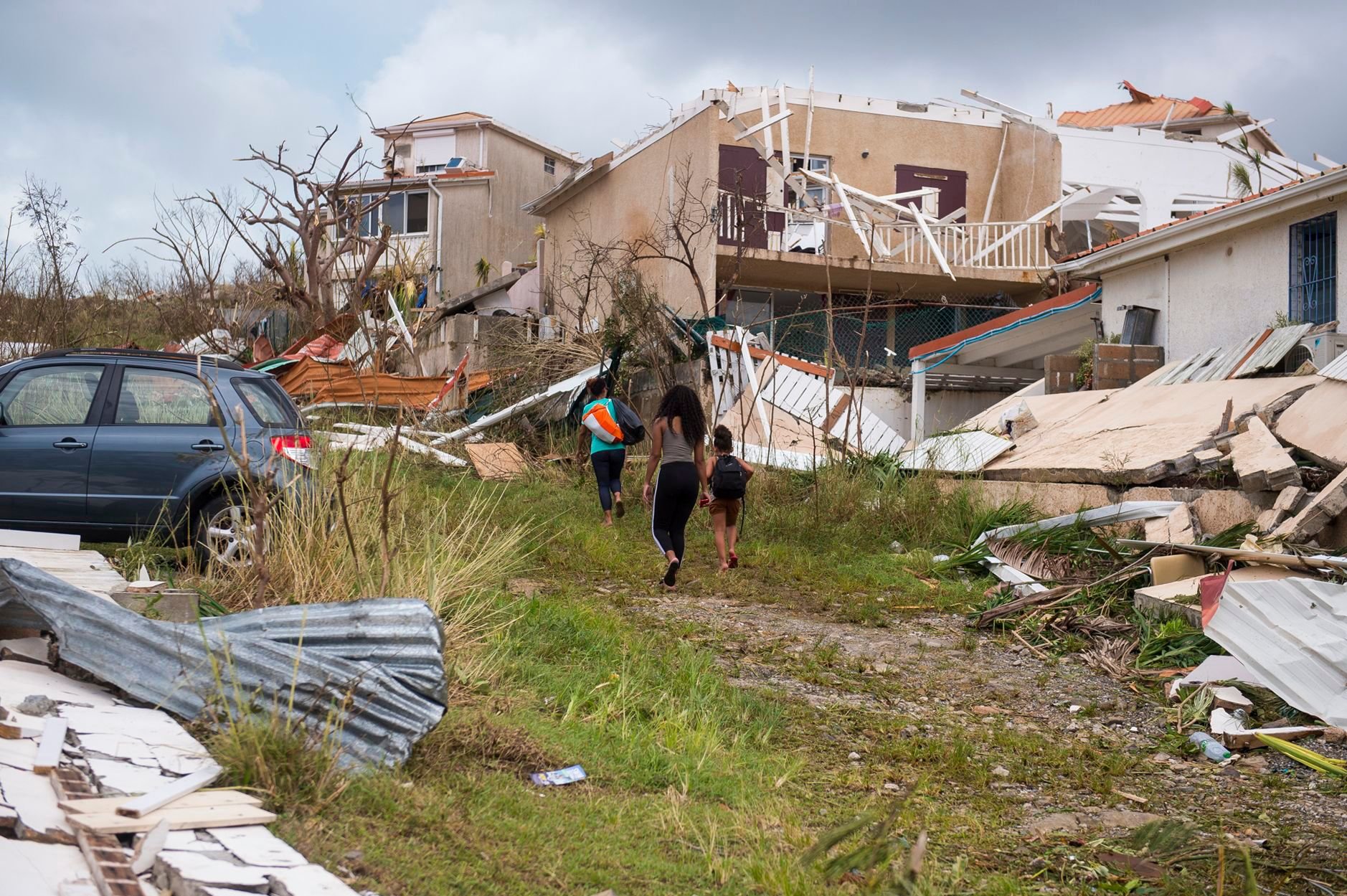 The heavily damaged neighborhood of Concordia.

Comment by CHIQUITA on September 19, 2017 at 1:45pm
I'm praying for all the islands and the inhabitants!

Comment by Mr. Johnson on September 16, 2017 at 12:42am
My heart goes out to the people of St. Martaan. I was just there a couple of weeks ago on a cruise. Shout out to my tour guide Sunny Liston Tours. God's speed.