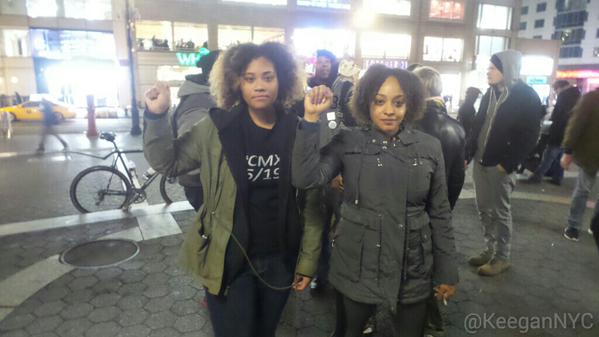 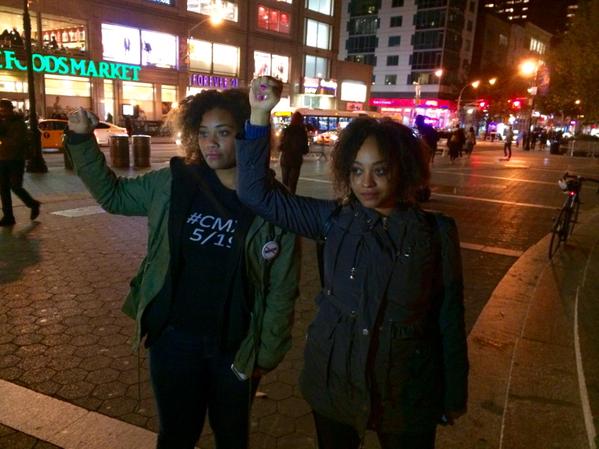 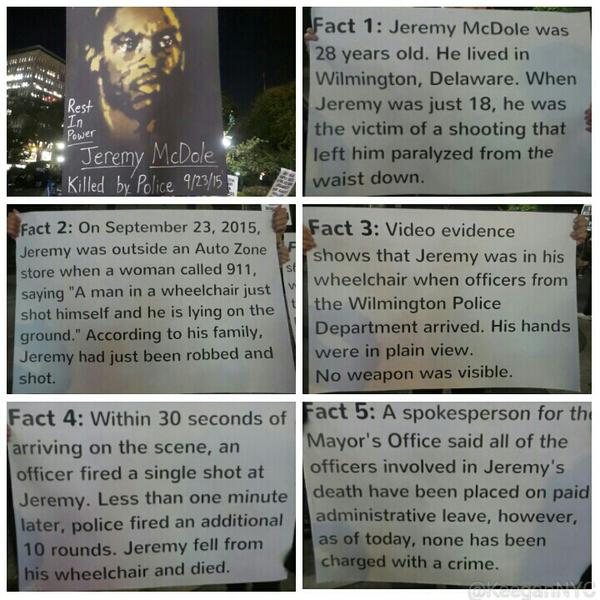 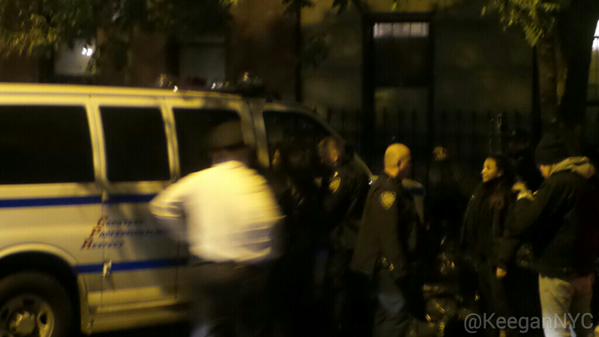 Two Black Lives Matter protesters from the activist group NYC Shut It Down were arrested outside of the 13th Precinct on Monday night, only to be shuttled out of the back door of the precinct house, and driven by squad car to the 5th Precinct in Chinatown. There, they were issued summonses for disorderly conduct and obstructing traffic, and released after a 90-minute detainment.

"We were in the street, I'm not going to tell you that we weren't," Kim Ortiz, one of the protesters who was arrested, told us this morning. "But we weren't blocking traffic. No cars were turning on that block."

According to protesters, 13th Precinct officers closed off East 21st Street between 1st and 2nd Avenues for the duration of the protest outside of their headquarters last night, making literal obstruction of traffic impossible.

Ortiz and her friend and co-organizer Arminta Jeffryes are among a group of about 30 Black Lives Matter protesters who participate in weekly 'People's Monday' rallies in New York City.

An extension of the larger protests last winter, these rallies highlight a different victim of police brutality each week. Last night's subject was Jeremy McDole, a disabled Delaware man who wasfatally shot by Wilmington police last month while in his wheelchair.

"We've been doing this for so long, they know that if we stop in front of the precinct, all you have to do is let us be for 5 minutes and we'll be gone," Ortiz told us. "We keep it moving."

Ortiz said that she, Jeffryes, and their fellow protesters gathered at Union Square around 7:30 last night, and used 'mic-check' call-and-response to tell McDole's story. They then continued to the 13th Precinct at 230 East 21st Street.

After a second mic-check, Ortiz recalled, the entire group began walking away from the precinct. Ultimately, they planned to conclude the rally at Grand Central. "I'm turning to walk on the sidewalk, and the white shirt grabbed me, and then he grabbed my comrade [Jeffryes], and they just arrested us," Ortiz recalled. "There was no dispersal warning."

"I was leading chants, so I think that's definitely why they targeted me," she added. "We believe it was a tactic to get two loud, strong people in jail so they could possibly shut down the protest."

According to Ortiz, she and Jeffryes were then taken through the 13th Precinct to a squad car parked in the back.

"The officer literally said they [the NYPD] were trying to make it hard for us to rejoin the march," she said. "I hear the officer on the phone say, 'Okay we're going to the 10th, no, we're going to the 1st,' and then they ended up taking us to the 5th. They were playing musical precincts with us."

"I heard from a number of protesters [last night]," Ortiz's attorney William Aronin told us this morning. "People kept calling me saying, 'Oh I think she's in the 1st Precinct,' 'I think she's in the 10th Precinct.' And it was only through my pretty aggressive demands that I was able to confirm exactly where she was."

"The official line that the police gave is that, 'Well we want to remove the perp from the crime scene,'" Aronin added. "But to me what it really seems like, is that they want to keep some confusion in the protest movement itself."

Ortiz and Jeffryes were issued summonses at the 5th Precinct, and released before 10:00 p.m. They were able to meet up with their fellow protesters for the duration of the rally.

"It [the arrest] is surprising because our group is super peaceful and [the officers] know us," Ortiz said. "But it's not that surprising. Usually they try to push us on the sidewalk, we resist, and they leave us alone. Sometimes you get a precinct that does not have that attitude."

Ortiz said that larger-scale protests tend to result in more arrests. At least two protesters were arrested during a Brooklyn march for Michael Brown in August, and a dozen more were arrested on 34th Street in July, during a solidarity march for Sandra Bland, a 28-year-old black woman who died in a Texas jail that month after being arrested during a traffic stop. At least 20 protesters were arrested in Manhattan during a sit-in on 34th Street on the anniversary of Eric Garner's death, and aWest Harlem march in June to honor nine people murdered in the mass shooting in a South Carolina church month prompted several arrests and a hospitalization.

"You're talking about disorderly conduct, which is a violation, not a crime," Aronin said, of the summons issued to his client. "It's amazing how many of these protests—that are about bringing attention to police abuse and police overreach—are ending with police officers arresting protesters for things that are so minor."

Ortiz and Jeffryes are scheduled to appear in court on December 10th. The NYPD did not immediately respond to a request for comment.

People need to flood the courtroom to support them,