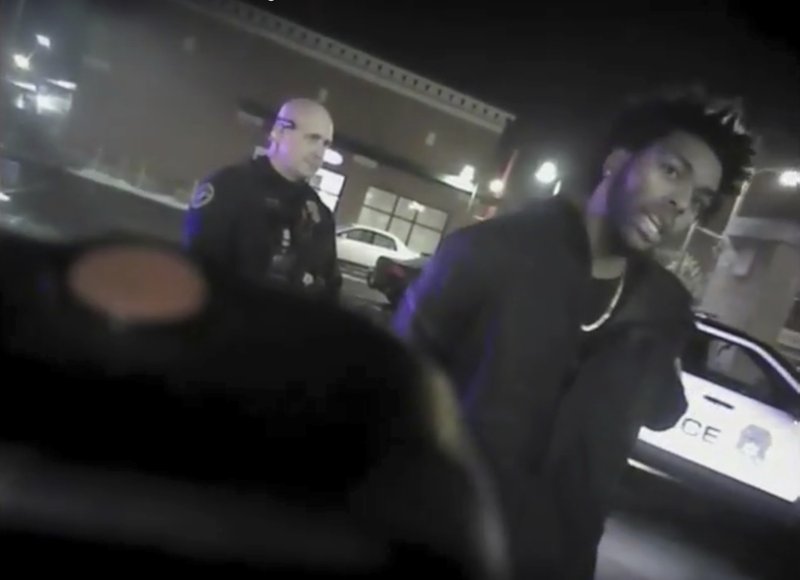 The Milwaukee Police Department released body camera footage on Wednesday of the January arrest — and tasing — of Milwaukee Bucks player Sterling Brown at a Walgreens.
The incident sparked outrage at the time. But the video reveals that Brown, who’s black, seemed to pose no threat to the officers, yet multiple cops were deployed to the scene and used a Taser on him, during an arrest that began with a dispute over a parking violation.

The video begins with an officer standing by Brown’s car, preparing to write a ticket because the vehicle was parked across two handicap spaces. Brown then arrived and argued with the officer, but ultimately they came to a standstill when the cop said that he needed to wait for backup. Within minutes, multiple police cars arrived at the scene. Several cops — at least six at one point — surrounded Brown, and he talked with them.

Brown had his hands in his pocket for much of the conversation, which officers did not seem to mind at first. But after a while, an officer ordered him to take his hands out. Suddenly, and with no sign of aggression by Brown, the cops got extremely aggressive, grabbed Brown, and pushed him to the ground. As Brown was on the ground, an officer yelled, “Taser, Taser, Taser!” The officer then used a stun gun on Brown.

At no point did Brown appear to pose a threat to the officers, based on the video.
Brown was initially arrested for resisting or obstructing an officer, but he was not charged with any crime after review of the body camera footage. The officers involved in the arrest were disciplined, Milwaukee Police Chief Alfonso Morales said in a statement.

“My experience in January with the Milwaukee Police Department was wrong and shouldn’t happen to anyone,” Brown said in his own statement. “What should have been a simple parking ticket turned into an attempt at police intimidation, followed by unlawful use of physical force, including being handcuffed and tased, and then unlawfully booked.”

The Milwaukee Journal Sentinel found that “although the Milwaukee Police Department’s use of firearms has dramatically declined in recent years, there has been a rise in the use of Tasers” — suggesting some sort of substitution effect. Stun guns were originally marketed as nonlethal, but they were relabeled “less lethal” after their use resulted in deaths in some cases.

Milwaukee has a long history of struggles with police and racism. A 2013 ranking, for example, deemed Milwaukee the most racially segregated metropolitan area in America. In 2016, riots broke out in the city after a police officer shot and killed 23-year-old Sylville Smith — leading City Alder Khalif Rainey at the time to remark that the city’s struggles with racism had led to a “powder keg.”

The escalation of the arrest once again puts a spotlight on police use of force in America, particularly against black Americans. There are vast racial disparities in how police use force. These kinds of incidents, in which a dispute over a parking ticket can escalate into a violent arrest, are a major reason that police have lost so much trust and legitimacy within the black community.

The racial disparities in police use of force

Comment by Jovis Charles on May 28, 2018 at 9:51am
Fractal tension was already bad but things got really really bad in 2016 after the general election. We are experiencing really horrific police abusing black men, women and children. My advice to Black people.
WAKE TO F*** UP.

Just sue those pigs. They could give him a ticket and move on but no had to  throw him down to the floor .JUST SUE!

Comment by Marcia on May 25, 2018 at 11:11am
I get so pissed when I see these incidents. Cant understand why he couldn't just give him a ticket and move on. You have white people killing off people in abundance and never they get this type of treatment, such bull s***.

Comment by E Peters on May 25, 2018 at 8:29am
Maybe just maybe some of the bad officers will just do their job the correct way. Let them see how being pursued legally in court constantly makes them feel.

Comment by E Peters on May 25, 2018 at 8:28am
He should have been issued a parking ticket or told to move his car. The fact that they surrounded him suggests they were going to incite an incident. You also here the cop say “ He doesn’t have any warrants or tickets anything”. The officer assumed he was a criminal. He should sue the department and then each officer personally until they cannot afford the legal cost for participating in an intentional act of intimidation. Financially break the officer that caused this problem.

Comment by Mr. Johnson on May 25, 2018 at 2:47am
Sue the dam bastards and recommend that the one that taser you be fired! For a parking ticket? Dam racist cops.

Comment by Marlon Augustine on May 24, 2018 at 7:26pm
Real mess up vibes but if he just park his ride the way he supposed to park all this would not have happened. Just saying

Yet another episode of being a black man in America....smh.

When??   Just when are we going to say enough is enough and unite ourselves under one common objective: STAYING ALIVE

I can think of many, many, more worthwhile reasons why it is beneficial for us to unite and end the bs, but at least let's do it to stay alive for when popo stops you they don't see NBA/NFL star, Jamaican, African, Bajan, Trini, African-American, Honduranian, Panamanian, etc, etc, etc.  The only thing the popo sees is BLACK.

So tell me, what the hell is wrong with us?  Why do we see so many differences before we see our one commonality: WE ARE ALL BLACK FIRST BEFORE WE ARE ANYTHING ELSE !!!!