Mike Tyson Talks To Matt Lauer About Battling Addiction "When I Start Drinking & I Relapse, I Think Of Dying" [Video] 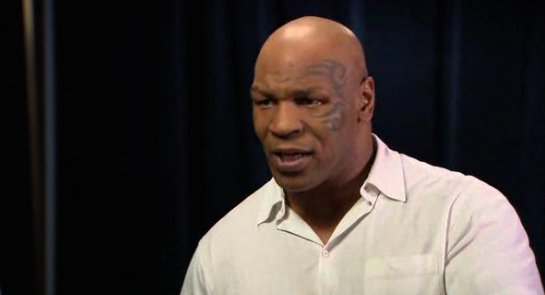 Mike Tyson has been very open about the fact that he's battled drug and alcohol addiction in the past. After four and a half years of being sober he went out for a night of drinking. The guilt of relapsing has the former boxing champion questioning things in his life.

While promoting a boxing event at the Turning Stone Resort in Verona , N.Y, on Friday (August 23), Tyson made a startling revelation

“I'm on the verge of dying because I'm a vicious alcoholic," Tyson said at the press conference. "I've been lying to everybody else that thinks I was sober, but I'm not." During an interview with Matt Lauer that aired this morning on The Today Show, Tyson went into more detail about his current problems.

"I hadn't took a drink for four and a half years and I just started chugging them, " Tyson said. "And I don't know why I started feeling guilty because I really don't care about that situation. Because it's a personal situation. I just didn't feel good talking to these people knowing that I took those shots the other day."

Tyson added that the pressure of doing a sports documentary and boxing promotion started to weigh on him. And a visit to his old Brownsville, New York neighborhood brought back a lot of bad memories.

"When I start drinking and I relapse I think of dying," Mike continued. "When I'm in a real dark mood, I think of dying. And I don't want to be around no more. It's really difficult to discuss. I'm not experienced enough in my recovery to really pinpoint it. It's a really dark moment at that time. It's not like I'm going to shoot myself today. But when I start drinking I'm not the same guy." For most people success brings them comfort. With Mike it's very different. He feels anxiety because he's not sure what people expect from him.

"I don't know why, but it's that way. What is it that people are expecting from me because I'm successful? They may have helped me become successful. What is it they expect from me. I always feel like it's something in return," Mike explained. "I just like entertaining. I don't understand why I have to walk this straight line. I'm just a human being living life on life's terms and sometimes I don't do it that well. I can fight and entertain people, but I don't live life well. That's just something I don't do well."

Mike admits that he needs outside assistance to continue on the right path.

"I need help. It's not going to be easy. It didn't happen overnight. It is kind of strange and scary," Mike said of the thoughts he has sometimes. "I was born that way. Living a straight life is hard. Smoking a joint and having a drink, I'm cool. It's tough being sober. I've been sober 12 days. I'm mean and irritable. I don't know if I like this sober guy. I won't survive if I don't get help."

Mike it is hard !!! When the world feels to heavy to lift but ya have to keep punching me brother !!! You fought this far please don't give up now!!! But some say talking about it is better then holding it in !!! Blessed!!! But to the world I don't know but to each his or her own!!