Mike Tyson and Roy Jones Jr. were billed as the main attraction in their highly-anticipated, past-their-primes exhibition fight Saturday night, it was Snoop Dogg who emerged as the undisputed champion after the bout, with social media giving his hilarious commentary the belt.

“This s–t is like two of my uncles fighting at the barbecue.” was one of his more popular themes of the night.

He also added color to the far more entertaining Jake Paul/Nate Robinson undercard. When Paul knocked Robinson to the ground, Snoop said, “Oh, my God, Lord have mercy! Oh, Jesus!,” then began singing “Precious Lord” as Robinson stumbled around the ring, trying to regain his composure.

Watch the Jones/Tyson fight and highlights of the Robinson knockout with Snoop’s commentary below, followed by reaction on social media: 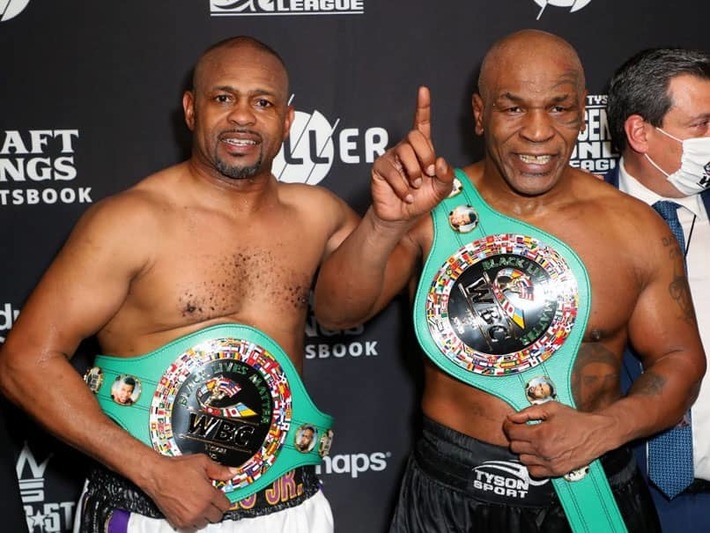 Well, it’s Sunday morning and if you’re waking up with the Tyson-Jones fight on your mind, you’re wondering who won, right? The answer is … it was unofficially ruled a draw.

The Mike Tyson/Roy Jones Jr. heavyweight exhibition fight surprised a lot of fans and went the full 8 rounds at Staples Center in Los Angeles. Afterward, Tyson, who last fought in 2005, said he would “absolutely” do another exhibition.

Admittedly, both fighters, in their 50s, looked pretty good, but ultimately Tyson, 54, overwhelmed Jones, 51, with heavy hits, breaking down Jones after the fourth round. Tyson outlanded Jones 67-37, according to CompuBox.

Tyson also had a 57-28 advantage in power punches, including 35 to the body. After the bout, Jones admitted that Tyson’s body shots “took a toll” on him.

“I like him, but the dude is so strong man,” Jones said afterward. “I understand why they say some things are ‘bucket list’ because when he hits you, if it’s his head, his punches, his body shots, it don’t matter. Everything hurts. So, for me I thought I did enough boxing on the outside to edge it out, but I’m cool with the draw. It means we just might have to do it again, but I don’t know.”

Roy Jones Jr., left, throws a punch at Mike Tyson during their exhibition fight at Staples Center on Saturday. The fight ended in a draw. (Joe Scarnici / Getty Images)

As we said up top, the fight was an 8-rounder and each of those lasted two minutes. Additionally, each fighter wore 12-ounce gloves and no headgear. The WBC also created a “Frontline Battle belt,” which was awarded to both fighters.

“I thought it was dope. I’m a little upset that they made it a draw, but they gave it their all,” said YouTuber Jake Paul, who scored a brutal second-round knockout over former NBA guard Nate Robinson on the undercard. “And, they both looked good. Mike came out swinging. Mike won. Let’s give Mike the W.”

Oh yeah, speaking of 23-year-old Paul’s fight with Robinson, check out the YouTuber’s devastating knockout of the 36-year-old ex-NBAer:

Getting back to Tyson and Jones, after the fight, both men appeared healthy, thank goodness. Tyson said he is not doing any other fighting … unless it’s an exhibition. He has also pledged to give his purse to charity.

“This is better than fighting for championships,” Tyson said of the fight. “We’re humanitarians now. We can do something good for the world. We’ve got to do this again.”

The man they call “Iron Mike” is more fragile than you might think. Or at least he wants you to think that. It’s been 15 years since his last fight. He said he wanted to get back in the ring again but he was scared of getting injured because it had been such a long layoff.

“I’m afraid I might get hurt. Why nobody care about my ass?” Tyson said to Jim Gray in a postfight interview. “I haven’t fought in 15 years. [Jones] stopped fighting two years ago, and everybody’s worried about his ass.”