Mid-hair collision! Plane passenger sparks fury after draping her long hair over the back of her seat, to the disgust of passengers behind her 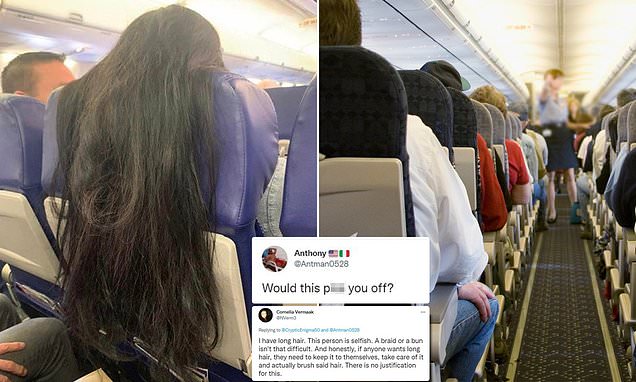 Twitter users reacted with disgust at the site of an ‘inconsiderate’ woman who draped her long hair over the back of a fellow passenger’s plane seat.

The unnamed woman’s locks extended beyond the tray table and to the seatback pocket, resting not far from another traveler’s knee in a flight believed to have taken place in the United States.

A photo of the incident posted by Twitter’s @Antman0528 was shared by thousands of social media users last week, sparking a debate about airline etiquette.

Another long-locked traveler added that the situation could have been easily avoided.

''A braid or bun isn't that difficult,' she said. 'And honestly, if anyone wants long hair, they need to keep it to themselves, take care of it, and actually brush said here. There is no justification for this.'

A picture of a woman whose long hair monopolized most of another passenger's tray table area has drawn the ire of Twitter users, who called her behavior 'inconsiderate'

One woman called the passenger's actions 'selfish,' saying the hair should have been pulled up

Added @tantum_erg0: ‘I’m a terrible person and this is just an invitation for me to live out my character defects.’

Another user, @LorisBigStory, said the same thing happened to her on a return flight from Belize.

‘I put my elbow on it several times,’ she said. ‘Never fazed her. People are rude.’

Other users said they’d solve the problem by chopping off the woman’s hair, prompting one woman to note that some snippers are permitted in cabin.

Some Twitter users said they'd chop the woman's hair off, prompting one woman to note that it is possible to carry scissors onto an airplane

Others said they would take a more civilized approach by asking the flight crew to speak with the woman.

‘I used to be an air hostess - my advice is never deal with a passenger directly,’ @WorkPsychol said.

‘Call the cabin crew, get them to tell this person to remove their hair immediately. It’s gross and it’s unhygienic.’ 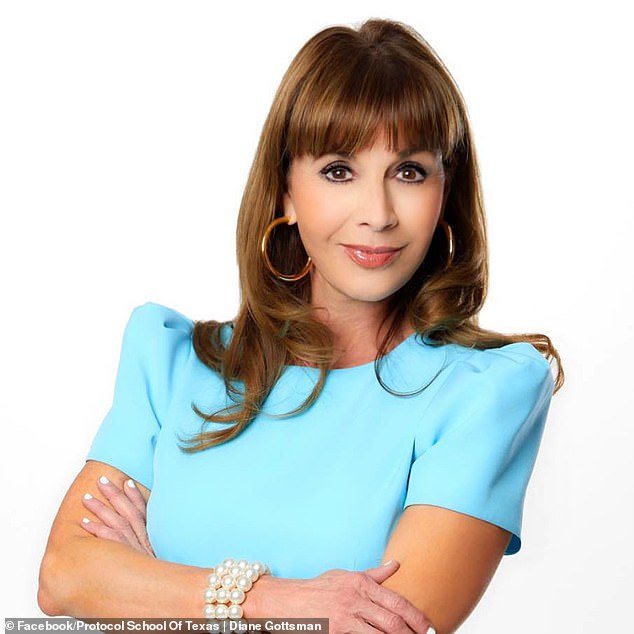 Etiquette expert Diane Gottsman agreed that the behavior was troubling.

‘While there could be things that would be worse, having someone’s hair strewn over the back of the chair gets close to your personal space,’ Gottsman told DailyMail.com. ‘Similar to getting a hair in your food. It just feels invasive, not hygienic and lacks common courtesy for the fellow passenger.’

She added: ‘It’s much like brushing your hair at the table. There are just basic rules of decorum to follow.’ 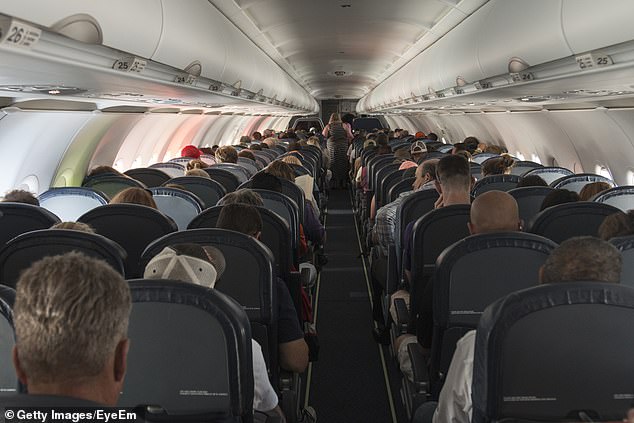 A survey found that of all the things that irk plane passenger (shown in a file photo), treating a flight attendant rudely was most annoying

Gottsman said there are a number of ways passengers could work to resolve the hair-over-the-seat dilemma.

'Depending on the circumstances... either bring it up to the flight attendant and allow them to handle it, or you can just say: “Excuse me, would you (kindly) move your hair away from the back of the seat?"'

She said passengers must always err on the side of caution and resist the urge to judge others.

A passenger might say, under Gottsman's advice: 'I’d appreciate you pulling your hair back because it’s in my space. I am unable to get my tray table and I would like to use it.'

Travel etiquette has long been a sore spot for air passengers opposed to reclining seats, seat kickers, armrest hogs, and those using electronic devices without headphones.

Masks have more recently joined the points of contention in the not-so-friendly skies. 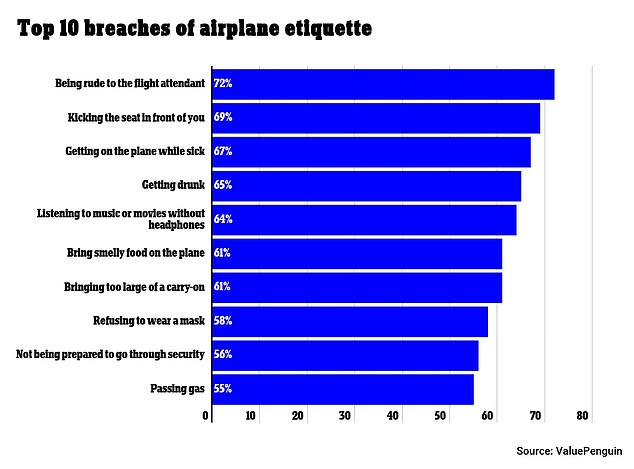 A recent survey found 54 percent of Americans believe the pandemic caused manners to worsen during flights.

About a quarter of passengers reported that they’ve been on trips where misbehaving passengers prompted a plane to turn around, according to the Value Penguin study.

Passengers reported that they were most irked in flight by others being rude to flight attendants, kicking seats, and traveling while sick.

Other pet peeves included getting drunk, listening to music without headphones, consuming smelly food, and holding up the security line.

Rules on how to wear your hair on board have largely flown under-the-radar – until now.

Really a long one.

I want to show you that a mistress like me is capable of taking care of a hot man like you. In the privacy I love the warm and caressed encounters, I would like you to explore my body tonight and feel alive.

I know how to give pleasure in many ways, after knowing me, it will be difficult to be satisfied with others. In privacy, I am warm, accommodating and very imaginative, all my services are very complete.

Couldn't be me. "Smacking gum"

Comment by vaughn mitchell on October 25, 2021 at 4:20pm
I would tell the flight attendant she have to move her hair from my seat, covering my chair,if she don't it will be cut. Disrespectful s***.

Reminds me of that hair ball from the 'Adams Family', I would have blew my nose and smeared it on her horse hair.