Michael Jordan’s still talking trash at 52, plays pick-up game in Bahamas with Tom Brady {VIDEO} Is MJ too OLD to be TRASH TALKING and does he still have it on the BasketBall court? 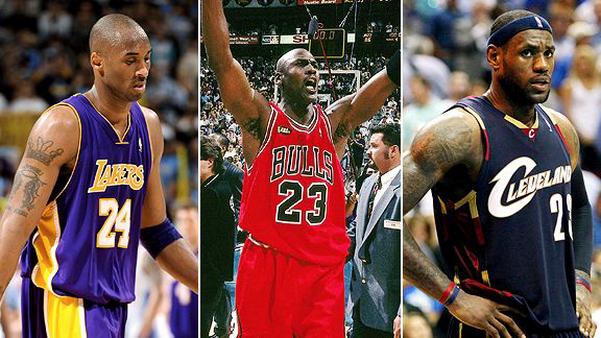 Michael Jordan is widely considered the best basketball player ever to lace up a pair of sneakers. His six championship rings with the Chicago Bulls is a testament to his incredible skills.

During the Michael Jordan Flight School camp in Santa Barbara on Saturday, August 8, MJ held a Q&A session with fans. He talked about a number of topics including LeBron James, Kobe Bryant his Chicago Bulls vs. Los Angeles Lakers, Hakeem Olajuwon, Larry Bird and much more. 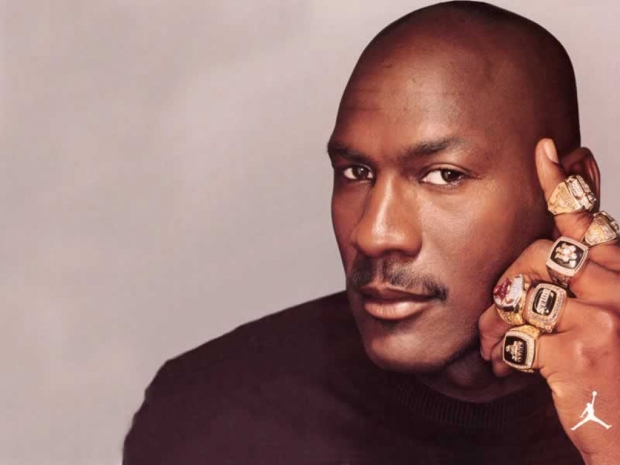 If I had to play one game, who would I want to coach: Phil Jackson or Dean Smith?

"Dean Smith. [Some audible gasps/murmurs.] Fortunately Dean Smith helped me become the basketball player I am today. Phil was lucky because I was taught the game by Dean Smith."

How did I feel when the Detroit Pistons walked off after we beat them in 1991 [in a 4-0 sweep in the Eastern Conference finals]?

"I felt fine. I felt accomplished. We beat them and they felt ashamed about us beating them. I felt like it was bad sportsmanship. I would not advise you guys to do that. You've got to be able to lose in grace and win in grace -- so don't walk off the court. Even though you hate losing, that's just bad sportsmanship if you do that."

Biggest trash-talker I ever played against?

What did I think about when Shaq said that the all-time five of the greatest Lakers could beat the Bulls' five greatest players?

"My best pick-up game I've ever played was the games and the practices with the [1992] Dream Team. ... My team was myself, Scottie Pippen, Patrick Ewing, Larry Bird and Chris Mullin. We played against Magic Johnson, Clyde Drexler, Charles Barkley, David Robinson -- that's five, right? -- and we killed 'em.

Note: That's not five; the other player team's fifth had to be either Karl Malone, John Stockton or Christian Laettner. There's also a chance Jordan is misremembering a bit, and he's talking about this scrimmage covered in-depth by Sports Illustrated, which featured a Jordan-Malone-Ewing-Pippen-Bird five against Magic, Barkley, Robinson, Mullin and Laettner (although a 40-36 final score in favor of Jordan's team hardly constitutes a "killing.")

"Right now, or when I was in my prime? Right now? Buddy, I couldn't beat -- well, I'd go against [Stephen] Curry because I'm a little bit bigger than him. So I could kind of back him in. But LeBron is a little bit too big."

If I had a chance to add another member to team Jordan, who would I hire?

"I'm a big fan of [Mike] Trout, the baseball player. I absolutely love him. I wish I could hire him. But he's Nike, so I can't steal Nike's guys." 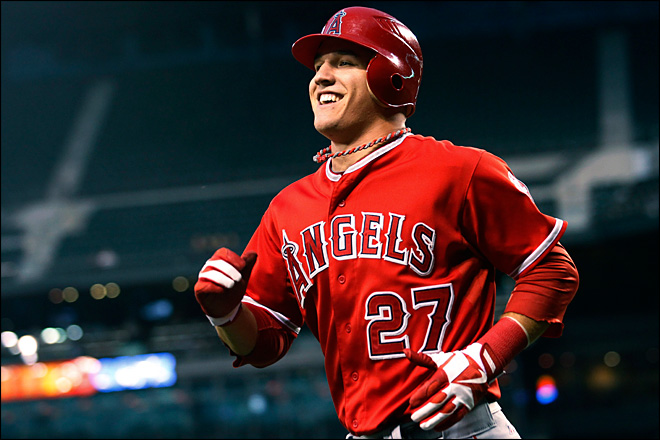 This is the ESPN question. I know it's going to be all over ESPN. [Note: He was right.]If I was in my prime, could I beat LeBron in a one-on-one game? 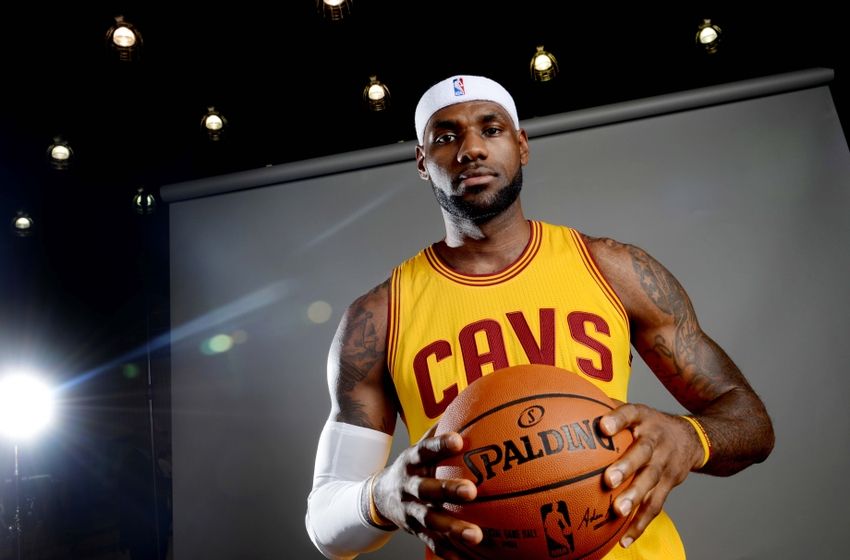 [Long pause in which the campers mutter/shout their opinions.]

What did I see in Kwame Brown when I drafted him [No. 1 overall for the Washington Wizards in 2001]?

"I, along with everybody that was in that draft room, wanted Kwame Brown because of his athleticism, his size, his speed. He was still a young talent, 18-year-old, 19-year-old kid."

If you went back and you couldn't play basketball or baseball, what sport would you play?

[Note: Don't think meteorology is a sport? Tell that to Jim Cantore!]

What kind of advice would I give Kobe Bryant?

[Uncomfortable laughter in the crowd.]

"Actually, Kobe and I are good friends. I like Kobe, we talk a lot, I hope he comes back healthy. I think he's one of the great players of the game, I think he's done a lot for the game, and he has a true love for the game of basketball. I absolutely have high regard for Kobe Bryant. "Even though he stole all my moves, but that's OK. I still love him like a brother."

Trash talk has no age limit.

The NBA’s all-time-all-time was in the Bahamas recently playing some pick-up with Patriots quarterback Tom Brady.

Golfers Luke Donald and Keegan Bradley were also on hand. An unidentified defender was trying to pressure Jordan at the top of the key.

So Jordan took him right, threw it between his legs to the left and then gave him the 52-year-old version of his patented stepback fadeaway.

Watch Jordan break down a defender, then deliver some trash talk below:

In case you didn’t hear everything, Jordan tells the guy:

Hey man, you don’t have YouTube? Man, you better put on Michael Jordan for real.

Tom Brady was happy to have MJ on his team. 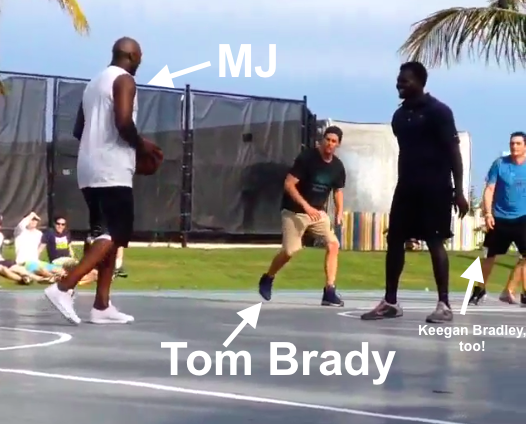 What you doubters FAIL to realize is that in his prime Jordan would have made the necessary adjustments to that L.A. Team. Now keep in mind,one of their main stars, Kobe, would have no blue print if Jordan's Bulls were pitted against them b/c they would have been in the league at the same time. So who would Kobe have patented himself after, Magic??? No disrespect, Magic is and was my guy back in the day. But his skill set was not of the caliber as Jordan's. And I was not a Jordan fan in the 90s. BUT I conceited to his greatness even with him and his crew dismantling NY's shot at a title in '94...bum ass Charles Smith. But I digress.Lol Jordan in his prime was unstoppable. #MONOLITHIC FACTS. And they say Lebron...Lebron who??? LMAO Kobe is without question heir to the throne. Facts, whether anyone wants to accept it or not. Kobe enshrines Jordan on the basketball court. I almost couldn't believe what my eyes saw from a post on facebook. Move for move, positioned on the floor at the same exact spots, Kobe displays a spot on rendition of Jordan. My question was and still remains, how come no one else in the league studied Jordan to the same degree???

Jordan knows they would have no chance to win.

@BIGMANN, Both you and Jordan are delusional. Besides Jordan, Pippen & Dennis Rodman who else could compete with all these hall of fame players? Worthy & Coop would slow Jordan down and reduce him to jump shots. Between Shaq, Chamberlain & Baylor, Chicago would get little rebound except for The worm could finesse a few. and between Kareem, Jerry west, Glen Rice, McAdoo, Jones, Horry, Wilkes & Kobe they'd be shooting in the high 60% from 18' out. Chicago has no one to handle Shaq & Chamberlain in the paint. It would be a massacre.

Some of us are still in shape, 50 and over and can still ball

Comment by E Peters on April 2, 2015 at 10:42am
Trash talking is part of sports by men. I say men because men can take it without wanting to fight. Today young boys want to fight over trash talking and hard fouls. That's why the NBA is so strict now. Because the league is full of young guys. You get a bunch of old guys playing a sport there will be plenty of trash talking. Back in the day if you got embarrassed on the court you would work in your game and come back to win. And the last thing you would do is cry or want to fight over the game. You would kicked off the court and called a baby man up then come back.