In an earlier EURweb report, we told you about Joe Jackson’s 25-year-old granddaughter, Yasmine Jackson, being the victim of a racially charged attack in Las Vegas.

Yasmine detailed the harrowing experience in an Instagram post, noting that the woman stabbed her seven times. She also included gruesome injury photos (see below)

“This woman chased me down and started stabbing me. She said it’s because I was a n—-r and that’s all I could hear while I was being stabbed. I can’t move my neck at all. I’m scared to be alone,” Yasmine captioned the images of her face and neck injuries.

Her assailant, 22-year-old Angela Bonnell, was initially charged with felony battery with a deadly weapon. The charges were later elevated to attempted murder.

Now, according to KSNV, Bonnell’s has also been slapped with a hate crime charge.

“I asked people to help me because she was stabbing me and nobody helped,” she wrote in a May 30 Instagram post. “Until someone did, actually a few people did & I am thankful for you. I pray to God that if you have any kind of hatred in your heart towards black people that you heal it. I didn’t deserve this, nobody does.”

Yasmine reached out to civil rights activist Shaun King, asking him for help when authorities were only charging the racist attacker with “felony battery with a deadly weapon.”

“I feel like she deserves attempted murder and also this is a HATE CRIME,” she continued. “SHE CALLED ME A N—-R & THERE ARE WITNESSES.”

In a follow-up post, Yasmine noted that charges had been upgraded to attempted murder.

Jasmine’s mother, Joh’Vonie Jackson, also shared the injury photos of her daughter, along with the caption:  “Look what this Woman did to my daughter @yasminejackson_ she tried to kill my daughter for being Black,” Joh’Vonie wrote. “My daughter has a good heart and has dedicated her time as a nurse to help others. She did not deserve this!” 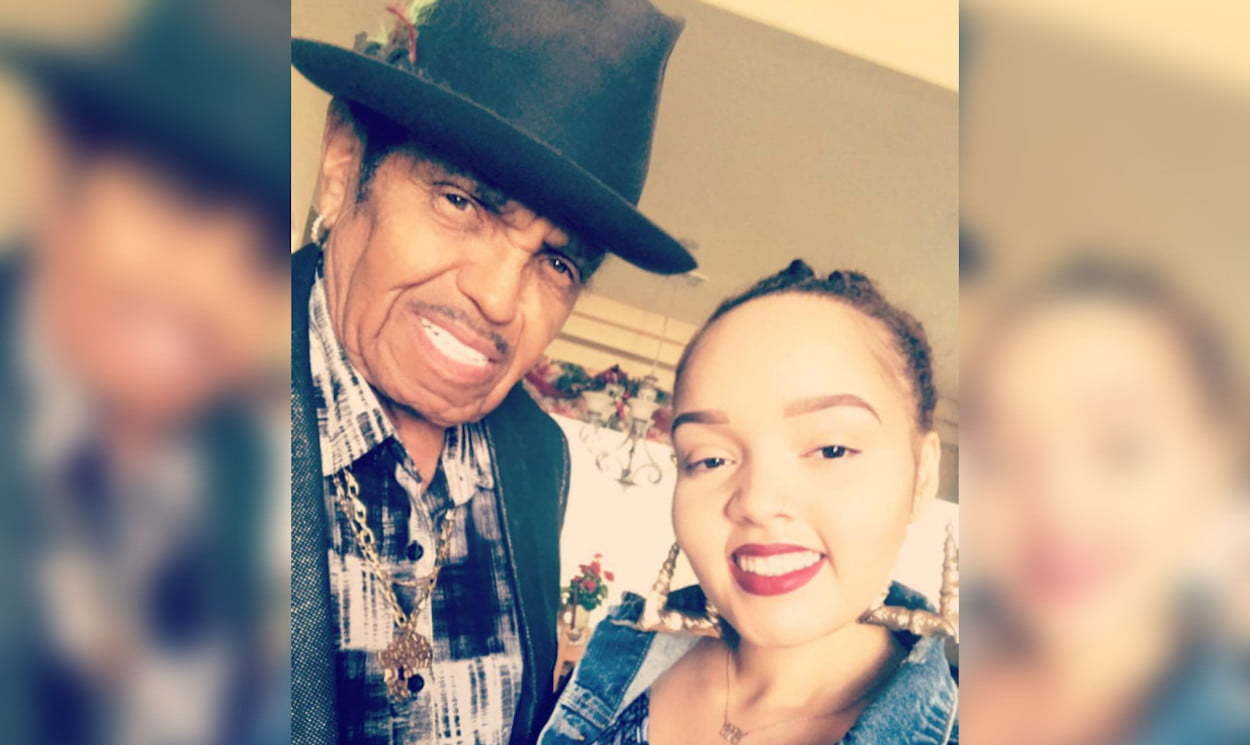 Michael Jackson's niece was the victim of a hate crime that left her seeking medical attention from stab wounds.

Joe Jackson’s 25-year-old granddaughter Yasmine was reportedly hunted and stabbed multiple times by a racist woman who was hurling racial slurs at her. According to Yasmine, who had to get several stitches at the hospital, the unidentified woman chased her with a knife and stabbed her seven times while yelling that she was a “ni**er” during the assault.

Yasmine shared a graphic look at her face after the stab wounds to social media, along with a detailed account of the incident and a plea for the public’s help to get the white attacker to incur appropriate charges. “I was stabbed 7 times right by my house because ‘I’m a ni–er,'” Yasmine wrote. “This woman chased me down and started stabbing me. She said it’s because I was a ni**er and that’s all I could hear while I was being stabbed. I can’t move my neck at all. I’m scared to be alone.”

Yasmine, who is a practicing nurse, also explained that people seemed reluctant to help her at first, but she was relieved when they finally did. “I asked people to help me because she was stabbing me and nobody helped. Until someone did, actually a few people did & I am thankful for you. I pray to God that if you have any kind of hatred in your heart towards black people that you heal it,” she said. “I didn’t deserve this, nobody does. Oh & btw I’m still f**king proud to be black.”

In light of the recent brutal murder of George Floyd, tensions among races are high, and everyone is amped up in the fight against racism and inequality. Yasmine asked her followers to help her get the justice she deserves following the white assaulter being booked on a meager charge of felony battery with a deadly weapon. Though it was quite clearly a hate crime based on the attacker yelling “Ni***er!” that seemed to have slipped under the mat along with attempted murder charges.

“Please help me,” Yasmine implored. “They only are charging her with a felony battery with a deadly weapon. I feel like she deserves attempted murder and also this is a HATE CRIME. SHE CALLED ME A NI**ER & THERE ARE WITNESSES,” she wrote.

Yasmine’s mother is Joe Jackson’s daughter Joh’Vonnie Jackson who was reportedly close with her dad but not the rest of his side of the family. Joh’Vonnie took to social media to share an image of her daughter’s bra, which was soiled with blood from the hate crime. “Look what this Woman did to my daughter @yasminejackson_ she tried to kill my daughter for being Black,” she wrote. “My daughter has a good heart and has dedicated her time as a nurse to help others. She did not deserve this! F**k anyone who has enough hate in their heart to want to do this to anyone!”

Only in this bizarre country does a white woman hunt and stab a black woman and get to call her “ni**er” without it being acknowledged as a hate crime or an attempt to murder. We hope Yasmine gets the justice she deserves here and that the protests and organizations pooling together can actually make a difference and incite longlasting change.

Comment by mr1stroke on June 22, 2020 at 7:55pm
vaughn mitchell stop sucking my dick you dumb n*****, you never contributed to anything on here unless its something you hear on tv you are one of those n***** who cant think for your self, just like when biden says if you dont vote for him youre not back, n***** like you are happy to agree instead of questioning what he means, dumb niggers cant think, you are for ever slave, sit your dumb ass down unless you have something we can learn from, for a n***** who went to the only black college you sure is dumb as f***, if i was involve with that college i would sue you for using them as reference you dumb n*****, and yes i am talking to niggers like you not black people, learn the difference niggers are noth worthy

Comment by vaughn mitchell on June 22, 2020 at 7:26pm
@ Trevor millings, you ever notice when their is crime, like the one where a white person stab a black person, that racist white a****** Mr 1 dick, start talking about black on black crime, when the article is not about black on black crime? You have to view how racist that b**** is to come on here and try to divide us like we are not stupid to notice that he is racist white man, with a played out black power logo from the 60's lol. You think the riots are bad, wait until they execute Julius Jones, for a crime he did not committ. Oklahoma, will find out what BLM, mean, the whole world is watching.

Comment by vaughn mitchell on June 22, 2020 at 7:18pm
@ Trevor millings, have you ever been to Albany, upstate? They are white, not pink, the color of their skin is pale. Maybe because it's more colder but they are white. Minority does not always mean minority, Spanish people are minority , Asians are a minority. Whites are listed as the majority because there are more of them. When the report came out that Hispanics, which they include Mexicans, would overtake white people in the U.S., in a couple of years what did they do, deport them, why do you think Trump, block people from coming to the U.S. for citizenship, he stated he wanted white Europeans coming to the U.S.. Why do you think the U.S. have a census.

El-Bull ,I agree, this term! people of color is nothing but garbage talk. I'll be hearing some people mainly on television use these terms people of color, minority and Black people all in the same sentence, what kind of nonsense talking is that? The fact of the matter is theirs no such thing as a white person, i have never seen one in my entire life, those people who they are saying is White is actually Pink people from deepest Pink to palest pink.

The facts are theirs only one race and that is the Human race and they all have a color, from black to pale pink, In the world of plants and animals theirs White , but theirs no white human.

James Carter all people of color need to arm their selves right, its a good idea, but i dont see you people say that about the violence in the neighborhood, how come no one call to stand up to the gang members or those killing those young kids in the community. How come no one calls for people to arms their selves against those gangs in the community, why is it when why people express their hate against blacks or the cops terrorize blacks that many want to be upset? Injustice by any one is injustice to every one, injustice some where will eventually becomes injustice every where, you folks condone black on black crimes and the violence in the community and watch innocent lives being taken away, thats one of the reason why i had to move away from the community, i cant keep watching my back every second thinking i wont live to see another day due to jealousy and hate just because i am chasing success, raise hell against all crimes against blacks and every one will respect black blood, the easiest person to kill or blame in America for any crimes and get away with it is a black person

James Carter Stop with the people of color BS, it was created by white liberals who mean us no good same as white conservatives. All that does is water down and marginalize Black Americans and lump us in the basket with other people who could give two shyts about us. and allows them to usurp our continued civil rights movement. I am indigenous to this country and am not a person of color.....

I've said it before and I'll say it again All people of color need to either arm themselves or take up some soft of self defense.