Meet the new Miss USA: Asya Branch, 22, is a gun-loving Trump fan from Mississippi who has met the President at the White House and believes the country has 'lost trust' in the media

The new Miss USA is a gorgeous Black beauty queen. But she's coming under fire today, after people learn that the beauty may have been a supporter of President Trump.

Asya Daniels is from Mississippi, she's a registered Republican, and she attended Trump's White House to participate in talks with the president.

She even sang the National Anthem at a Trump rally in Mississippi back in 2018. That rally, along with many in the Deep South was filled with vile racists.

During last night's pageant, Asya told the socially-distanced audience how she had participated in a White House roundtable on criminal justice reform with President Donald Trump - who used to own the pageant - and that she was passionate about the second amendment.

Asya Branch, 22, impressed judges with her discussion of how the country had 'lost trust' in the media at the Elvis Presley-themed finals at the Graceland mansion in Memphis, Tennessee.

Branch, a marketing major at Ole Miss, became the first African American to be named Miss Mississippi USA in 2018 and is the first Mississippian to win the title. 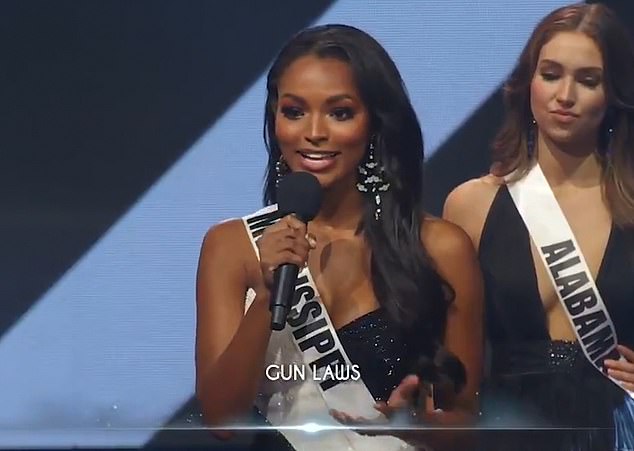 Branch performing the national anthem at a Trump rally in Southhaven, Mississippi, in October 2018

Branch described how she had participated in a White House roundtable on criminal justice reform with President Donald Trump and was deeply concerned with the issue (pictured: Branch talks with Trump, Mike Pence, Lindsey Graham, Jared Kushner and others in November 2018) 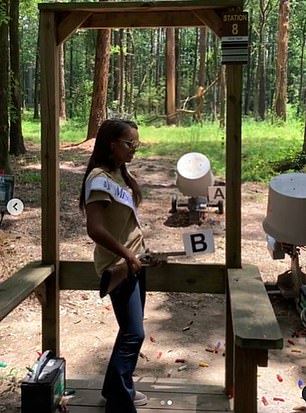 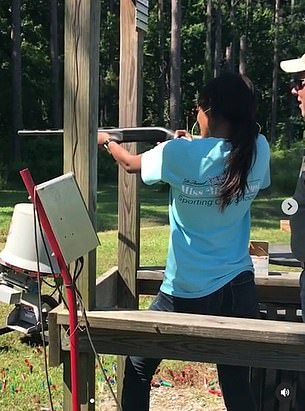 A farmer's daughter, Branch last night said: 'As someone who grew up in a home with guns, I learned at an early age how to load, how to fire, and gun safety' (pictured: clay shooting action from her Instagram page)

Miss Mississippi was also asked about how a divided America could come together in the wake of Trump's likely election defeat.

Miss Mississippi 2018, Asya Branch participates in the Eveningwear portion of the 1st Night of Preliminaries of the Miss America 2.0 competition at Atlantic City Boardwalk Hal on September 6, 2018 in Atlantic City, New Jersey

'I think this is an issue of trust,' Branch said. 'We've lost trust in the systems that seem to keep our country running, from the media to business to our government.

'And it's all about restoring that trust and coming together and working together to heal and trust in these systems. If want to continue to be the greatest nation we're going to have to set a better example.'

Branch sang the national anthem at a Trump rally in Southaven, Mississippi, in October 2018 - a video of that performance no longer appears on her Instagram.

Her post had said: 'Incredible honor to sing the national anthem tonight in Southaven for the President Trump rally.'

Branch, whose Instagram profile also features videos of her firing shotguns, chose to address the issue of gun reform last night while maintaining that she is a keen advocate of the second amendment.

'As someone who grew up in a home with guns, I learned at an early age how to load, how to fire, and gun safety,' Branch said. 'And I think that education should be available to everyone.

'I believe that we should require people to pass safety and training before they are allowed to purchase a gun and before receiving a permit.

'I think it's important that we not ban guns because obviously people will find a way to get what they want anyways. I think it's our second amendment right. We just need more safety surrounding that.' 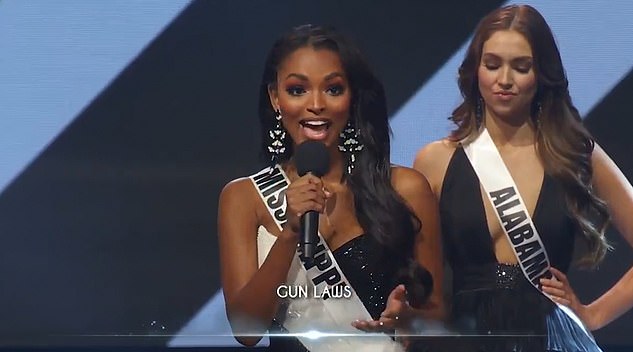 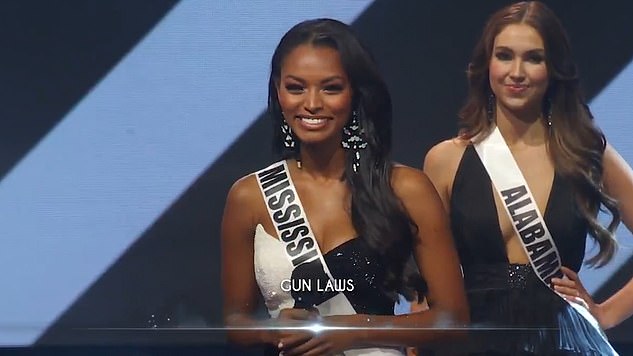 'As someone who grew up in a home with guns, I learned at an early age how to load, how to fire, and gun safety,' Branch said. 'And I think that education should be available to everyone' 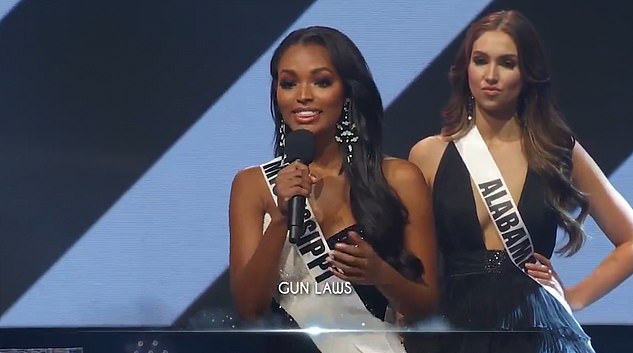 Branch said: 'I believe that we should require people to pass safety and training before they are allowed to purchase a gun and before receiving a permit'

Miss USA, which was formerly owned by Trump before it was sold to WME/IMG in 2015, was broadcast by cable channel FYI. It used to air on Fox and before that NBC.

The competition included an evening gown and a swimwear round, unlike its rival competition Miss America which has removed the swimsuit section in a bid to modernise.

As for Branch's prize, along with the networking opportunities and endorsements it will reap, previous winners have been given an apartment in New York City, a year's salary plus living and travel expenses and a personal stylist from the Miss Universe Organization.

It is unclear if the Miss USA crown still affords those privileges but it is nonetheless a prestigious title, one which Branch's boyfriend Briley Morgan will doubtless be immensely proud of her for.

Morgan, a sound engineer, also attended the University of Mississippi. 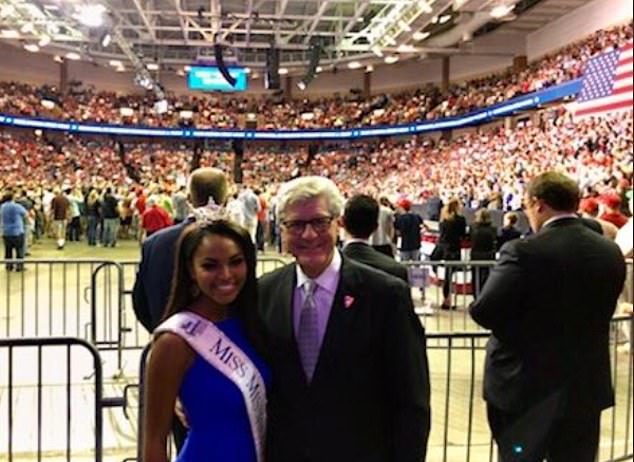 The sixth of eight children added that 'staying true to who you are' was the reason for her success.

Branch has previously described how her father was jailed when she was ten-years-old and was absent for much of her childhood.

Miss Mississippi calls for guns not to be banned in speech

Comment by BIIGMANN on November 14, 2020 at 1:05pm
There’s always been ignorant blinded Black people.
Hating yourself and your own people will never die.
She’s a f****** idiot and she’s not even pretty!

Comment by EAGLE on November 11, 2020 at 4:00pm
To me one of the most ignorant comments one can make is to call her a negative name or racist.
I may not agree with her or lots of people's comments or perspectives on issues.
Just because we are POC do not mean we should or do all think the same.
We are a diverse group in thinking just like we are in shades.
When we start labeling or saying one is this because how they dress or think or the music and hobbies they like who is the real ignorant person.
One should be able to express or do what they like if not causing harm to others.
Brings back what someone once asked me.
What is acting black or being black.
The response is there is no such thing as POC have been involved in every aspect of this world.

Comment by vaughn mitchell on November 10, 2020 at 9:11pm
Well she is done. I wonder what justice reform Trump has done beside pardoning a few black people and showing them off to the media. Every year , you read stories of black men who has been in prison for decades for crimes they did not commit, and Trump, did not set them free. Obama, pardon more people than any other president not name FDR, and that is because FDR, serve three terms. Obama, visited prisoners in prison, the only president to do so while Trump, lied about a virus that killed over two hundred thousand and counting. She will marry a white man.like that coon lawyer from Kentucky.