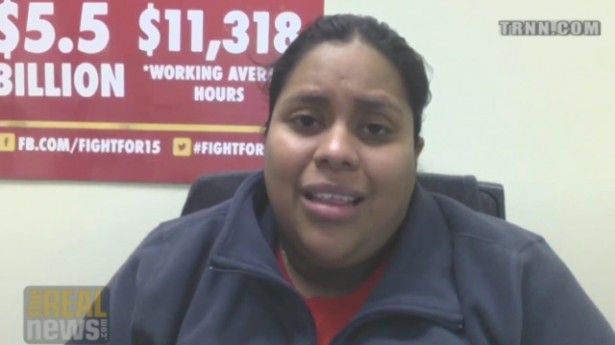 A single mother who has been working at McDonald's for 10 years was detained by police last week after she interrupted the company president's speech in Chicago to confront him about low worker pay.

Crain's Chicago Business reports that 26-year-old Nancy Salgado was part of a group protesting the event, asking company officials to raise worker wages to $15 an hour and allow employees to form a union without fear of retaliation.

Protestors were detained for an hour, threatened with arrest, and ticketed, according to Chicagoist.

Here's what Salgado said to McDonald's USA President Jeff Stratton: "I'm a single mother of two. It's really hard for me to feed my two kids and struggle day to day. Do you think this is fair that I have to be making $8.25 when I've been working at McDonald's for 10 years?"

Stratton's response: "I've been there [at McDonald's] 40 years." 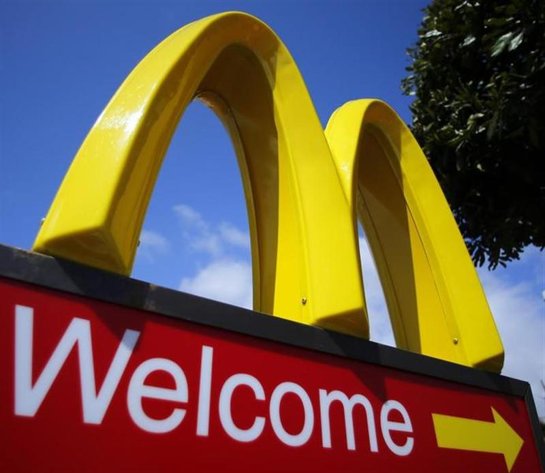 Salgado told The Real News that she still works at McDonald's (although they cut her hours back) and she loves her job, but she wanted to speak out because she thought her voice needed to be heard.

"It gets harder and harder," she said. "Sometimes I can't provide a gallon of milk in the refrigerator."

Comment by Alan Murray on October 16, 2013 at 4:05am
They pay you just enough so you done quit, however the CEO & the executives are making millions In salary. Each person is making $15,000 for the owner, why can they get a raise to $15/hour. It's because this is just modern day slavery, you've become a wage slave. http://myhelp4you.info

Viva la reverloution ! Worker must stand up for their proper wages and basic rights.

Comment by seabee718 on October 11, 2013 at 4:49pm
Why not $15. Why should the executives make literally several hundred times the salaries of the workers who grease the wheels, and really keep that machine running. If you are working full time, and dedicating years of your life towards building the company's brand, and increasing their profitability then why shouldn't you be compensated fairly? Lets not overcomplicate their jobs- yes she's a fast food laborer, but also let us not minimize their roles, and the efforts that they put in at work every day (everyone can't be Engineers, Lawyers, Nurses, union Tradesman, and over paid wall street bankers- somebody gotta flip dem burgers yall eat-in up!) They too have families to feed, they too desire a decent quality of life etc. They aren't asking for 50g's and a corporate card, or 80G's with bonus potential. We as working class people need to stop acting like crabs in a bucket, and stand in solidarity with one another; whether you are working glass and make 90g's, or 8.25.

Wow, 10 years at MCDONALDS??? She's had the same job since she was 16? Well, on the one hand, as long as she's been there, they should pay her more. And, I'm glad she spoke up workers rights. On the other hand, she should either be moving up the ladder or move on. The world is unfair and since she has 2 kids, its up to her to be realistic and start planning her way out of poverty, cause McDonald's could care less about her and her kids. And to be honest, she's doing a 16-year-olds job, not a 26 year-olds. Time to move on sis.

I would say at least twelve management $15 and hour but what we also have to look at also is that workers in other industries will either have to compensate or re adjust there wages there are people doing harder work for less !!! It I hate to use this pun a slippery slope!!!!

Comment by tiki bey on October 11, 2013 at 6:01am
There has to be a better way, she needs to look for another job. Her problem is she stayed there way too long