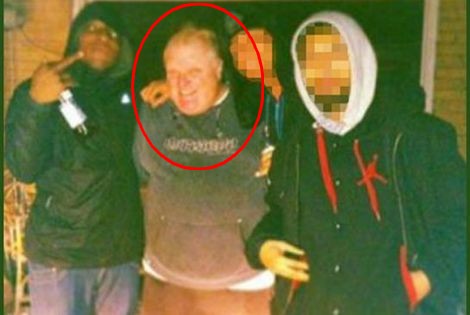 Those words aren't what might normally be expected from the mayor of Canada's largest city. But little is normal nowadays for Rob Ford.

Eight days ago, Gawker and the Toronto Star published stories stating their reporters had seen a cell-phone video showing Ford, as the Star described it, "inhaling from what appears to be a glass crack pipe." Later in the video as described by the Star, an "incoherent" man both the Star and Gawker claimed to be Ford ranted on a number of subjects, from Liberal leader Justin Trudeau to the high school football team he coached.

Except for a brief comment the next day deriding the stories as "ridiculous," the characteristically voluble Toronto mayor has been quiet -- at the advice of his lawyer, he said then, who advised him "not to say a word."

Until Friday, when he made a statement.

In his statement, Ford alluded to the end of his time as a coach for the Don Bosco Eagles high school team, as well as the departure of his mayoral chief of staff Mark Towhey. He didn't elaborate on either relationship.

Nor did he admit to any wrongdoing -- saying there was no real proof that he did anything wrong.

"I cannot comment on a video that I have never seen or does not exist," Ford said, referring to the 90 seconds of footage that two Star reporters and one Gawker journalist claimed to have seen but that hasn't been aired on TV or posted online.

"It is most unfortunate, very unfortunate, that my colleagues and the great people of this city have been exposed to the fact that I have been judged by the media without any evidence," the mayor said.

Amid the media firestorm, Ford insisted that he's still hard at work for the people of Toronto, as a conservative leader focused on making the city government more efficient and effective.

"We're continuing to fight for the taxpayers every day and it's business as usual at City Hall," he said.

His demeanor Friday was markedly different from the man Star reporters described in the video, which the newspaper claimed was shot last winter.

In it, the Star journalists wrote that "an off-camera speaker ... goads the clearly impaired mayor," who at one point seems to mutter, "Everyone expects me to be right-wing."

The newspaper said that the mayor appears to refer to the players on his Don Bosco football team as "just f---ing minorities."

Deputy Mayor Doug Holyday, for one, stood behind Ford on Friday -- and lashed out at the news reports.

Echoing the mayor, Holyday questioned the Star for its "accusation of a video that does not exist or we haven't seen."

The deputy mayor had especially harsh words for Gawker, accusing it of dealing "with a bunch of extortionists" and unfairly tarnishing Somalis who live in Toronto by claiming Somali drug dealers were behind the video.

"I think it's disgusting," Holyday said.

I may be innocent, I mean where is the video footage they saw?

Wow @Unell isnt that something? This is what goes on all the time. But our people will make every other excuse in the book, except whats obvious in a situation like this..

Did anyone else notice that the face of the black guy is shown but not the other guy. Just saying.

dem should smoke grass instead it is better than crack

Well D.C. Mayor Marion Barry got caught on FILM smoking crack with a hooker and got re-elected several times so nothing is a done deal.

dey all smoke it my goodness