Mandatory HIV Test Ordered For All Members Of T&T's Defence Force!! What Are Your Thoughts? 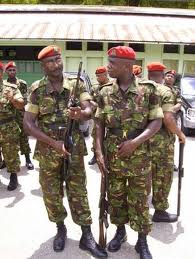 Trinidad -- Trinidad and Tobago Staff Brigadier Col. Roland Maundy has ordered that all members of the Defence Force undergo HIV tests, but his directive has been met with objection from soldiers.

The mandate came into effect on January 14 and is expected to run for six weeks.

The Trinidad Express reported that sources say so far members of the Coast Guard and Air Guard have already been tested.

On Thursday, members of the Regiment located at the Knox Street, Port of Spain, headquarters underwent their tests.

In a brief interview with the Express, Maundy confirmed giving the instructions for the testing.

Maundy said, "Yes, it is a research project."

He disclosed that he also subjected himself to be tested.

Despite being instructed that the testing is mandatory, several members of the Regiment say they will not be heeding the instruction since, according to them, their rights are being violated. Some of the soldiers are even seeking to enlist the services of lawyers.

Comment by Dellano on February 21, 2011 at 6:17pm
i guess the got something and dont want to be found out

Comment by Bombahdrop on February 18, 2011 at 1:54pm
Thats what i thought they do physicals on soldiers when they join and on a regular basis if needed so i dont see what the hell this issue is about jus do the dam thing my God

Comment by deborah rollerson on February 18, 2011 at 10:05am
Yes it is done in the USA, Yes it is very important to know your status, Yes it is definitely for all of our safety Yes Yes Yes for all the positive comments made here. I am begging to think there is possibly an "OUTBREAK" going on as well. Besides they have the oral swab that is 100% painless for all those who faint at the sight of a syringe. DWL.

Comment by JASON TROTMAN on February 18, 2011 at 1:16am
what is the big deal?  We get tested all the time....it's mandatory for the US.Army to get that done...it's for the better that you know anyway.

Comment by Rebbel Uneek on February 15, 2011 at 6:28pm
Wow! I find it quite amusing that people doesn't see this as a great thing. Some of the comments is quite puzzling too..I'm in the US Army and HIV testing is MANDATORY for us every 12 months at home station. In addition before and after every combat deployments (12 months or which ever comes first) to Asia, Europe, Kuwait, Iraq, Afghanistan etc. etc..we are tested..non negotiable. All information is guarded by our privacy act, if unfortunately a soldier is tested positive...he/she is still allowed to serve and is given the required medical attention. This is the military way of control and prevention which is smart, if a soldier on base, or worst yet a deployed soldier that is unaware he/she is infected and is having sex; can you imagine what could happen in such a controlled environment?. If you work for the government..any government, a lot of things are not negotiable. It is the right thing to do...how can you defend your country if you are not medically competent? ........My (MEDPROS) are GREEN.

Comment by Maria PhillipKnight on February 15, 2011 at 4:12pm
Fear is a terrible thing added to that the soldiers is of the belief that either they will be kicked out of the defense force or perhaps they will be ostracized. According to the headline  mandatory testing it didn't say what will happen to any of the soldiers if they tested positive,maybe, that is why the soldiers don't want to test or perhaps they already know their status and don't want anyone else to know.  Just man up and take the test who knows the life you save may be your own

Comment by Bombahdrop on February 15, 2011 at 1:06pm
@janice when it reaches that point then go get tested but it should be a choice and i dont agree that its mandatory in the U.S or they would not be having campaigns about it almost everyday on the tv about go and get tested so its pretty much a choice. and a human right. I check myself regularly but im not mandated i do it so i can know whats up and thank god i am in good health

Comment by Janice T Roach on February 15, 2011 at 1:02pm
That is mandatory in the US, Why object if you don't have a reason too! The fact of the matter is, they just sit on their ass until they get old and fat. If there was a need to give blood to one of their fellow men, they would want to know that the persons blood is cleared from all diseases. to save a life.

Comment by Bombahdrop on February 15, 2011 at 12:59pm
People in office making all these decisions are smoking crack and chasing the dragon they got s*** all wrong they must be real bored coming up with all kinds of stupid laws that they wish to enforce like farting in public jus stupid ass crackheads.

If its confidential i see nothing wrong. Still it should be the individuals choice to get tested as their rights. wouldn't you want to know if you need to take better care of yourself if you do have hiv. What makes me angry is that the world deals with the same dam issues and some take measures and some don't what id like to see is that its the same with the rest of the world for instance if they make this law happen it should apply all over the dam world why come with something like this and only pertain to one ass country and catergorie, why?