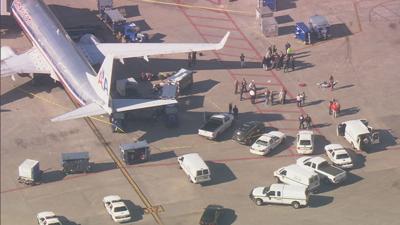 Miami-Dade Police and the officials from the Federal Bureau of Investigation (FBI) have arrested a 37-year-old man carrying a type of explosive that set off alarms at Miami International Airport on Tuesday.

The man was destined for Jamaica.

The bags were being unloaded at Gate D-17 from American Airlines flight 2585 from Boston when the explosion occurred.

Officials say the man who was bound for Jamaica had hundreds of blasting caps in his luggage and when one cap ignited others followed.

Later in the afternoon, all of the bags were unloaded from the plane onto the runway and were being checked individually by the FBI and Transportation Security Administration officials.

American Airlines said an incident had happened with the flight, but that all 148 people on board were okay.

Initial reports indicated that the explosion had occurred due to an aerosol spray, but it was later determined that they were blasting caps.

The FBI has taken over the case and is investigating the incident and the baggage at MIA.

The man whose name was not immediately released was transported to a Federal Detention Centre.