Man 21, Beat His Girlfriend's Son So Badly He Was Bleeding From His Eyes And Is On Life Support 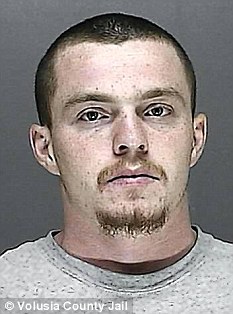 A 21-year-old man beat a toddler he was babysitting so severely he was left bleeding from his eyes and is now in hospital fighting for his life.

Brian Bouchard, from Daytona, Florida, was arrested after abusing the 14-month-old son of his girlfriend, who he was caring for while she was out.

Mother Brittney Dishong said he called her frantic two hours after her son Isaiah Mitchell was injured but still had not called 911.

She arrived home to find him unconscious and not breathing in the driveway.

The toddler was taken to hospital on Saturday night after deputies arrived at the home to find the child's head and face swollen and bruised.

Volusia County deputies grew suspicious when Bouchard told them different stories about what happened to the boy, including that he fell from his arms, that he tripped and fell to the ground and that his knee accidentally rammed into the back of his head.

But doctors said there was no way the 14-month-old could have cracked his skull in so many places unless it was caused by a brutal beating at the hands of a person. Spokesman Gary Davidson said: 'He is accused of physically abusing a 14-month-old toddler so severely that the child is in the hospital fighting for its life.'

Bouchard is said to have told the baby's mother he was scared his probation would be revoked due to a grand theft charge.

According to the Orlando Sentinel, Ms Dishong told police she suspected Bouchard had injured her child as he had flicked him on the head in the past as a means of discipline.

She also revealed that Bouchard, who is not the father but fathered another of her children, drank a lot and smelled like a brewery when she returned home.

'I may never be able to hold my son again,' she said.

And the a****** didn't even call the cops because he was scared 'his probation would be revoked'. What does he think will happen if this baby dies?

Seriously ladies, don't be running out to date after you have a baby. You have more important things to worry about and let's face it, you are going to get scumbags like this one. Responsible men are not looking for new baby momma to date. Not to say they won't date single mothers, but they will want a single mother who is somewhat stable and don't need them to play the save-a-ho role. They don't want to assume the daddy role as soon as they meet you. When you are in a desperate position like this you will take men who are bottom feeders. If you are going to be a single mother, then be a single mother. Don't run to any jerk that will have you just to have a man around.

honestly, sometimes I think young mothers who break up with their baby fathers should wait before they start dating again. I hear this kind of thing too much and 85% of the time it's a boyfriend/step father that does this to the child. The other 15% it will be the childs natural father but usually it's not.

I'm not saying there's not good men out there who can handle taking care of another mans child, but this happens way too much. Wait till the baby is at least old enough to do some stuff for itself and can tell you if your boyfriend is doing something foul to it. Any time I leave my son with anyone other then immediate family for any amount of time (which is not often...in fact I can only think of one person other then family whose ever baby sat my son) I have to ask 20 questions, and I will keep asking ever so often to make sure he keeps giving me the same answers. People are on some weird s*** these days and you can't be too careful.