Dionisia Pacquiao doesn't play when it comes to her son Manny. On Saturday, April 12, at the MGM Grand she appears to put some kind of hex on Timothy Bradley during his fight with Pac Man.

Watch up top as Dionisia holds a prayer card and rosary in her hand while pointing a middle finger at Timothy while giving him the evil eye and chanting only God knows what. 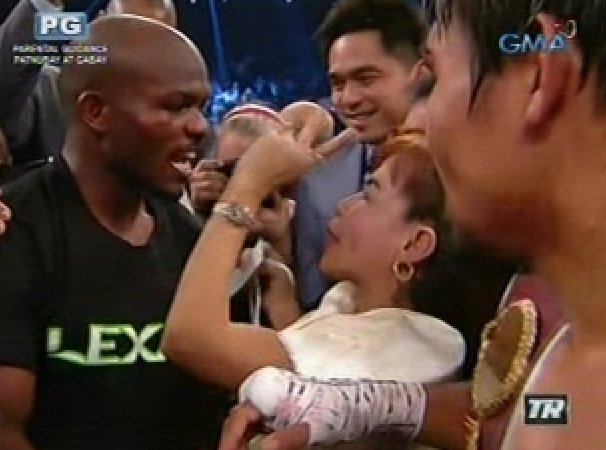 LAS VEGAS -- When Manny Pacquiao finally arrived at his post-fight press conference at the MGM Grand about two hours after his redemption fight had ended Saturday night, he came with 32 stitches in his left eyebrow and the gait of a man who had met his match.

But the wide grin and look of utter relief said otherwise.

Nearly two years removed from one of the most controversial decisions in boxing history, Pacquiao had finally gotten his revenge and the WBO welterweight belt he wanted so badly back from Timothy Bradley. And now he could return to the Philippines in peace and await the birth of his fifth child later this month.

This time, the Filipino politician left no doubt. And no controversy.

Even Bradley had to agree that Pacquiao defeated him in their rematch before 15,601 raucous pro-Pacquiao fans at the MGM's Grand Garden Arena.

And unlike the first bout, there was no argument from the ringside judges. They gave Pacquiao the unanimous decision -- by scores of 116-112 twice and 118-110 -- after watching a skillful exhibition of speed, power and footwork from the 35-year-old southpaw.

Nearly two years ago, Bradley won by split decision, which sparked widespread criticism of the judges and an investigation by the Nevada Attorney General's office.

On this night, Bradley had no answer for Pacquiao and admitted as much after the fight.

"I tried, I really tried," Bradley said. "I really wanted that knockout. Manny is a great fighter, one of the best in the world. I tried throwing something over the top. I knew I had to do more in this fight than the last fight."

While Bradley threw more punches than Pacquiao (627 to 563), he connected on only 22% of those, with Pacquiao deftly blocking many, and Bradley going for the big shot, swinging wildly and missing more often than not.

Pacquiao's trainer Freddie Roach said he thought Bradley was going for a one-punch knockout. "He was swinging for the fences," Roach said.

Pacquiao (56-5-2, 38 KOs) admitted he was going for the knockout throughout the fight to prove he still had the killer instinct. "Yes I tried to finish him several times," Pacquiao said. "Many times I hit him hard, but he was still there,

Bradley said he pulled a calf muscle in the first round and his trainer, Joel Diaz, said, "Once that happened, I knew there was really nothing to work with."

Bradley did not use it as an excuse and refused to talk about it in the post-fight press conference. "I have no excuses," said Bradley, who limped into the press conference. "Pacquiao was the better man. The reason I love Pacquiao is that he doesn't duck anyone."

Pacquiao said he suffered from leg cramps, which bothered him in the second half of the fight.

Pacquiao, who was guaranteed $20 million, was careful not to get caught by a punch as he did in 2012 against Juan Manuel Marquez that knocked him out cold with one second left in the sixth round. "I didn't want to get careless," he said.

But he did suffer a nasty, jagged cut over his left eye from an accidental head butt in the 11th round that took 32 stitches after the fight.

Pacquiao said he could probably fight for another two years and wouldn't mind a fifth fight with Marquez next. "But it's up to my promoter Bob Arum."

That fight could very well happen. Pacquiao is the mandatory for the winner of the May 17 Marquez-Mike Alvarado fight at the L.A. Forum.

The heavily pro-Pacquiao crowd was a pleasant surprise for the new champion. "I was surprised. I felt like I was in the Philippines," he said. "Even the Mexicans and the Americans were cheering for me."

@Dexter, what fight was you watching Bradley, one the first fight, look how many times Marquez, fought Pacman, and lost and alot of people believe Marquez, won some of those fights, by the way I love how Marquez, knock Pacmans ass out, he put Pacman, to sleep, but Pacman, would have to take a paycut to fight Floyd, and it won't happen cause Bob, wants his money, unfortunately Floyd is the Champ. Mayweather will stay in front of Pacman, and trade punches, stick and move baby.

Comment by Dexter on April 14, 2014 at 10:22am
Congrats Pac Man. I like the shirt pacquiao was wearing pre fight. It said "The Champ Knows". Directed to the fake champ Bradley. Bradley was given a Pac Man's belt as a gift 2yrs ago. He didn't win that fight. Marquez Pac Man 5. Let's get it on.