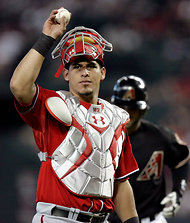 Kidnappings have plagued Venezuela in recent years and occasionally affected major league baseball players. Some of them have had family members taken away at gunpoint and held for ransom.

In what appears to be a first, however, a major league player has now been abducted. On Wednesday night, Wilson Ramos, a catcher for the Washington Nationals, was taken by several men outside his parents’ house east of Valencia, a city of over 2 million people that is third largest in Venezuela.

Ramos, 24, was a highly touted prospect as he worked his way up through the Minnesota Twins orgnaization but he was then traded in July of 2010 to the Nationals in exchange for closer Matt Capps.

In 2011, in his first full season in the majors, he played in 113 games for Washington and had 15 home runs, 52 runs batted in and a .267 batting average, solid numbers for a player trying to establish himself at baseball’s highest level.

Major League Baseball’s department of investigations is taking part in the efforts to free Ramos and has several investigators now stationed in Venezuela and working directly with the authorities there.

In a written statement, Major League Baseball and the Washington Nationals said their “foremost concern is with Wilson Ramos and his family, and our thoughts are with them at this time.”

The State Department also weighed in on Thursday afternoon, with the spokesman Mark Toner using the daily press briefing to say that the incident was a “big concern for us.”

The United States knows the “real danger of kidnappings and violent crime in Venezuela,” Toner said.

Venezuela is indeed struggling with one of the world’s highest kidnapping rates. The National Statistics Institute estimates there were 17,000 kidnappings there from July 2008 to July 2009. Most of the abductions are never reported to the authorities, the institute said.

The large majority of abductions in Venezuela are so-called express kidnappings, in which victims are released within a day. But other cases, as Ramos’s abduction appears to be, are more elaborately planned by criminal gangs, which operate with a large degree of impunity in Venezuela.

While Venezuela’s diplomatic ties with the United States have soured, the countries maintain a strong baseball relationship, with American players and managers still hired by Venezuelan teams and Venezuelans emerging as a top source of talent for the major leagues.

Some relatives of professional Venezuelan players have been previously kidnapped. The 56-year-old mother of Victor Zambrano, a former pitcher for the Mets, was rescued in 2009 after a three-day abduction in Aragua, a state near the capital, Caracas.

The 11-year-old son of Yorvit Torrealba, a catcher for the Texas Rangers, was abducted on the outskirts of Caracas the same year, along with two of the boy’s uncles, but they emerged unharmed. The brother of Henry Blanco, a catcher for the Arizona Diamondbacks, was fatally shot in 2008 after being kidnapped near Caracas.

Kathe Vilera, a spokeswoman for Ramos’s Venezuelan team, the Aragua Tigers, said Thursday morning in a message on Twitter that his family had not yet been contacted by his abductors. “All the authorities are working in the case,” she said. “We’re still praying.”

Law enforcement officials in Venezuela said the car used in Ramos’s abduction had been recovered Thursday morning. The officials said that the discovery of the car had helped their investigation and that they had their “best specialists” working on the case.

Major League Baseball’s department of investigations was created after the Mitchell report on performance-enhancing drugs was released in 2007. Since then, the department’s responsibilities have expanded beyond drugs; the investigators have worked in Latin America to combat identity fraud by players and bonus skimming by scouts.

The department has worked to establish closer ties with law-enforcement officials in the United States and Latin America, although it is unclear how receptive the Venezuelan government has been to its overtures.

TEAM AMERICA WORLD POLICE can't fix the problems in their own backyard. SMDH

I have never heard of these kidnappings.  The media is not very vocal about real news.  I pray for his safe return!

i will be praying  for his safe return..