K. Michelle will not be appearing on Love & Hip Hop: Miami anytime soon, and the songstress says that she doesn't do well with "crackheads," an apparent jab at the current lineup.

K Michelle just spilled a bunch of tea on her ex boyfriend actor Idris Elba - she told the actor "f*c* your baby"
According to the singer, Idris called K Michelle to tell her when his baby mama was in labor and she yelled at him and told the actor, "F*c* your baby."

K Michelle also spilled some more tea. She claims that when the African actor was first trying to date her she was weirded out. According to K Michelle she was, ”used to fried sushi " And she slash said that she "didn’t know anything about eating fufu”. Fufu is a popular African dish.

K Michelle had more to say. According to her Idris cried on her shoulder when he didn’t get an Oscar nomination for Mandela.

K. Michelle Unveils Her NEW BODY After Getting Her SILICONE BUTT IMPLANTS Removed-What do you think?

K Michelle is blasting Amber Rose - for her comments about Bill Cosby. Amber called Cosby a "rapist" on Twitter - even though he was never convicted of rape (only sexual assault). And she made other statements against Cosby that many felt were "racially charged."

Well K Michelle is speaking out against Amber. K Michelle took to Twitter to BLAST the instagram thot-model. According to K Michelle Amber's only source of fame is "s*cking Black men's d*c*."

Amber has routinely made comments that many suspected were "anti-Black." For example, Amber has denied being "Black" in the past - even though both of her parents have African lineage.

Amber previously posted (and deleted) a photo that read, “So if your momma came to you and said “this guy raped me 36 years ago’ would you be asking for proof?” The caption under the post was even more damning and read;

“No you wouldn’t. So stfu. Everyone said ‘Awwww poor Bill Cosby, he’s gonna die in the first 2 years of his sentence’ But I said ‘I hope he serves the full 10 years then dies’ I’m wrong and wishing death on him? FOH Stand up for a Rapist if y’all want to. I said what the f*** I said PS the only reason s*** was deleted on the last Bill Cosby post is cuz you can’t put our “pres” name and “die” in the same caption or FB will f*** ur algorithm up and I’ll be d***** if I let two sexual predators f*** with my money.”

Look at what K wrote:

“Annoying. You have no room to speak out on Bill Cosby or black man for that matter, being the only thing you’ve done is s**k d**k,” she tweeted. “They love to F*****G destroy our people, and y’all so gullible you sit there and help them!”

“Pissed! Tired! Racism is alive!” she continued. “I have no love for rapist and for the demeaning of women. We are not and have never been the lesser. But I also don’t respect and i’m very aware of the falsity that happens towards my people of color in the industry in order to destroy and promote the lesser!”

K Michelle’s Newest FACE LIFT Has Her Looking Completely UNRECOGNIZABLE . . . She Now Looks Just Like . . . JHENE AIKO!!! (Does She Look BETTER . . . Or WORSE) 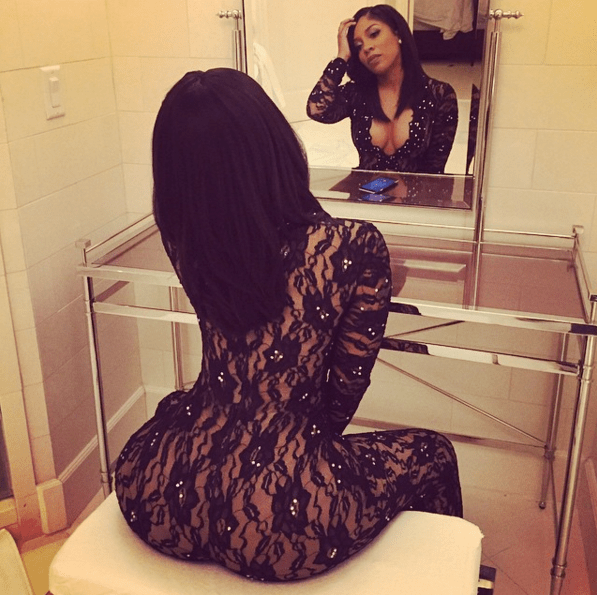 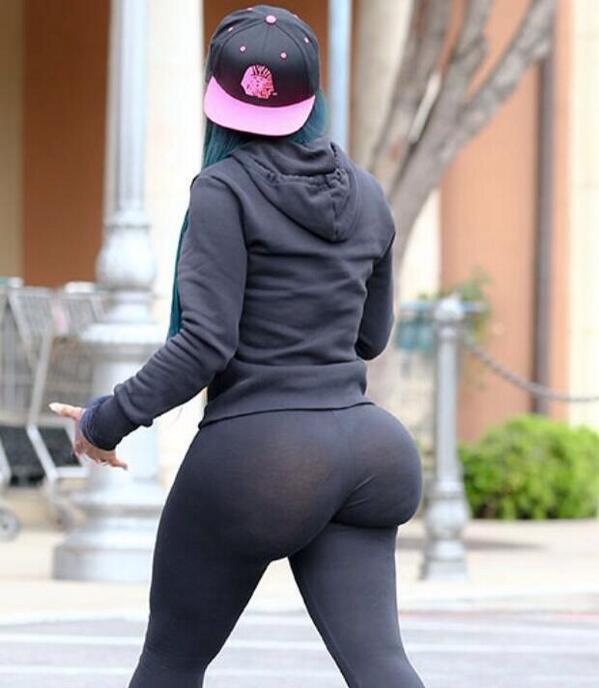 R&B singer K. Michelle is a new woman – she got the silicone SUCKED OUT OF HER BUTT.

K. Michelle has spoken openly about getting ILLEGAL BUTT INJECTIONS in the past – but she decided she would remove them, for health reasons.

“I had a big a$$. I already had one. I was insecure. I was like, ‘I want a big a$$, I want some titties, I want some teeth. This is what I wanna do.’ I just did it. It felt good. It was a temporary bandage on some issues with me, and it felt good at the moment. Now I just want to be me, who my mama made me,” she stated.

We’ve known this move was coming for a while now. Michelle has claimed in the past that her exaggerated shape was preventing her from getting serious roles and positions within the industry.

But the health issues are proving too much for the r&B starlet.

“For me, I’ve always been open. I’ve always been curvy, but it was never enough,” Michelle told The Real. “I thought, ‘I’m having trouble with men, right now and maybe if I had a big ol’ huge butt, then I’d get bigger love.’ So that’s what I did. I did butt; I did hips. Now I’m to the point that I’ve been tired of it for years, and now it’s affecting my health.”

And the result looks pretty good. Her new butt is still big but in a NATURAL LOOKING way. We like it.

R&B singer K Michelle has always EMBRACED plastic surgery. She hot her boobs done, and her butt, and had LIPO.

Last month she decided to turn to her FACE – and got extensive work on her head area.

And fans are AMAZINED at how different she looks now. Some say, she looks just like Jhene Aiko.

"Love and Hip Hop" star Kimberly Michelle Pate "K.Michelle" is rumored to be dating Olympic Gold medalist Ryan Lochte, although the professional swimmer's mother recently denied that he has a girlfriend.

The reality TV star recently tweeted her support for 27-year-old Lochte, who is currently in London competing in the 2012 Olympic games, in which she revealed what critics suspect is her pet name for the swimmer.

"OK ITS GOING DOWN THE 2012 OLYMPICS JUST STARTED AND MY POOH @ryanlochte IS ABOUT TO KICK A--. SO PROUD OF U. LUV YA," K. Michelle tweeted. 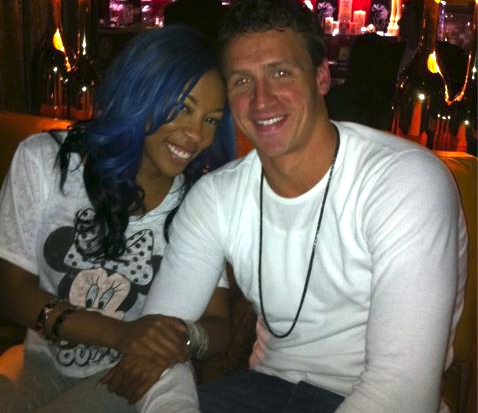 Lochte won the gold medal in the men's 400-meter individual medley on Saturday, which prompted more praise from the Vh1 star.

K. Michelle's supportive tweets were followed by the release of several photographs which show the pair seated side by side at the 2011 NBA All-Star game.

In another photo K. Michelle, 26, has her body pressed up against Lochte's side with her hand resting on his as they both smile for the camera.

While neither of the pair has publicly denied reports that they are romantically involved, K. Michelle recently lashed out at "desperate" bloggers in a Twitter rant which has led some fans to assume that their relationship is platonic. 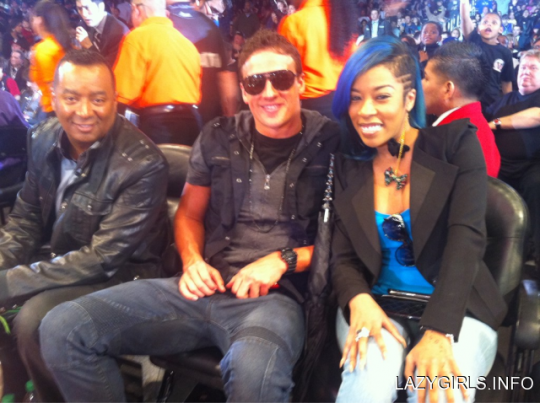 Ileana Lochte, Lochte's mother, recently insisted that her son is single following a string of reports that also linked him to Australian swimmer Blair Evans.

"It just wouldn't be fair to the girl," Ileana added. "He doesn't have the time."

Panache E-P  youre the only one who cares abaout that hoe, no one give a f*** about that reality tv hoe, tha man moved on nobody cares if she was worth it we wouldnt be talking about it, dont ask other people to feel pitty for a slut, if thats your thing do it by your self, we dont care about what you think, if you are comfortable with your self and your action, you dont need to address others, just like i see comments i dont agree with unless i have a question, i keep it moving, so be confident the way you feel you dont need me or others for approval, again f*** her, the man move on with a woman that is worth it he good, now she can go suck somebody dick like she does on those reality shows

Y'all are ridiculous. Really.  She spills her heart, and no matter what, y'all blame the woman.  ms.jmarks mr1stroke  Get a new tune please.  And stop trashing black women.  Y'all are worse than the outsiders.

I listened to her explanation--where she laid her heart out and talked about her own insecurities. And thought to myself, damn...Idris "punkass" Elba aint s***. He allowed her to be villanized and unacknowledged but continues to have babies with white women...but ignores coming to even verbally defend a black woman.

And I knew, I KNEW that the comments would do the same.

Comment by Robert on October 26, 2018 at 1:58pm
These hoochies only good for an hour at most a night..
you don't date these type of women

Comment by vaughn mitchell on October 26, 2018 at 10:01am
Amber , and K michelle, are both ratchets, but Idris Alba, is an idiot if he call his ex, to tell her when his baby mamma is in labor, any black woman would curse his dumb ass out. As for Amber Rose, she is a slut bucket, she went on dancing with the Stars, and did a threesome with her dance partner. Amber, calling Bill Cosby, a rapist, the only man " the me too movement " convicted on bullshit is an 80 yr old have blind african American actor. Harvey Weinstein is not in jail, judge Kavannaugh, is a supreme Court judge, and worse sexual predator is the President of the U.S.. If Black America, believe Bill Cosby, rape these women, then they don't know black history. If Bill Cosby, was white his ass would never be in jail, white women would come out and support him like they did Trump, and Judge Kavannaugh.

Comment by mr1stroke on October 26, 2018 at 7:11am
My uncle always say becareful the women that i lay with those same women defy my level of achievement on life and can bring that your value now looking at a woman who would do all that to her body due to desperation and insecurity someone who would suck dick to be on tv or to get a beat from any bums off the streets that is trash, now at his level of success people looking at him like he was desperate for dealing with her all those lil broke hip hop dudes f***** her

I have no words to say about Kmichelle, she disgusts me

Comment by mr1stroke on October 25, 2018 at 11:33pm
Bombahdrop you already know, you are right on the money i cant even comment on this one lol

Comment by ms.jmarks on October 25, 2018 at 10:39pm
God don't like ugly oui! That's why everything coming to literally bite gett in the ass. Why she only keep talking about Idris to stay relevant? The man moved on and is about to get married. She's still there, like a bitter ex trying to bash him. Let it go girl! If your friends, Jonathan, Michelle, & Paris could come out and say you're a f***** up individual darling yuh pretty f***** up.