Louisville Man Goes From Being Homeless To Owning Three Restaurants 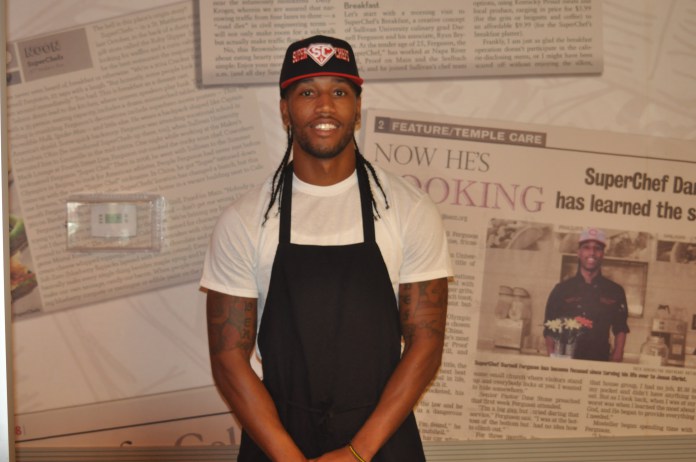 Trials and tribulations are two words that Darnell Ferguson knows all too well. The 28 year-old has struggled with incarceration, homelessness and a lack of self-control throughout his short span as an adult. His life was spiraling out of control quickly and just when things seemed to be at their worst – he made a last-ditch effort and walked into a local church – changing his life forever.

Ferguson was born in Philadelphia but his family relocated to Columbus, OH when he was young. He was raised by his mom and step-dad and credits them for providing him with a very good life. Despite having great parents – Ferguson struggled throughout high school and was on the verge of failing out. During his junior year he decided to transfer to a vocational high school in the Columbus area that offered courses in Culinary Arts.

“I was failing out of high school, then I ended up switching high schools to a vocational school. So I went to vocational school for culinary arts and thought that if I don’t like it, at least I’ll be able to eat good… That was also at the time when Emeril [TV celebrity chef] was huge and I liked what he was doing, so that was one thing that really caught my eye… I liked the uniforms, the professionalism, I liked everything that wasn’t like what I was used to.” – Darnell Ferguson

Ferguson had finally found his niche. He graduated from vocational school and was recruited by Sullivan University in Louisville KY in 2005. He arrived on campus eager to pursue his dream of becoming a world-class chef but was quickly disappointed after discovering that he was only eligible for partial academic funding. Due to his lack of income – he could only afford to enroll in a few evening courses – which was frustrating – and he considered dropping out.

Deciding to ‘tough it out’ – Ferguson eventually transferred to courses during the day and excelled in Sullivan’s Culinary Arts program. His diligence led to him being chosen to be a part of the 2008 Olympic Team in Beijing China. Ferguson was ecstatic by the selection and honored upon discovering that out of the thousands that applied – 22 amateur chefs were selected – and only two of those were African-American.

Ferguson was prospering in college but like most students – he experienced financial hardship. Having not yet found himself – he made the poor decision to start selling drugs to support himself throughout school. Luckily he graduated from Sullivan University with an Associate degree in Culinary Arts without drawing the attention of law enforcement.

However – after graduation he continued selling drugs instead of pursing a career as a chef and his luck suddenly ran out. Ferguson was arrested eight times in a three-month period. Subsequently, he lost everything that he owned and his landlord evicted him – leaving him homeless.

“The last time getting locked up, I remembered being in class and them talking about being a statistic and how once you get in the system you can’t get out… I started thinking that now I’m the guy that I didn’t want to be… That’s when I told myself that I was going to get serious about something I know that I can do, which is cooking…” – Darnell Ferguson

Ferguson began working as a chef in different restaurants throughout Louisville. Eventually he was approached by the owner of a seafood restaurant who asked him to come and work for him as a short-order cook. Initially, he was hesitant based on the position being less prestigious than a chef but the owner offered him $3 more per hour than he was currently earning. Ferguson accepted the job and the experience turned out to be horrible. He decided that this would be the last time that he ever left anything he loved for money.

Although he wasn’t involved in illegal activities anymore – there were still areas in his life that he needed help with. He had a bad temper which resulted in severe arguments with his co-workers at his new job. One day an argument became so volatile between him and his boss that the situation almost became physical. Ferguson was completely stressed out and knew that he needed to make a change.

I went to Southeast Christian and ever since then everything changed for me. I started going to church, starting reading about God because for me, I didn’t know God was real… So that for me was a shock… I wish I would have known this a long time ago but I wouldn’t have listened then, even if you told me… That’s just the truth about it.” – Darnell Ferguson

Things didn’t immediately get better but Ferguson decided that he was going to put his trust in God and let him handle the rest. During his first service at Southeast Christian he heard a sermon about forgiveness and decided to apologize to his boss. He returned to work intending to apologize but was fired before he could get the apology out. He apologized anyway and then went out to his car and cried. Typically he would resolve this situation with violence but that wasn’t an option for him anymore. He went home and prayed and told God that he trusts him now.

He remained unemployed for the next year. He immersed himself heavily in church and focused on opening his own restaurant. After a year of planning he found two investors that were interested in forming a partnership with him. Everything was starting to work out. Plans were made and an opening date was set but at the last-minute one of the investors disappeared before Ferguson was able to secure his investment capital.

Frustrated and embarrassed once again – he didn’t know what he was going to do. A few months later he bumped into an acquaintance that was a restaurant owner who heard about his bad luck. The owner’s restaurant only operated for lunch and dinner so he offered to let Ferguson lease the space during breakfast hours and independently run his own restaurant. This concept is known as a “Pop-Up” in the restaurant business.

Throughout his cooking career and during the Beijing Olympics – Ferguson was often dubbed as a “Super-Chef” for his culinary greatness – so it was a no-brainer that the “Pop-Up” was named SuperChefs.

Business took off fast and within a couple of months – several other restaurant owners approached Ferguson about opening a “Pop-Up” in their locations. Ironically, one of the restaurant owners was the boss that fired him a year ago. Being a man of God now – Ferguson accepted the offer and eventually increased his “Pop-Up” locations to three.

Ferguson was finally living out his dream. He’d overcome being homeless and several other adversities to owning three successful restaurant “Pop-Ups”. Despite being successful – Ferguson began to realize that he lacked full control over his destiny by operating for limited hours in restaurants owned by anyone other than himself. In early 2015 – he initiated plans to convert the “Pop-Ups” into his own full-service restaurant.

After securing an investor and partnering with a friend from college – Rodney White – a full-service SuperChefs restaurant opened on July 9, 2015. The restaurant features “high-end” food at affordable prices. Everything is art driven – for example – on the breakfast menu is a “Juggernaut” – which consists of 2 (Red) Waffle Sandwiches W/ Fried Chicken, Over Medium Eggs, and Pepperjack Cheese Topped W/ Honey Drizzle. The menu items are centered around comic book themes to provide a casual environment combined with luxury.

“Our food can sometimes seem ‘high end’ based our plating. I wanted to tie in a fun creative food theme and provide a place where people can come in for lunch and dinner without getting dressed up… Make it kid friendly without making it look like a toy store.” – Darnell Ferguson

Ferguson is enjoying success but never forgets where he comes from. He keeps God in everything that he does and gives motivational speeches to young people in his spare time. He often brings kids from the West End of Louisville into the restaurant and gives them a tour because he understands the importance of exposing others to success.

“That’s a huge thing because I get people that come in here all the time that always think I’m the server.” – Darnell Ferguson 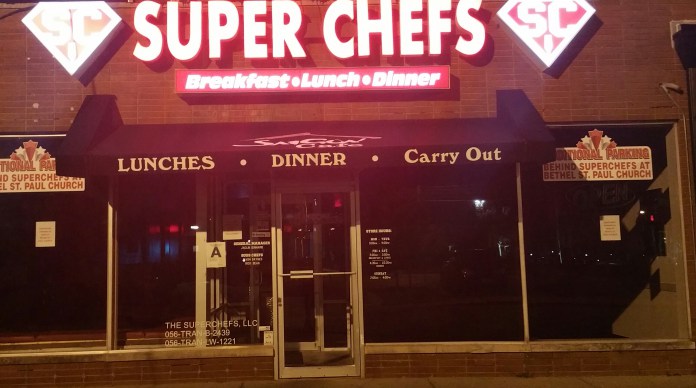 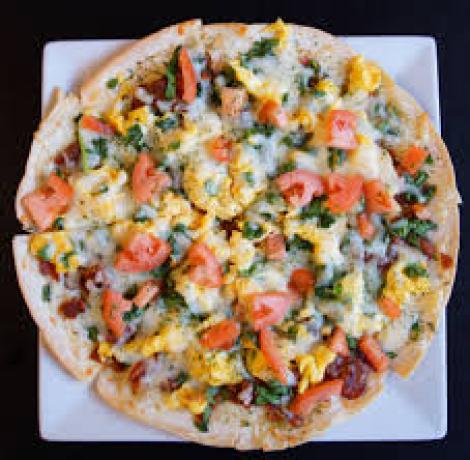 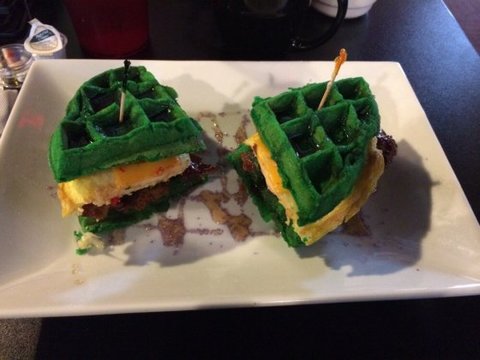 The best foods I have tasted in this world are foods made by African people.

To CFC: Can you implement advance editing tools on here? Auto correct sucks!

Realize we can't mold our offspring into us as much as we want to,they will have to follow their own path at some point. Just keep encouraging the best way you can!

yes..I live in Louisville and its so awesome to see this.

Yes,nice to see some positivity!@ Big Woman
Thanks for listing those programs available in NYC,I'm sure they can help someone out there.

@ Donnette Mathieson
Keep encouraging your son and shower him with love regardless of his past ... all is not lost,good luck!
All are life lessons...

Comment by Big Woman on December 19, 2015 at 6:39pm
This is good news! Nice to see a positive story. God bless him and all the other young folks struggling with a prison record.
There some programs in the NYC area that assist ex-cons: The DOE fund, Wildcat, Binding Together are just a few.
For more info check with community help centers, local elected officials etc. in your respective areas.