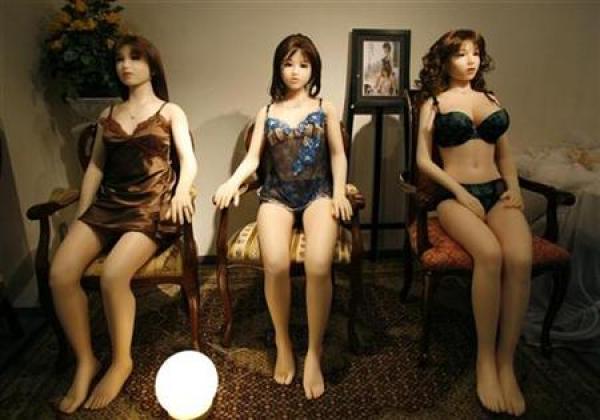 When the 45-year-old, who uses a pseudonym of Ta-Bo, returns home, it's not a wife or girlfriend who await him, but a row of dolls lined up neatly on his sofa.

Each has a name. Ta-Bo often watches television with his toys before bathing them, powdering them so that their skin feels more human, dressing them in lingerie and then taking them to bed.

"A human girl can cheat on you or betray you sometimes, but these dolls never do those thing. They belong to me 100 percent," says the engineer who has spent more than 2 million yen ($16,000) over the past decade on the dolls.

"Sometimes it takes too much time before I can have sex with the person I meet. But with these dolls, it's just a matter of a click of the mouse. With one click, they are delivered to you."

The man, who says he has had sex with five women but prefers the dolls, is one of a gradually increasing, though secretive, group of Japanese men who have given up on women.

A Japanese maker said it started producing its life-sized and anatomically correct dolls 30 years ago, targeting initially handicapped men who might find it difficult to find a partner.

Orient Industry Co. now makes 80 dolls a month in an eastern Tokyo factory to nine designs that sell for between $850 and $5,500 each. The more expensive models are made of silicon and have 35 movable joints.

Nearly all of the people who buy these dolls are single men and about 60 percent of them are over the age of 40, a company official said.

"Nowadays, women are sometimes more dominant than men in the real world, and they don't always pay attention to men," said Hideo Tsuchiya, the company's president.

The anonymity of buying a sex doll over the Internet has helped the business grow but Orient Industry also has a showroom displaying its wares.

Many have parted lips, prominent breasts and are shown splayed across beds or chairs in poses similar to those adopted by prostitutes in sex shops.

Ta-Bo says his parents are not aware of his companions as he has never invited them to his apartment.

He admits that carrying the dolls, changing their clothes and bathing them is almost like nursing bedridden people, but says for him and a few male friends who share his hobby, the dolls are the only emotional outlet.

"Sex with human girls was better, but I hate the process of dating," he said.

Comment by Sufferahsmusic Media Prod on May 21, 2010 at 9:46am
please clik me i need the views thank you

Comment by Tia on May 19, 2010 at 8:06pm
Notice that you don't hear of west indian men doing this foolishness... That's all I'm gonna say...draw your own conclusions.

Comment by nikky on May 19, 2010 at 7:03pm
WELL MY BOY U CAN HAVE A NEW 1 EACH NIGHT' AND DAY AND NONE WILL ANSWER U BACK OR COMPLAIN 'AND U WILL NOT GET ANY SICKNESS BECAUSE U ALREADY SICK HAHAHHAHAHAH