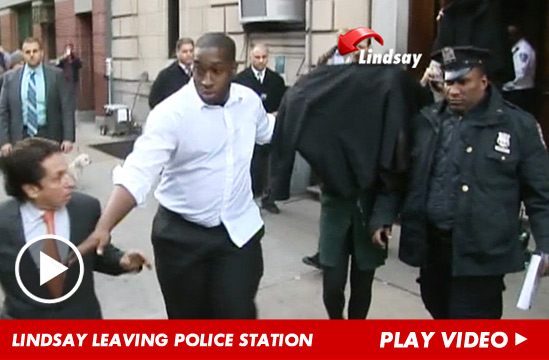 Actress Lindsay Lohan was arrested outside a popular Chelsea nightclub early Thursday and charged with misdemeanor assault after striking a female patron in the face, New York City police said.

The NYPD said Lohan, 26, was arrested outside Avenue, a 10th Avenue hot spot located between West 17th and West 18th streets in Manhattan, by 10th Precinct officers at 4 a.m.

An NYPD spokesman told Newsday Lohan was "involved in some type of dispute" inside Avenue. "She struck another female patron in the face and was arrested a short time later outside the club."

Police characterized the injuries inflicted by Lohan in the alleged incident as "minor."

Lohan, the "Mean Girls" star from Merrick whose most recent starring role as Elizabeth Taylor in the TV movie "Liz & Dick" was labeled a flop after being seen by only 3.5 million viewers earlier on Sunday, was charged with third-degree assault, a misdemeanor, police said. Police said Lohan was released a few hours later, issued a desk appearance ticket.

The incident is the latest in a long string of highly publicized run-ins with the law for Lohan, who in October was involved in a heated "verbal dispute" with her mother, Dina, outside the family home in Merrick. Police at that time confirmed officers responded to a 911 call, placed just after 8 a.m., reporting a domestic incident on Old Mill Road -- but said an investigation determined there was no criminality involved.

Two entertainment websites, TMZ and RadarOnline, reported Dina Lohan scratched her daughter's leg -- and reported LiLo's bracelet was broken in the scuffle, which occurred after the two left a Manhattan club in a limousine.

In an audio recording TMZ had of a phone conversation between Lindsay Lohan and her father, Michael Lohan, while she was in the limousine, the actress says her mother grew angry after LiLo demanded the return of $40,000 she had given her mother to save her home from foreclosure.

Michael Lohan released a statement saying he recorded the conversation after making the 911 call, saying: "I did call the police at Lindsay's request. Lindsay even asked that I record the conversation because she was being held against her will by the limo driver at Dina's instruction."

Hours after the Oct. 10 incident, Lohan and her mother were seen hugging outside the front door of the home.

One day later, the actress said she lied when she said her mother was on cocaine and left a "gash" on her leg during the incident. She told TMZ that, in the heat of the argument, she made up falsehoods about her mother in the phone call to her dad. "Mom does not do cocaine," Lohan told TMZ Live on Oct. 11. "That's a fact. She's an amazing woman."

In September, LiLo and a California man filed harassment claims against each other with the NYPD. Those complaints stemmed from an early morning altercation at a posh Manhattan hotel.

smh. we need to pray for her. thats the only way she will turn her life around.

Comment by Connie on November 30, 2012 at 12:45pm
All I know, I should be working for Lindsay's legal team, she keep them attorneys working, they getting PAID well. Every time Lindsay get in trouble, they probably taking bets on whose turn it is to wear the Armani suit to Court and parade in front of TMZ. LOL

Comment by Bombahdrop on November 30, 2012 at 12:18pm
Her bodyguards seem to Miraculously Pop up all over the cameras when the Sh** Jumps off. She need to get rid of them bodyguards they worthless. Yesss the Liz movie was a total FAIL ! I didn't see the movie and don't want too, but I have seened previews and in my opinion I was not Impressed the way she represented my girl Liz Taylor. Can't this girl find anything fun with her money. She got that Lotto bread that most wish to have so they can have a good,fun life just to be happy and Lindsey is taking what she has for granted. This is why she is having all this bad luck. Now she going to jail. If she ends up in Jail she either going to straighten up or she will come out of Jail much worst then when she went in. You'll know if Lindsey did time in prision because she knows how to send kites through toilet bowls lolz

Comment by Bruce Thorne on November 30, 2012 at 12:10am
Linsay Lohan has some serious issues especially since her Sunday night movie 'Liz and Dick did so poorly.However,a lot of people try to test her in order to push her over the edge and to get their names in the tabloids and on T M Z just to enjoy their 15 minutes of fame.But she is really a mess,if its not drugs its car accidents or stealing jewellery and since she is on probation this latest spat with the law could land her in Jail.But she must have been stressed out over the negative reviews from her recent movie.Nevertheless she has to be able to control he self.And Tall Island Girl u are right where were her body guards when she needs them, they should be fired because obviously they are not doing their job.