Lil Wayne is not allowed to consume one single drop of alcohol for the next three years of his life -- this according to probation documents obtained by TMZ.

The documents -- which became effective today -- clearly state that Wayne "may not consume or drink any substance containing alcohol" as long as he's on probation ... for the next 36 months.

Wayne is also prohibited from knowingly associating with any person engaged in criminal activity or any person with a criminal record without prior written approval from the probation department.

He's also required to submit to drug and alcohol testing, per the probation dept.

If Wayne violates any of the terms of his probation -- he could be sent to prison to serve out the remainder of his term. 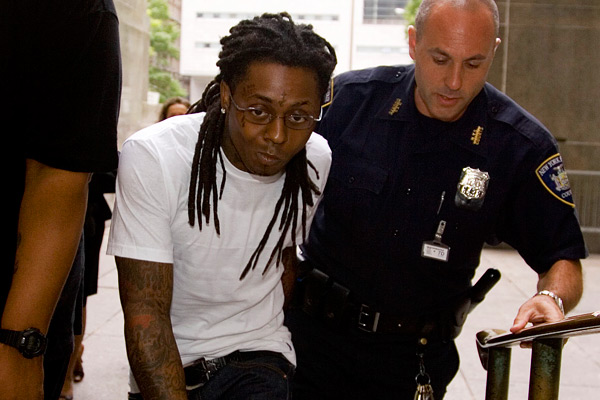 NEW YORK -- Lil Wayne was released from the Rikers Island prison facility after serving eight months of a year-long sentence for attempted gun possession. Though a guard told MTV News early Thursday morning that he had to wait another day due to "miscalculated" time, at 8:35 a.m. a spokesperson at Rikers confirmed that Wayne had been discharged.

In March, Lil Wayne turned himself in to New York authorities after he struck a plea deal in his case stemming from a 2007 gun arrest near the Beacon Theatre in Manhattan.

The rapper and his entourage were leaving his first headline performance in the Big Apple when police pulled over his tour bus. The New York Police Department alleged that the odor of marijuana was coming from the vehicle and later searched the bus. Authorities discovered drugs and a gun, registered in Wayne's manager's name, near the rapper.

Comment by Kim Wilson on November 8, 2010 at 12:07am
This will test his mettle, both as an artist and as a man. Question is can he as effective in his ability to entertain if he is not indulging in excess...I hope he can. He has to prove it all to himself, we are just going to be witnesses if he's the lyrical LeBron without the purple haze......be a better role model Wayne for you and your brood.

Comment by Theresa Kemp on November 7, 2010 at 8:11am
My brother just get ur act together and stay out of jail.Keep focus more on ur Music and less focus on jail.

Comment by Big Shot... on November 7, 2010 at 6:27am
I think that time may have done Wayne well. I bet hes "now" gonna be a much better, more focused MC. Hes grown a whole lot in the last few years, I think hes really gonna be a beast now. He needed time away from his retarded azz drug/junkie "pimp" baby. But I bet that boy Wayne didnt spend 1hr sober once he got outta there and outta sight, lol. I hate for anyone to be wrapped into this crooked system but in this case Im sure its done him well, may have even saved his life. He did need a break from his abuses of drugs and alcohol...

Comment by Bronxbootylicious on November 7, 2010 at 4:15am
My baby is home!!! Being forced to not indulge is going to put him in spit fire mode. We have not experienced what we will see from this young man over the next 3 years. Lyrically, he is going to be a beast. Isn't that what the government makes you with the manipulating ways. They the government have created a monster, so now. He's going to publicly annihilate them lyrically. He will be able to speak about his thoughts on our justice system and society and how its created a lyrical monster. He will get through it and live another day. This is an intelligent young man. Mark my words!!!
Also, he must be very careful of the manipulation of our government. You see what they doing to TI. They don't want no Black man with moneys saying what they want because they have money. Be careful baby, but crush they ass!!!! Your biggest fan, since your fist single!!!

Comment by Audrey Morgan on November 6, 2010 at 4:38pm
Are you or someone you know behind on your mortgage payment and don't know what to do? Do not lose your house to foreclosure. Visit www.DistressedHomeownersResources.com to learn about your options.

Comment by Audrey Morgan on November 6, 2010 at 4:23pm
Do not tie your financial future only to your JOB (just over broke). Create your own pension and financial security by starting your own home based business today. For a low start up cost of $299.00 (includes products) you can be in business for yourself with world class training and support. Excellent compensation plan. Visit www.ardysslife.com/shapers4u for more information.

Comment by Kim Wilson on November 5, 2010 at 12:12am
After Halloween, the election results, and granny sling-a-lot, this is not news. But he is out and that is good news...one less male statistic in the system.