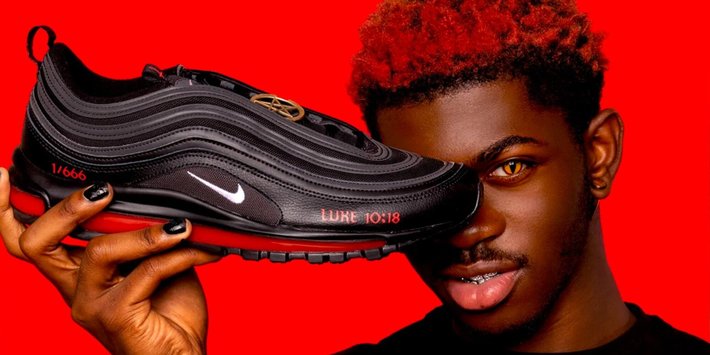 The rapper collaborated with the streetwear company MSCHF on the “Satan Shoes,” only 666 pairs of which were released on Monday for $1,018 a pop. According to PEOPLE, they sold out in less than a minute.
Per Yahoo, the controversial kicks are modified Nike Air Max 97s, and reference Luke 10:18, a Bible verse about Satan’s fall from heaven. The human blood in the sole was drawn from members of the MSCHF team.

Nike was quick to distance itself from the shoes, noting in a statement “We do not have a relationship with Little Nas X or MSCHF,” the company said. “Nike did not design or release these shoes and we do not endorse them.”
The company is now suing MSCHF over the custom sneakers.

“Nike has not and does not approve or authorize MSCHF’s customized Satan Shoes. Moreover, MSCHF and its unauthorized Satan Shoes are likely to cause confusion and dilution and create an erroneous association between MSCHF’s products and Nike. In fact, there is already evidence of significant confusion and dilution occurring in the marketplace, including calls to boycott Nike in response to the launch of MSCHF’s Satan Shoes based on the mistaken belief that Nike has authorized or approved this product.”

The shoes follow the release of Nas X’s controversial new music “Montero (Call Me by Your Name)”, which sees the rapper riding a stripper pole to hell and twerking for Satan.

In an interview with Complex on Monday, Lil Nas X said the Satan Shoes were “already kind of in the works” following the “Jesus Shoes” MSCHF released in 2019.

“With my song and my video, it was the perfect matchup,” the rapper said “Some people are gonna be mad or whatever. People already demonize who I am. So you know what? I’ll take that. I’ll be that and I’m gonna make the best of it.”

Comment by vaughn mitchell on March 30, 2021 at 5:28pm
Oh, little battyman, us going to be paying back slot of money, Nike, is getting raked for this. This stupid Negro, these youth today are just messed up in the head. I wish my kid, would buy that crap, he would have to move out.