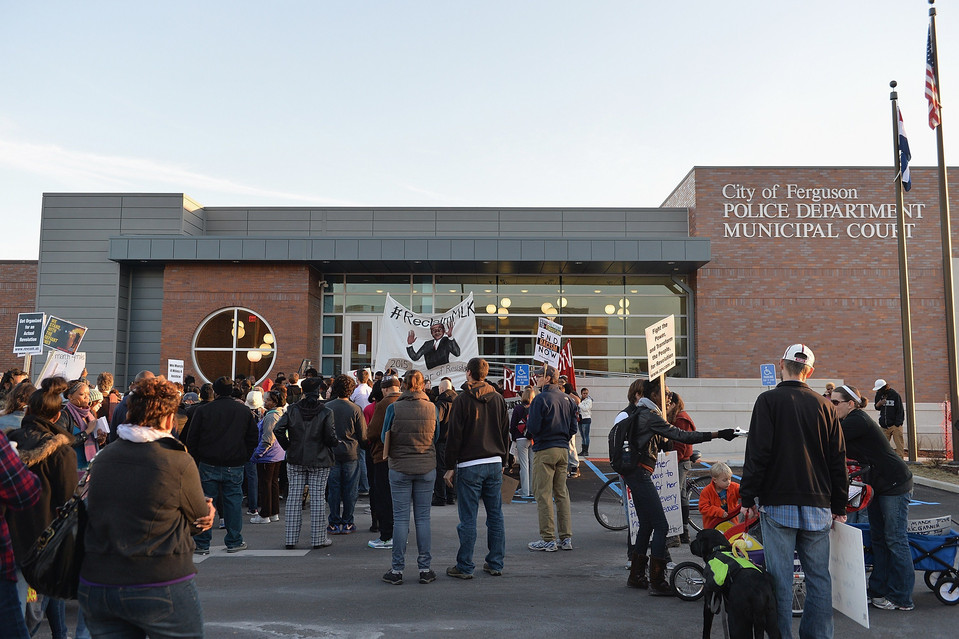 ENLARGE Protestors outside the Ferguson Police Department in Ferguson, Mo., demonstrate against racism in a “Reclaim MLK” march on Jan. 19. Photo: Agence France-Presse/Getty Images
Nearly a dozen residents of Ferguson, Mo., filed a lawsuit in federal court Sunday alleging the city racked by recent racial unrest violates constitutional protections by jailing people in unsanitary conditions for an inability to pay outstanding fines on misdemeanors.The suit, and a similar one filed against nearby Jennings, Mo., alleges the St. Louis suburbs jail people solely for the inability to pay fines and fees on offenses like traffic tickets and other minor offenses. The suits also allege that once jailed, people face crowded and “inhumane” conditions with guards who demean the prisoners in conditions lacking sanitary provisions.

“The City’s modern debtors’ prison scheme has been increasingly profitable to the City of Ferguson, earning it millions of dollars over the past several years,” the suit alleges. “It has also devastated the City’s poor, trapping them for years in a cycle of increased fees, debts, extortion, and cruel jailings.”

The lawsuits, which seek class action status, were filed Sunday in the United States District Court for the Eastern District of Missouri by lawyers from Equal Justice Under Law and ArchCity Defenders, two advocacy groups that often provide pro bono legal assistance with a mission to assist indigent clients. Lawyers from the St. Louis University School of Law also brought the suit.

“The City disputes any contention that individuals in any specific economic group were targeted for unfair treatment, that jail detainees are abused in any way, that persons are routinely confined in custody longer than three consecutive days, or that the physical conditions in the Jail were unsanitary or unconstitutionally improper,” according to a statement from officials in the City of Ferguson.