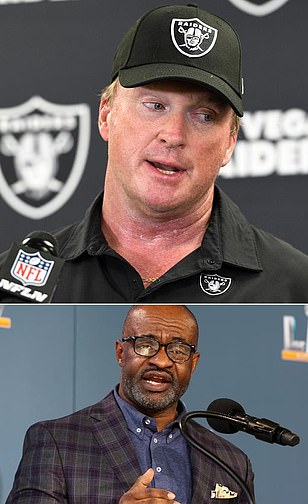 Jon Gruden has resigned as coach of the Las Vegas Raiders after his emails leak revealing his sexist comments about women referees, his homophobic comments about the drafting of a gay player and racist comments.

Gruden, 58, who was in the fourth year of a 10-year, $100 million contract with the Raiders, released a statement Monday night, saying: 'I have resigned as head coach of the Las Vegas Raiders.

'I love the Raiders and do not want to be a distraction. Thank you to all the players, coaches, staff, and fans of Raider Nation. I´m sorry, I never meant to hurt anyone,' said Gruden, who signed with the Raiders in 2018.

He stepped down after The New York Times reported that Gruden frequently used misogynistic and homophobic language directed at Commissioner Roger Goodell and others in the NFL. 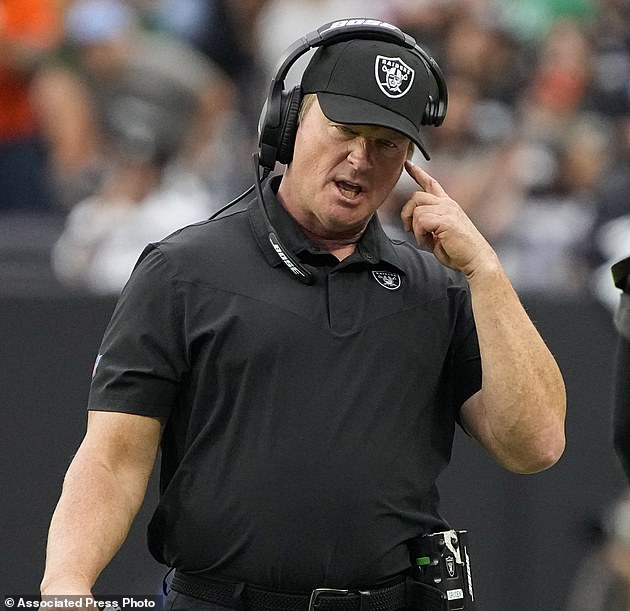 Las Vegas Raiders head coach Jon Gruden speaks on his headset during the first half of an NFL football game against the Chicago Bears, Sunday, Oct. 10, 2021, in Las Vegas. He resigned as the 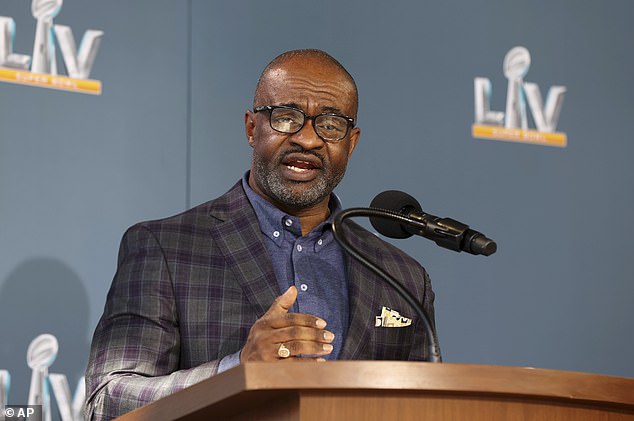 The controversy against Raider's coach Jon Gruden started on Friday when the Wall Street Journal reported that Gruden wrote in a 2011 email to former Washington executive Bruce Allen that NFL union chief DeMaurice Smith (pictured), who he called 'Dumboriss Smith,' had 'lips the size of Michelin tires'

A person familiar with the decision said special teams and assistant head coach Rich Bisaccia will take over on an interim basis. The person spoke on condition of anonymity because the decision hadn't been announced.

It was a rapid downfall for Gruden, who is in the fourth year of a 10-year, $100 million contract he signed with the Raiders in 2018. It started on Friday when the Wall Street Journal reported that Gruden used a racist term to describe NFL union chief DeMaurice Smith in a 2011 email to former Washington executive Bruce Allen.

The emails were discovered in a workplace misconduct investigation into the Washington Football Team but ended up costing Gruden his job when they also showed Gruden denounced the drafting of a gay player and the tolerance of players protesting during the playing of the national anthem among other issues.

Gruden apologized for his 'insensitive remarks' about Smith, saying they were made out of frustration over the 2011 lockout. But the latest emails sent from between 2011-18 when Gruden was an analyst for ESPN show his use of derogatory language went well beyond that.

A league source confirms the accuracy of the emails and said they were sent to the Raiders last week. The person spoke on condition of anonymity because the league hasn´t made the emails public.

Raiders owner Mark Davis said last week that the email about Smith was 'disturbing and not what the Raiders stand for' and said the team was reviewing the additional emails. Davis issued a statement Monday saying only that he accepted Gruden's resignation. 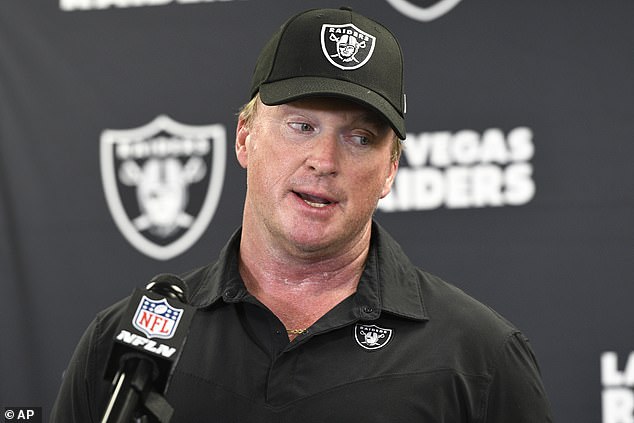 Gruden, 58, who was in the fourth year of a 10-year, $100 million contract with the Raiders, released a statement Monday night, saying: 'I have resigned as head coach of the Las Vegas Raiders

'I'm not a racist' Gruden gives first comment since controversy

The Times reported that Gruden used a gay slur to insult Goodell and said he was 'clueless' and 'anti-football.' He also said Goodell shouldn´t have pressured the Rams to draft 'queers,' a reference to Michael Sam, who was the first openly gay player drafted by an NFL team.

Raiders defensive end Carl Nassib came out as gay in June and is the first openly gay player to appear in an NFL game.

In a 2017 email, the Times said Gruden responded to a sexist meme of a female official by saying: 'Nice job roger.'

The paper also said Gruden criticized Goodell and the NFL league for trying to reduce concussions, and said that Eric Reid, a player who had demonstrated during the playing of the national anthem, should be fired.

The newspaper said Gruden also mocked an article in 2017 about players calling on Goodell to support their efforts promoting racial equality and criminal justice reform.

'He needs to hide in his concussion protocol tent,' Gruden wrote.

Gruden and Allen have a long relationship, having worked together in Oakland and Tampa Bay. The emails between the two and other men included photos of women wearing only bikini bottoms, including one photo of two Washington team cheerleaders.

Smith said earlier Monday that he appreciates that Gruden reached out to him following the initial report, but that the email is evidence that the fight against racism is ongoing.

'But make no mistake, the news is not about what is said in our private conversation, but what else is said by people who never thought they would be exposed and how they are going to be held to account,' Smith wrote in a Twitter thread. 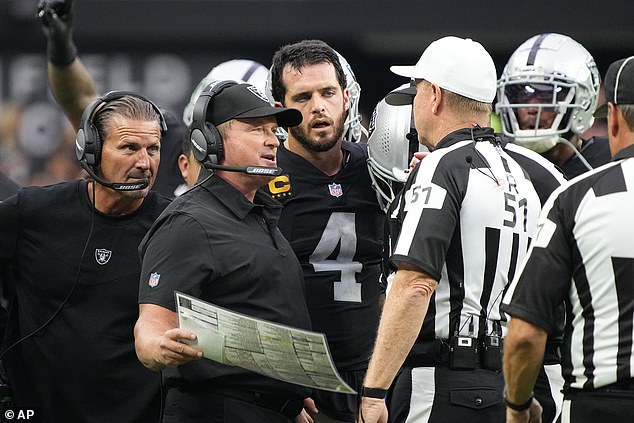 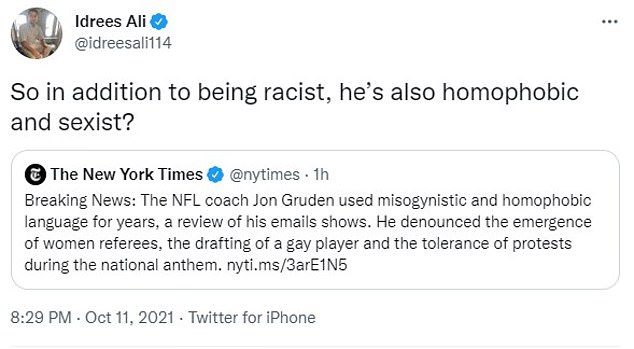 Gruden´s comments to Allen about Smith came during the 2011 lockout of the players by the NFL. Gruden told the Wall Street Journal he was angry about the lockout during labor negotiations and he didn´t trust the direction the union was taking.

'Dum­b­oriss Smith has lips the size of michellin tires,' Gruden wrote in the email re­viewed by the newspaper.

Davis had been trying to hire Gruden almost since he took charge following the death of his father, Al, in 2011. He finally got his prize in 2018 when Gruden agreed to leave ESPN and return to the sideline with a 10-year contract. Gruden had revived the Raiders in is first stint in 1998-2001 and then beat them in the Super Bowl the following season after he was traded to Tampa Bay for a boatload of draft picks.

Gruden has a 117-112 career record but hasn´t won a playoff game since the Super Bowl victory over the Raiders in the 2002 season.

His second tenure with the team started with a pep rally introductory news conference but provided few reasons for celebration as Gruden had a 22-31 record, failing to reach a winning record or make the playoffs.

He traded away stars Khalil Mack and Amari Cooper in his first season to start a rebuild, which has showed only minor progress. After the Raiders went 4-12 in his first season, Gruden tried to make a push in 2019 in the team´s final season in Oakland by spending heavily in free agency and trading for star receiver Antonio Brown. But Brown was cut before the season after a series of run-ins with management, and the Raiders went 7-9.

They improved to 8-8 last season and got off to a promising 3-0 start this year before losing the past two games.

Bisaccia has been a special teams coordinator in the NFL for 19 seasons with the Raiders, Chargers, Dallas and Tampa Bay. He has no head coaching experience but his elevation will allow other assistants like defensive coordinator Gus Bradley to stay in their current roles.