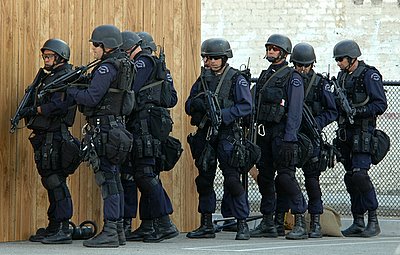 A former SWAT sergeant with the LAPD is suing the department alleging that veteran cops encourage the use of deadly force and retaliate against anyone who calls out the misconduct.

Sgt. Tim Colomey, who spent 11 years as a SWAT supervisor until last November, claims in the suit filed on Tuesday that a group of officers dubbed the SWAT Mafia “glamorize the use of lethal force.” The legal docs also allege they control the unit’s membership and  “direct the promotions of officers who share the same values while maligning the reputations of officers who do not,” the lawsuit says, per Fox News.

The group allegedly threatens officers they consider  “enemies” for speaking out against its use of lethal force.

“SWAT officers who have chosen not to use lethal force in suspect encounters, and who have instead sought to deescalate conflicts, have been ostracized and labeled ‘cowards’ by the SWAT Mafia. These officers will never succeed or promote within SWAT,” the lawsuit says, according to the Los Angeles Times.

“The SWAT Mafia’s control over SWAT has resulted in a deplorable binary choice for officers and supervisors within SWAT: Either adopt the SWAT Mafia’s aggressive ways and kowtow to them, and thereby flourish within the unit, or reject the SWAT Mafia’s culture of violence and stand up to its nepotism, and thereafter be pushed out of the unit,” the lawsuit continues. “As set forth below, Plaintiff chose the latter, and was forced out of SWAT for doing so.”

Colomey joined the LAPD in 1995 but left in 2019 after SWAT unit members retaliated against him for speaking out. The lawsuit reportedly does not cite specific examples of deadly or excessive force by the unit.

Meanwhile, several officers of the SWAT unit, known as “D Platoon,” are under investigation over alleged indecent behavior.

The lawsuit says commanders “are aware of the serious and systemic problems that are linked to the SWAT Mafia’s power, but they have all turned a blind eye to these problems.”