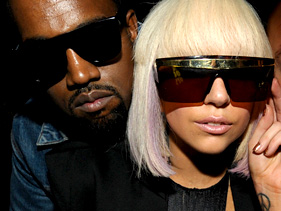 NEW YORK — Lady Gaga and Kanye West shocked fans on Thursday when they announced they'd be canceling their much-anticipated Fame Kills tour without explanation.
But on Friday at an event in New York City, Gaga, who didn't get into specifics about the cancellation, did say that West would be taking some time off and she would be hitting the road on her own.

"Well, actually, it was a mutual decision to cancel the tour," she told MTV News on the red carpet for the Billboard Women in Music event. "But I'm not taking any time off, so I'll be leaving just a week later than I was supposed to on my own solo tour. It will be the same places. So I will see you guys there. I'm putting out my re-release as well — The Fame Monster on November 24."

She added that an announcement about who will be joining her on this new trek will be made soon. As for the look of the tour, she told reporters she'd be starting from scratch.

"In respects to the creative work that [Kanye and I] did together, I won't be doing any of the things that we designed for the tour," she explained. "It will be entirely new, and it will be just as amazing and memorable and epic."

Responding to 50 Cent's recent disparaging comments calling the co-headlining trek "the gay tour," Gaga said, "I think it's sad — and I think that nobody in any genre of music should accommodate homophobia."