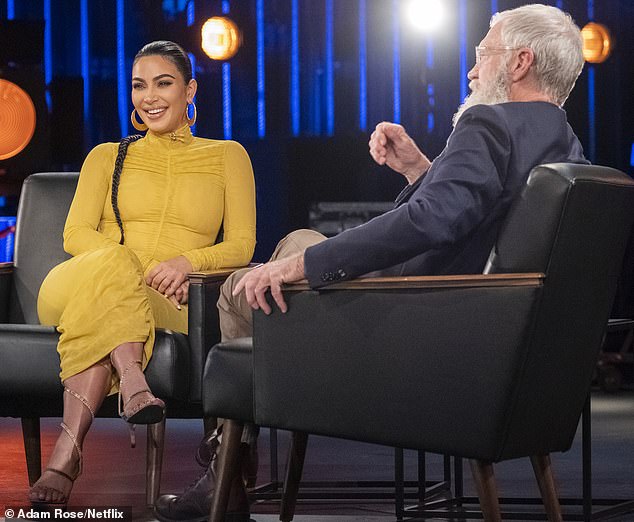 Kim Kardashian says people warned her not to step foot in the White House because she would ruin her reputation as she stands by working with President Donald Trump on prison reform.
The 39-year-old was grilled by David Letterman about working with Trump for the first episode of his Netflix series My Next Guest Needs No Introduction that will air on Wednesday.
In the wide-ranging interview, Kardashian refused to say anything negative about Trump even as Letterman repeatedly questioned her on politics.

The mother-of-four said it was worth going against the advice of family and friends to work with Trump on criminal justice reform.
Her advocacy pushed Trump to commute the life sentence of Alice Johnson who had spent more than two decades serving life without parole for a nonviolent drug offense.

It resulted in her meeting Trump in the Oval Office in a widely publicized visit back in 2018.

'Trust me, everyone called me and said, 'Don't you dare step foot in that White House or your reputation is done.' And I said, 'I have to step foot in there or these people's lives don't have a chance',' Kardashian told Letterman in the yet-to-air interview, according to the Daily Beast.

'Hopefully, for the next multiple administrations, I'll be working with the White House, helping them with clemencies.'

He continued: 'But do you feel that what is being done on behalf of sentencing reform now via this current administration in any way allows the balance of democracy back in a corridor of viability?' 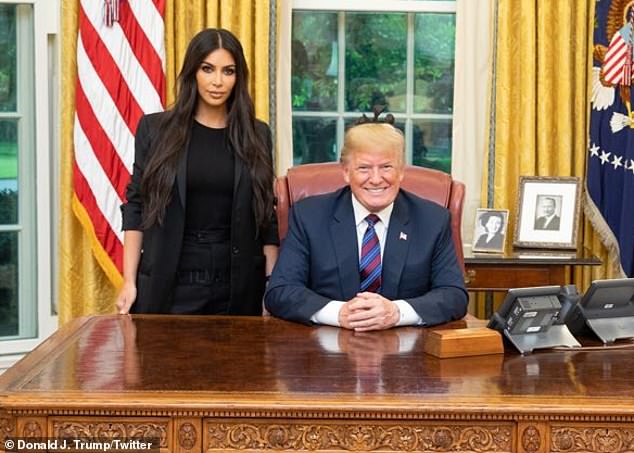 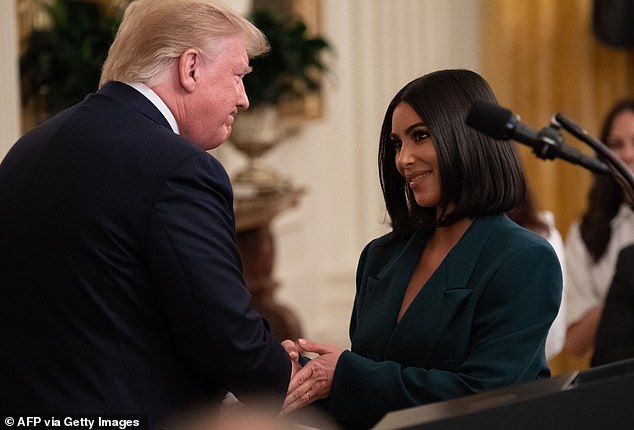 The mother-of-four said it was worth going against the advice of family and friends to work with Trump on criminal justice reform. The pair are pictured at the White House in June 2019

The TV star, who is currently studying to become a lawyer in California and has made subsequent visits to the White House, went on to say: 'Well, I have no idea what you just said.'

'I'm grateful for what you're doing, but it doesn't make me feel any better about the current administration,' Letterman said, prompting Kardashian to say: 'I understand that'.

Despite being repeatedly grilled on her relationship with Trump, Kardashian would only say that she is 'extremely grateful' for the work of the Trump administration regarding criminal justice reform.

She added that she was determined to 'stay focused' on her goals.

Elsewhere in the interview, Karadashian refused to say who she was voting for.

'I know who I'm voting for,' she said without elaborating further.

The interview was filmed early this year prior to the Covid-19 pandemic and well before Joe Biden was confirmed as the Democratic candidate. 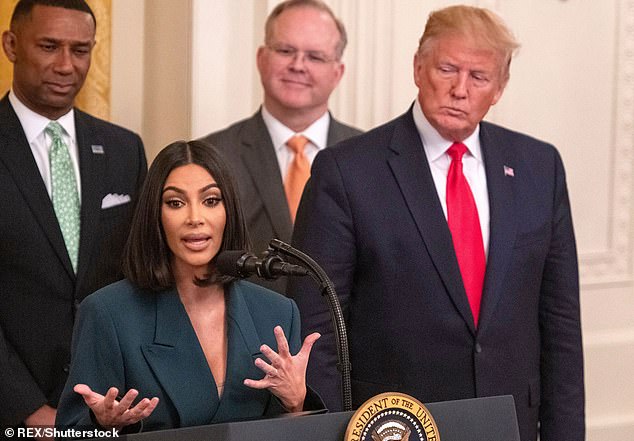 Despite being repeatedly grilled on her relationship with Trump by Letterman, Kardashian would only say that she is 'extremely grateful' for the work of the Trump administration regarding criminal justice reform. They are pictured in 2019

It was also filmed before her husband, Kanye West, announced his presidential bid.

In the 2016 election, Kim has previously said she voted for Hillary Clinton.

Kardashian has previously said she has no regrets about working with Trump and that she has developed a good relationship with the White House. F

First Daughter Ivanka Trump and her husband Jared Kushner were responsible for setting up Kardashian's initial meeting with Trump.

She has previously said she knew exactly what she was getting into and that it didn't make sense to her when she was advised not to meet the President.

'I was like, if someone can get out of prison and get their life back versus my reputation of going to the White House - when there is only one person on this planet that can make the decision and that would be the president - and that was even a question for the media, that just absolutely didn't make sense to me,' Kardashian said last year.

Reputation ruined by showing up in the WHITE HOUSE!?!? WHAT......this chick got a whole sex tape out! Give me a break. That whole family if trash!