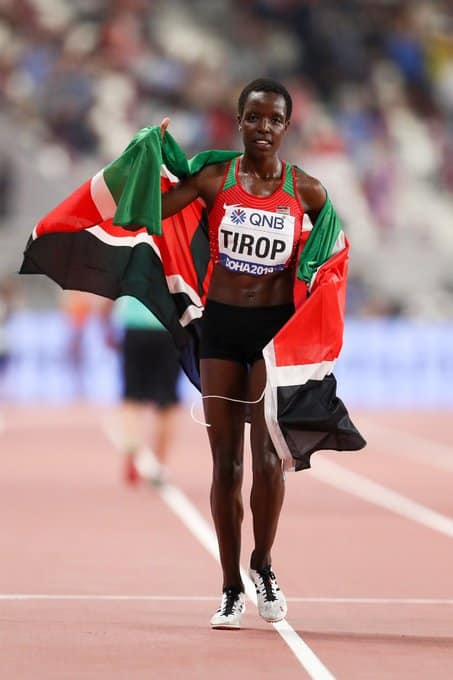 Kenyan long-distance runner Agnes Tirop, who finished 4th at the Tokyo Olympics, has died at age 25. The athlete was found stabbed to death in her home, according to a Kenyan athletic commission.

Tirop was “allegedly stabbed” at her home in Iten, Kenya, and her husband is said to be the prime suspect in the killing. Tirop suffered stab wounds to her neck and abdomen, according to TMZ.

According to reports, Agnes’ husband hasn’t been seen since her death. Athletics Kenya said it was “still working to unearth more details surrounding her demise.”

The 25-year-old won bronze medals in the 10,000m at the 2017 and 2019 World Championships and finished 4th in the 5,000m at the Tokyo Games. Last month, Tirop made history by taking 28 seconds off the long-standing, women-only world record for 10km at the Adizero Road To Records event in Germany. Tirop finished in a time of 30:01, breaking the previous record of 30:29, which had been set by Moroccan Asmae Leghzaoui in 2002.

Following the race, she said, “I’m so happy to have broken the world record. I felt the pace was good. The course was very good, too.”

The BBC reports Agnes’ father called police Tuesday after he could not reach his daughter. When the cops arrived at her home, Agnes was found in bed in a pool of blood.

“Athletics Kenya are distraught to learn about the untimely death of World 10,000m bronze medallist Agnes Tirop,” the country’s athletics body said in a statement.

As reported by CNN, Kenyan President Uhuru Kenyatta paid tribute, saying in a statement: “It is unsettling, utterly unfortunate and very sad that we’ve lost a young and promising athlete who, at a young age of 25 years, she had brought our country so much glory through her exploits on the global athletics stage including in this year’s 2020 Tokyo Olympics where she was part of the Kenyan team in Japan.”

Sportswear giant Adidas also weighed in on the tragic loss.

“The Adidas family is deeply saddened by the tragic news about Agnes Jebet Tirop. Agnes was an incredible person, a record-breaking athlete and a beloved member of our family. She will be greatly missed by us all and her legacy will forever live on in our memory,” the sportswear giant tweeted.

Professional sports have many risks. I think that athletes do it with open eyes. And I did not dare to become a professional athlete at the time. I turned down an athletic scholarship. Now I'm just a fan and can only use the Vivatbet promo code to bet. I do not regret my choice. This gave me less risk, a great hobby, and a way to make money online.

These men need to learn to let go and let live.  She is dead, and he will be a living dead in jail for the rest of his life, if they don't give him the death penalty.

I regularly visit your website and find a lot of interesting information. There are not only good articles but also great comments. Thank you and hope my page grows bigger and bigger

Comment by vaughn mitchell on October 15, 2021 at 10:24am
Domestic violence against women is a b****, I hope they hang him by his nuts, with some Gators under him.

<a href="https://thebeupdated.com/husqvarna-vitpilen-401/">i really liked this article</a> it has so many things to learn. Many thanks, I appreciate this

<a href="https://thebeupdated.com/husqvarna-svartpilen-401/">i really liked this article</a> it has so many things to learn. Many thanks, I appreciate this