It went down yesterday, but in case you missed it, for the record, Kentucky Attorney General Daniel Cameron says his office determined that two of the three officers who fired their weapons were justified when they fatally shot Breonna Taylor.
Officer Myles Cosgrove and Sgt. Jonathan Mattingly were returning fire and within their rights to defend themselves, according to Cameron, who spoke in Frankfort Wednesday afternoon at the Kentucky History Center shortly after a grand jury announced it was charging only one of the officers involved in Taylor’s death.
The grand jury indicted former Louisville Metro Police officer Brett Hankison on three counts of wanton endangerment, all connected to Hankison firing his gun and endangering Taylor’s neighbors. None of the counts are for firing into Taylor’s apartment, or directly linked to her death.

Check out Cameron’s comments below.

In response to Cameron’s announcement, Black Lives Matter co-founder Alicia Garza suggested on Wednesday that the Kentucky Attorney General is coming off like a notorious segregationist and racist from the civil rights era.

Garza’s comments came on MSNBC’s “The ReidOut” after Cameron spoke about the grand jury’s decision to indict one of the police officers involved in Breonna Taylor’s death on three counts of wanton endangerment.

“I think what I saw this morning was a Bull Connor speech in 2020,” she said, referring to the former Alabama politician. “And you’re right,” she told MSNBC host Joy Reid, “unfortunately, it was being given by a Black prosecutor.”

Comment by vaughn mitchell on October 1, 2020 at 11:05pm
Damn coons, and sellout, look at him showing his teeth. 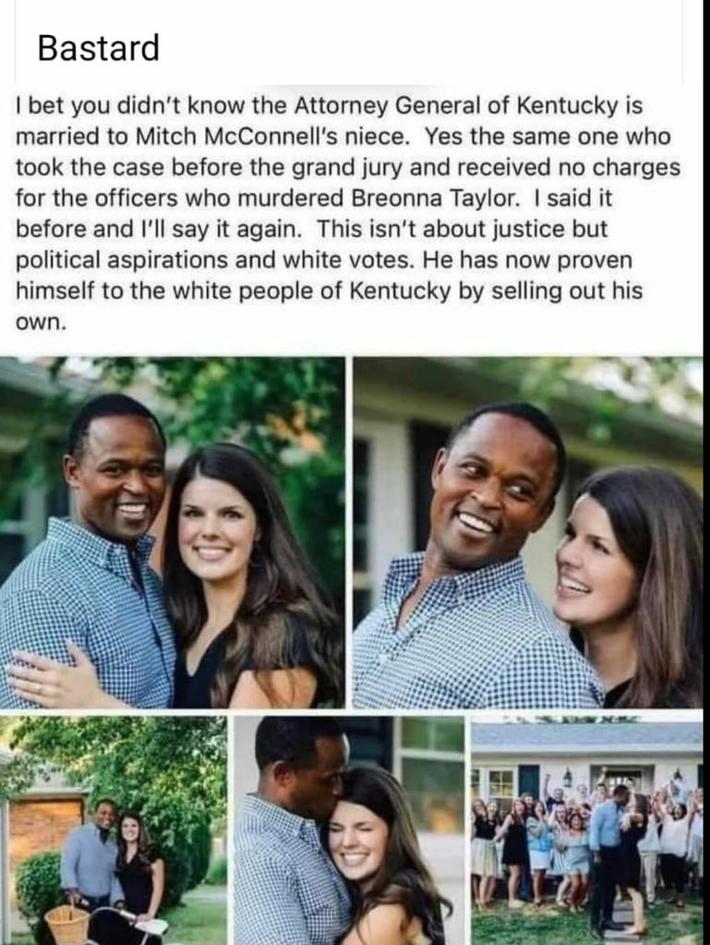