Kate Smith, a popular Depression-era American singer, is most famous for her version of “God Bless America.” The song is played often at sporting events, including national and professional leagues and teams.

Not anymore. At least for the Philadelphia Flyers and the New York Yankees.

In reports and statements, both teams have said that having recently learned about Smith’s history of racist songs, she’s been dumped.

Smith, who died in 1986, was awarded the Presidential Medal of Freedom in 1982 by then-Pres. Ronald Reagan.

1. Originally Written in 1918 & Revised For Smith in 1938, ‘God Bless America,’ the Irving Berlin Anthem & ‘Solemn Prayer,’ is Revered & is Smith’s Signature Song. But Far From Her Only Famous Song

Smith first sang the song in 1938 on Armistice Day. Composer and songwriter Irving Berlin first wrote a version of the song in 1918. He’d two decades later revise it and, as Kate Smith said, wrote it for her to sing.

“…a song that’s never been sung before by anybody …one that was written especially for me …a song that will never die,” Smith says before the performance on Nov. 10, 1938.

Rarely ever heard, Berlin, a Russian-born Jew who immigrated to the U.S. when he was 5, wrote an spoken-word introduction to his song. Smith included the introduction in her radio show performance.

“While the storm clouds gather far across the sea / Let us swear allegiance to a land that’s free / Let us all be grateful for a land so fair, / As we raise our voices in a solemn prayer.”

‘God Bless America’ is the standard-bearer for popular patriotic anthems and has been sung for 80 years at countless public events, most notably, sporting events.

2. The Philadelphia Flyers’ Had a Memorial Statute of Kate Smith Erected at its Stadium. Smith Herself Sang the Song at Flyers Games. Now, the Smith Version Will No Longer be Played & the Statute Covered 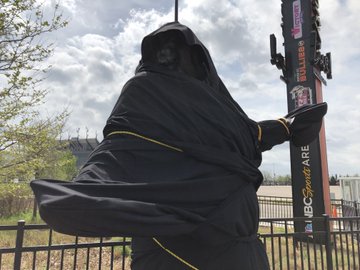 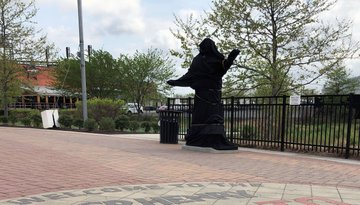 #Breaking: The statue of Kate Smith outside Xfinity Live! is now draped in black amid allegations of racism connected to the Flyers singer. http://on.nbc10.com/pLl68Ed

Decades before the terror attacks of 9/11, Smith’s version of the song was often heard played at NHL and MLB games. The Philadelphia Flyers in particular were huge fans of the song and Smith, so much so they erected a memorial statue of the singer at the stadium.

And, Smith on occasion even sang ‘God Bless America’ for the Flyers’ home games, most notably at the 1974 Stanley Cup game.

The New York Yankees are another example of a sports team that has long used the Smith version at home games, especially after September 11, 2001.

But no more because of Smith’s history of racist songs, which many will find offensive.

3. The Song Deemed Racist, ‘Pickaninny Heaven,’ Was Sung by Smith at an Orphanage for Black Children in 1933

“And now folks, I’m gonna sing this next song for a lot a little colored children listening in an orphanage in New York City. Here ya are, kids.”

“Great big watermelons” and “pork chops right outside your door,” with a “Suwanee River made of real lemonade,” in the heaven that’s made just for “pickaninnies.”

She sings to the orphans, “…though the good lord took your mammy, she’ll be waiting there for ya.”

4. ‘That’s Why Darkies Were Born,’ is Another of Smith’s Songs With Racist Lyrics & Images & Smith’s ‘Mammy Doll’ Too is Considered a Racist Symbol

Kate Smith recorded “That’s Why Darkies Were Born,” in 1931 and it was among her biggest records. The lyrics include specific racist language and racial stereotypes. Some argue that the song is an homage, in part, to the “spirit” of African-Americans and point to his lyric: “sing when you’re weary and Sing when you’re blue, Sing, sing, that’s what you taught, All the white folks to do…” And claim that since singer, actor and activist Paul Robeson also recorded her song, it was not racist.

But the song begins with the statement that black people were born to be saves and to sing.

Someone had to laugh at trouble,
Though he was tired and worn,
Had to be contented with any old thing,
That’s why darkies were born;

Someone had to fight the Devil,
Shout about Gabriel’s Horn,
Someone had to stoke the train
That would bring God’s children to green pastures,
That’s why darkies were born.”

In ‘Envisioning the American Dream,’ racist stereotypes in American popular culture are explored. One is Kate Smith’s “Mammy Doll,” as seen in this comic from the 1940s.

Kate Smith was born in Greenville, Virginia in 1907. Her father was a periodical distributor. She grew up in Washington D.C. and never took a singing lesson. Her decades long career included more than 3,000 recordings with most during the Great Depression, she sang for troops in WWI as a very young child and later as adult for troops in WWII. Smith never married and is reported to have earned more than $30 million in her lifetime. She died in 1986 after suffering from debilitating diabetes which claimed a leg and led to brain damage following a diabetic coma.

Smith was award the Presidential Medal of Freedom bestowed by Reagan, who said in part, that Smith’s singing of ‘God Bless America’ is a “reminder of the beauty, the courage and the heart of this great land of ours. In giving us a magnificent, selfless talent like Kate Smith, God has truly blessed America.”

This post has been updated to correct that Smith performed ‘That’s Why Darkies Were Born’ but did not author it; Ray Henderson and Lew Brown are the songwriters.

Comment by mr1stroke on April 22, 2019 at 5:06pm
Lol so Negros just recognize those songs are racists after all those years they have been repeating those same words, no wonder thiae dumb niggers strongly support the NFL damn idiots, stuck licking white peoples ass, do like the Jews gain some power