Kim Kardashian hopped on Twitter to address the leaked video of the phone call with Kanye West.

Four years ago, the couple released a clip of Ye's call with Taylor, but somebody from the camp leaked the unedited footage, which appears to tell a completely different story.

After the full version leaked, Taylor responded by saying, "Instead of answering those who are asking how I feel about the video footage that leaked, proving that I was telling the truth the whole time about *that call* (you know, the one that was illegally recorded, that somebody edited and manipulated in order to frame me and put me, my family, and fans through hell for 4 years)… SWIPE UP to see what really matters."

“Instead of answering those who are asking how I feel about the video footage that leaked, proving that I was telling the truth the whole time, [...] please join me in donating during this crisis.”

1,722 people are talking about this

Check out the full video footage below.

And Kim, who is fiercely protective of both husband Kanye and her reputation, hopped on Twitter to directly address the newly leaked video, slamming Taylor for leaking it at such a difficult time in the world.

.@KimKardashian slams Taylor Swift after she spoke out about her leaked phone call with Kanye:

“I feel I’m left without a choice but to respond because she is actually lying.” 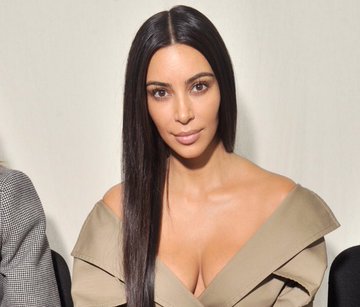 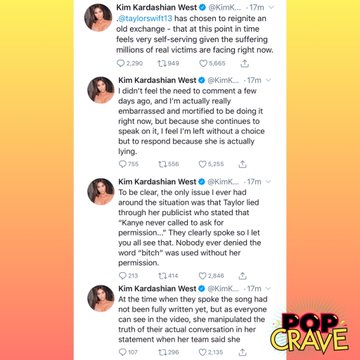 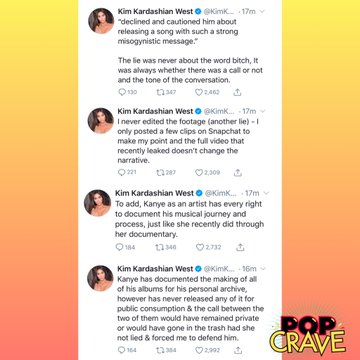 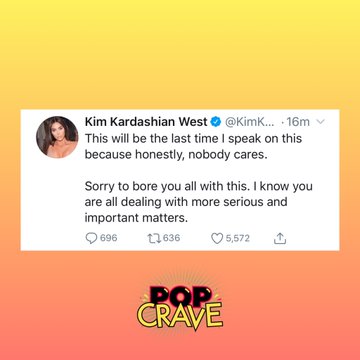 2,212 people are talking about this

Remember when Kanye West & Taylor Swift had beef, over the lyrics to Kanye's 2016 song Famous.

In the song, Kanye West raps that Taylor Swift "owes him sex." He also calls Taylor a "b*tch" and says, "I made that b*tch famous."

When Famous was released, the lyrics was heavily criticized by media outlets. But Kanye defended calling Taylor a b*tch by explaining, "I called Taylor and had a [sic] hour long convo with her about the line and she thought it was funny and gave her blessings."

In response, Taylor's spokesperson denied that Kanye asked for her approval for the controversial lyrics. She released an official statement claiming that Taylor had only been asked to release West's song on her Twitter page, and had instead warned him not to release a track "with such a strong misogynistic message".

In July, Kim Kardashian posted a recording of the phone conversation online, in which Taylor appears to approve West's lyric, describing it as a "compliment" and a show of friendship. Because of this video, Taylor has been accused of lying about approving the lyrics.

Well now the full call has leaked. And the videos suggest that Kanye got clearance for the "Taylor owes me sex" bar, but not the b*tch one. In essence, Kanye and Kim were lying and misleading the public about Taylor Swift.

KIM K AND KANYE AND THE MOST DESPICABLE, GROSS AND MANIPULATIVE PEOPLE IN THE INDUSTRY THEY LIED ABOUT TAYLOR SWIFT IN 2016 AND THIS THREAD OF THE LEAKED PHONE CONVERSATION WILL SHOW YOU THAT. 18K people are talking about this

KIM K AND KANYE AND THE MOST DESPICABLE, GROSS AND MANIPULATIVE PEOPLE IN THE INDUSTRY THEY LIED ABOUT TAYLOR SWIFT IN 2016 AND THIS THREAD OF THE LEAKED PHONE CONVERSATION WILL SHOW YOU THAT.

She's clearly uncomfortable af with him saying she owes him sex and tells him she will think about it and let him know if she's okay with it. And ALSO tells him that she wouldn't like if he'd called her a b****.
And he never once mentions "i made that b**** famous" line to her 3,215 people are talking about this


Folks on Twitter are upset, and believe that Kanye lied to them.