Kanye West appears on first AIRPOOL karaoke segment with James Corden as the rapper talks marriage, religion and hardships on a private jet with his entire Sunday Service choir 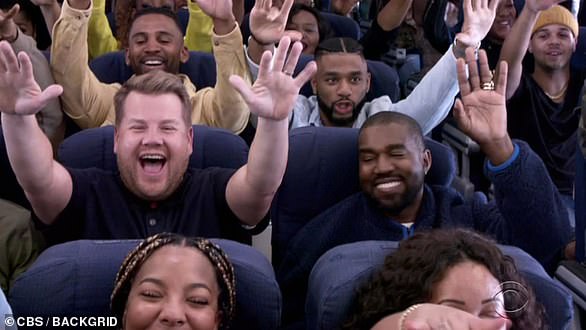 Kanye West appears on first AIRPOOL karaoke segment with James Corden as the rapper talks marriage, religion and hardships on a private jet with his entire Sunday Service choir

Kanye West made history as the first ever guest on Airpool Karaoke, a spin off from James Corden's infamous Carpool Karaoke skit.

The famed rapper, 42, joined British expat James, 41, on a private jet alongside the entirety of his Sunday Service choir, with the group randomly performing a medley of hits throughout the interview.

During the chat, the pair discussed their views on marriage, religion and financial hardships, interspersed with performances from the choir.

The sketch was filmed for James' US talk show, The Late Late Show, which regularly features the Carpool Karaoke sketch.

In the skit, James calls a random celebrity to drive to work with him, but this time, his flight to Los Angeles is cancelled so he asks Kanye for a ride on his plane.

Aside from the Carpool Karaoke session taking place on a plane instead of a car, Kanye's appearance marked another first, with the choir performing the first live performance in the sketch's history.

Making history: Kanye West made history as the first ever guest on Airpool Karaoke, a spin off from James Corden's infamous Carpool Karaoke skit

During the chat, talk soon turned to Kanye's wife Kim Kardashian, 39, whose wedding made the world's media in May 2014.

Kanye claimed that it feels as though he's been married for '500 years' and insisted that marriage was 'uncool' until he tied the knot.

Kanye, who just dropped his ninth studio album Jesus Is King last week, has been married to Kim for five years, but claimed marriage years are longer than human years.

The rapper added that it feels like he's been married to the Keeping Up With the Kardashians star for '500 years.'

Kanye continued: 'People thought it would be uncool to be married, and then I got married and people thought "oh that looks cool". 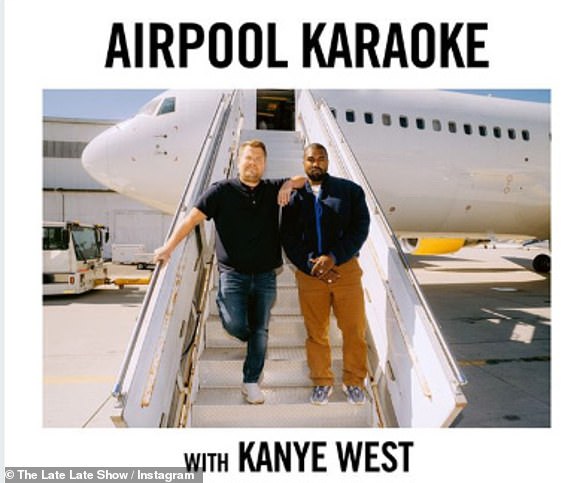 Sketch: Corden had been trying to get West on Carpool Karaoke only to have West cancel on him twice, but the third time was the charm, it seems

Kim was famously married to NBA player Kris for 72 days in 2010, before she filed for divorce, citing irreconcilable differences.

Chat then turned to their family life, with Kanye discussing how he spends his evenings with Kim and their children North, six, Saint, three, and Chicago, 22 months and Psalm, five months.

The Yeezus hitmaker explained: 'I don't like going out at nighttime, I like being at home with my family as much as possible.

'We eat dinner and we play with the kids and we'll put the kids to bed and then we'll go to bed and my wife watches Dateline and I read the bible.'

James, who shares three children with his wife Julia Carey, then asked Kanye if he would recommend they try for a fourth.

Kanye was quick to encourage the comedian, stating: 'The richest thing you can have is as many children as possible.'

As James asked 'you would roll for a fifth?', Kanye was quick to respond 'for a seventh!' explaining that he and Kim were in agreement that having seven children would be the ideal. 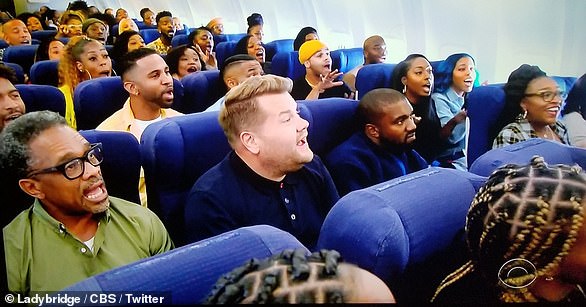 Doting dad: Kanye was quick to encourage the comedian, stating: 'The richest thing you can have is as many children as possible'

Kanye has been holding his Sunday Service worship services since the beginning of the year, and recently confirmed his conversion to Christianity.

Appearing on a private jet alongside his Sunday Service choir, his chat with James soon turned to his religion.

Deadpan, Kanye mused: 'God is using me, as a human being. As humbly as I can put it, he's using me to show off'.

Claiming that his faith also impacted his finances, the star continued: 'Last year I made a $115 million and still ended up $35 million in debt.

'This year I looked up and I just got $68 million returned to me on on my tax... and people say don't talk about these numbers.

'No, people need to hear someone - who has been put into debt by the system - talk about these kind of numbers now that they're serviced to Christ.'

Kanye continued: 'God is showing off! Yeezy [his brand] is worth $3 billion dollars, number one searched brand in the world, he's showing out. 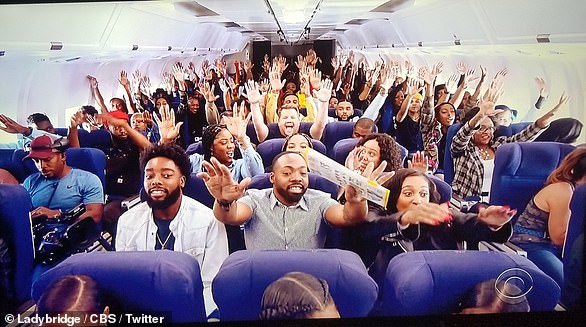 Choir: In the Carpool Karaoke sketch, Corden calls a random celebrity to drive to work with him, but this time, Corden's flight to Los Angeles is canceled so he asks West for a ride on his plane, carrying his entire Sunday Service choir

Kanye also talked how his friends and family, while meaning well, didn't know how to get through to him.

'People in my family were praying for me, but they couldn't call me and scream at me. I'm a grown man,' Kanye said.

'But it was God that came and put this thing on my heart and asked if I was ready to be in service to him,' Kanye said, adding, 'I have no regret and no shame.'

Kanye also performed his hit song Jesus Walks from his 2004 album College Dropout, but he made some subtle changes to the lyrics.

He also performed Selah from his new album Jesus Is King, before the plane landed and the segment ended.

Jesus Is King was released on October 25, after weeks of delays.