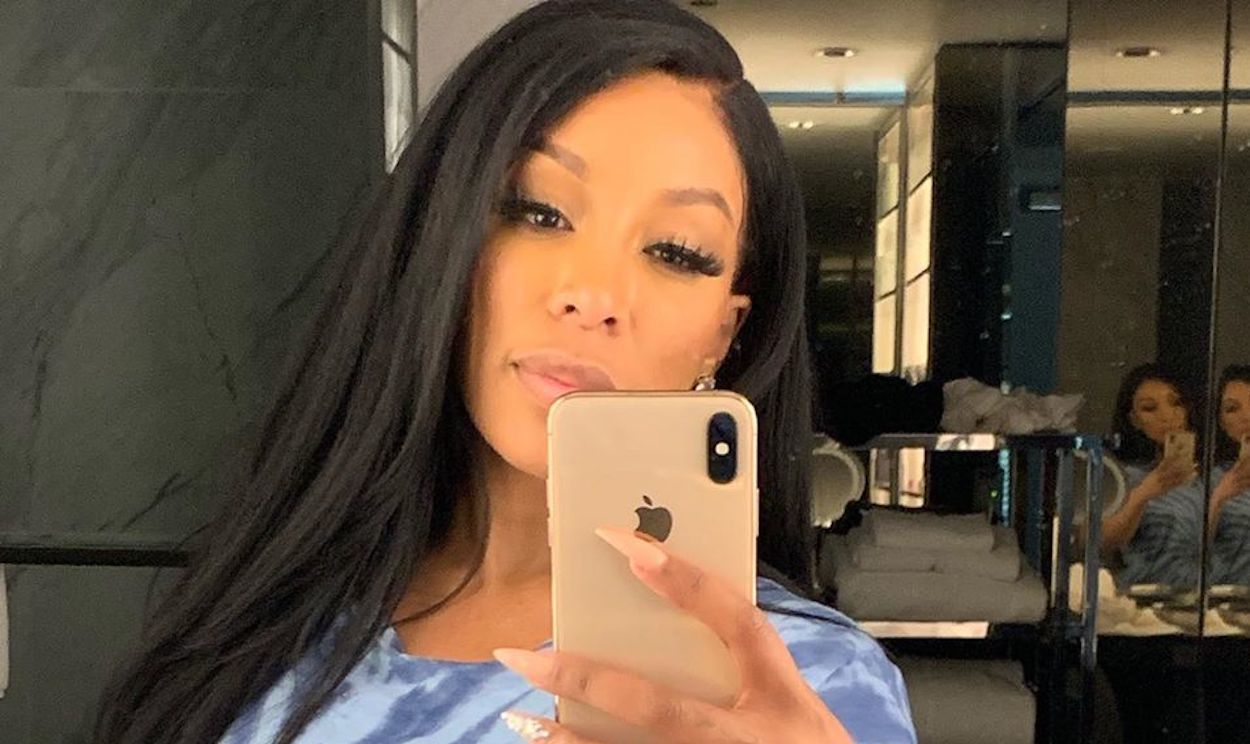 K. Michelle has stepped forward to address an embarrassing video of herself being circulated on social media.

The R&B singer/reality star has been quite vocal about her journey to remove butt implants she got a few years ago. Many fans remember that after some time, the singer started to look unappealing due to the large implants that no longer suited her body. Those same fans were triumphant upon hearing her decision to take them out and pleaded that she does not undergo surgery again.Yesterday, fans were shocked when during an Instagram live session, it appeared that K. Michelle’s butt implant had exploded. The video quickly went viral as many persons began to circulate it.

Dancing to Cardi B’s “Up” in a black dress, it quickly becomes apparent something has gone awry when K. Michelle starts to twerk, although she continued dancing and switched sides to deflect attention from her rear end. She then hastily ended the video. Fans had, however, already noticed the mishap, and viewers were quick to point out what they had seen as it appears that her butt completely deflated.
Therefore, it’s no surprise that the wrath of social media followers were unleashed after this video went viral, as many criticized the reality star.

This morning she took to social media to address the video. In response, K.Michelle tweeted, “So the video of me dancing is sad that I even have 2explain. I walked y’all through how difficult this process of removing silicone from my body for 3YEARS/16 surgeries Did we not forget I almost died due 2this?????? Now i’m in the process of 3 reconstruction steps.”

She further said: “What u saw in the video was a happy woman with a faja and my extra fat! I’ve been very open so I can heal ladies. I didn’t have to tell anybody and I could’ve covered up until the process was done, but NO. Ladies need to see and hear the truth. I decided to use my platform to help.”

K. Michelle noted she still had one surgery left to do next week, which will hopefully remove the extra skin. She also revealed that she was the executive producer and host of a new show on Lifetime that will primarily focus on silicone removal and botched surgeries.

Sadly, she has had a history of targeting others and body shaming them, so the backlash she is now facing is seen by some as payback as many are not sympathetic to her situation.

In the video, K Michelle dances to Cardi's new song Up. It starts off fine, until K Michelle starts twerking. That's when things goes awry.

In the middle of twerking, the bottom of K Michelle's booty appears to give out, causing her entire butt to drop to an unnaturally low level. K Michelle clearly felt her booty drop because she because she immediately stopped dancing and grabbed her buttock, and held it up from dropping further.

It's not clear whether the singer will suffer any real injury to her body due to the booty - other than some hurt feelings and a little discomfort. With that said, she looked great though!

K Michelle is a singer, songwriter, and television personality. She rose to fame as the breakout star of VH1's Love & Hip Hop: Atlanta after appearing as a regular cast member for two seasons on the reality television series.

Well parents have a responsibility because i wouldn't bring them home, trust me they are good to pass the time, but once i wake up its time to go

A lot of these women these days are being raised by teen age moms. These moms are in thirties with teen aged children. They basically were raised as more of a sibling then a mother/child relationship. If your child is out in the street having kids at the age of 13/14, these kids defiantly didn't have a proper upbringing. So these children were not taught to love themselves. The Cardi B's, little Kims, Kim Kardashians are raising our kids. Most of these instagram hoez came off the pole and these are the ones who are raising our kids not to embrace their beauty. How do we say it's okay to give an award to a pole dancing, drugging and robbing dudes, plastic surgery, sitting on the toilet on live. troll? It's sad to see the world our babies are growing up in.

caribmama but there was a time when black women embraced their beauty, as we move on they begin to be more insecure looking for hugs and approval from white people, every other women embrace their beauty except for black women, we are different for a reason, those black dudes youre talking who marries becky are the insecure males in the community, i mean come on i see black women with their own hair but wearing a wig every day, that is pure insecurity, to go on 365 days and telling they have no time to do their hair but have tome for every one else, i tell any woman from the door why i may not be serious and will not make the effort because i want my woman to look like God made her, if she is not ok with that it means God made a mistake, than she will have to work out with God while i move on to the next

Look at you Mr1stroke sounding like you in love an shyt!!!!! Carry her around the house.....LOL!!! Yes.....everybody does have their preferences. But how many hi profile black women are out here rocking naturals? Congress, Senate, Celebs? You get the sometimer's who want to let the world know they are down with the get down and will rock natural hair styles til they let the world know they black. Alicia Keys did it till she won over her audience. I love my natural hair and will never go back. Just like you have brothers that choose to be with a becky cause they tired of seeing their women with a scarf on her head, them is the same ones that would not appreciate the natural.

caribmama lol come on i hear many women say what you just say for many reasons and i think women say that to insecure men, like they say a real men will take a woman with kids, so does that mean if a man prefer to have his pwn kid and do not want to deal with someone drama makes him not a real men? They say a real men will love a woman no matter what okay, the bigger the better what exactly are we talking about, butt or size, if so any men of potential wants his woman to be beautiful in every way, thats what attract a man to a woman when he first lay eyes on her which is her figure or looks, she does not have ti have the biggest butt but she must be sexy, a nice sexy shape does not mean a big butt.

But when it comes to size and weight, only someone who is living in denial and expect a man to deal with insecurity and lack of love for self to deal with her, because we both know if you care about someone you want to see the best for her or him, so over weight is not healthy and we both know it, it is a very uncomfortable life style, its a lot of things you cannot do with an over weight woman sexually, can you do things in the shower or carry hee around the house, what about positions in the bed room, can her body be that flexible?

What about activities outside, when the last time you see an over weight woman bike riding or just jogging for fun, or how often do you see that, what out doors activities can you tell me how often that happens, but if you are talking about preferences i understand, thats what make us different, if a man prefer a fat chick, a skinny with flat ass, or a thick chick with a big butt that is choice, just because someone else dont like either does not make them less than a man

Thats like saying those women who say they like men with small dicks, or short men, or broke men are not real women, i even hear women say that they dont want to get involve with men with kids, i believe that is their preferences, but some people be over the top, if a woman looks fine i like her the way she is, all that fake butt and fake hair is not me, i want my woman to have the same morals that the women who raise me hold

Our men don't want afros or a natural body anymore. Word on the street is.....the bigger the better! A real man will love a women no matter how big or small she is depending on your preferences. Women have lost love for themselves to attract these guys that want it as big as it can get. Putting glue in their hair, glue on their eyes, I'm glad I went back to a natural hairstyle. It took a minute to get use to it, but my hair is longer than it's ever been and I love it. Fugg what any tired ass dude thinks with your tired ass blown up female that don't know how to treat you.