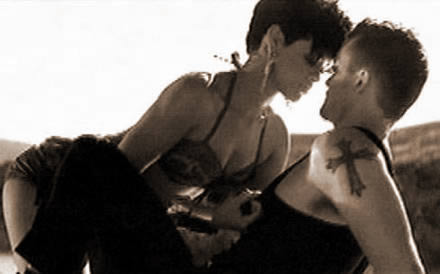 The latest rumor doing the rounds is that Timberlake and Rihanna are seeing each other in secret.

Gossip websites are claiming that Rihanna is dating fellow R&B singer Justin Timberlake. JT is currently in a relationship with actress Jessica Biel but it seems that like that is all going down the tube.

A source close to Rihanna told Showbiz Spy that, "Justin and Rihanna have been seeing each other for the past few weeks. He is really into her and it's only a matter of time before he dumps Jessica."

The two have been spending a lot of time together since Rihanna began collaborating with Timberlake on her forthcoming album. It seems like their working together has resulted in an album that will be quite different from her previous albums.

The 'SexyBack' singer says he is proud of what they have created.

Timberlake told red-carpet reporters at the Emmy Awards, "The stuff we've come up with in the studio, it's the next step for her. It's a little more grown-up. It's got some edge to it."

Rumors of a rift between Timberlake and his girlfriend of two years have been circulating since he appeared at the Emmys on Sunday night without her, though JT told the press that Jessica just had a cold.

Comment by martin wadada on October 7, 2009 at 5:00pm
WELL RIHANNA IS NOT REALLY A WOMAN, SHE NEED TO CHECK HER CARIBBEAN HISTORY, SOMETIME FAME IS IN THE WRONG LANE...SHE NEED TO CHECK ARETHA FRANKLIN, DONNA SUMMER, PATTI LABELI, STAPLE SINGERS, JUDY MOWATT, MARCIA GRIFFITHS, RIHANNA IS LIKE A TAXI TOO MANY DIFFERENT PASSENGERS..

Comment by Beverley McFarlane on October 3, 2009 at 6:47pm
nothing to say on that, it's on them, if it works for them then what's it

Comment by michelle alcala on October 3, 2009 at 3:08pm
i have no coment on that...rumors will always be the talk on every celebrity weather its ture or not...