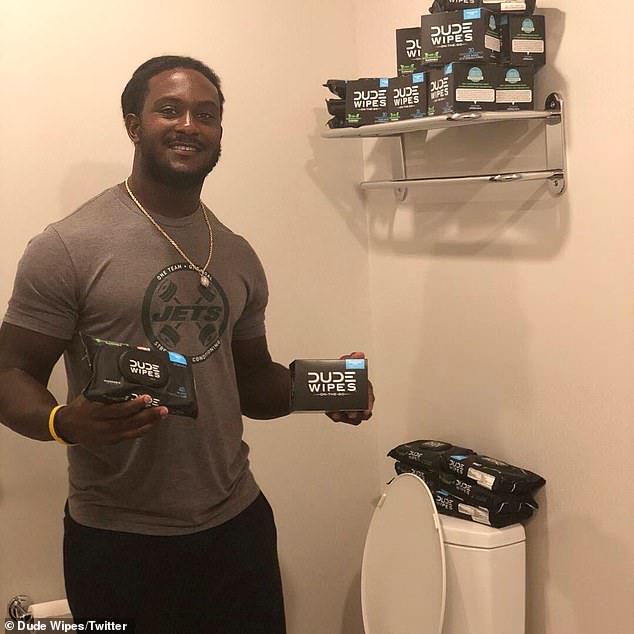 New York Jets running back Isaiah Crowell has been fined $13,369 by the NFL for his crude touchdown celebration - but the news isn't all bad after the stunt landed him a promotional deal.

After scoring a touchdown against the Cleveland Browns on September 20, Crowell took the football and wiped it against his rear end before firing it into the stands. The fine was announced on Tuesday.

Crowell's unusual celebration made for a viral moment from New York's loss to previously winless Cleveland.

It also earned Crowell a 15-yard penalty and a scolding from coach Todd Bowles. Isaiah Crowell #20 celebrates his touchdown during the September 20 game against the Cleveland Browns. He was fined $13,369 by the NFL for the crude celebration

But the silver lining emerged when Crowell landed a deal with Dude Wipes - a company that sells a toilet paper substitute for men.

He and the company posted pictures to their social-media accounts Tuesday showing the fifth-year pro and first-year Jet holding boxes of the product.

Crowell, 25, posted a photo on his Instagram of him holding two packages of the toilet-paper substitute for men.

'Thanks to @dudewipes I am now covered. Never leave home without them!' Crowell wrote in the post.

Crowell, 25, posted a photo on his Instagram of him holding two packages of the toilet-paper substitute for men 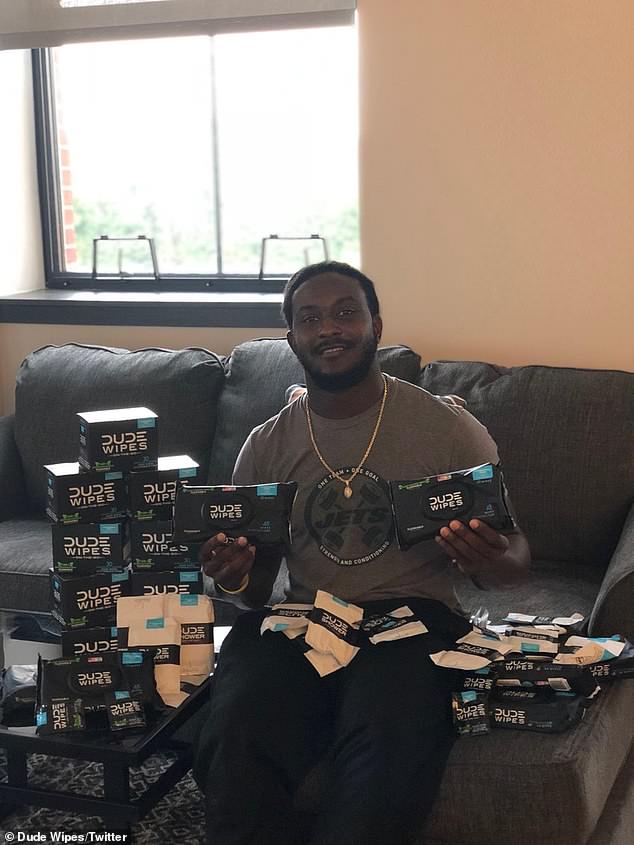 It is not the first time Crowell has courted controversy.

In 2016, he posted an image of a hooded figure slitting a police officer's throat to his Instagram page, along with a complaint that police 'continuously choose to kill us'.

Crowell quickly deleted the post and apologized repeatedly, explaining that he had been emotional over the deaths of two armed black men, Alton Sterling and Philando Castile.

The post raised alarm coming just days after the fatal shooting of five police officers in Dallas, but Crowell's repeated apologies were accepted by Cleveland's patrolman's association after he donated $35,294 to a fund for the fallen Dallas officers.