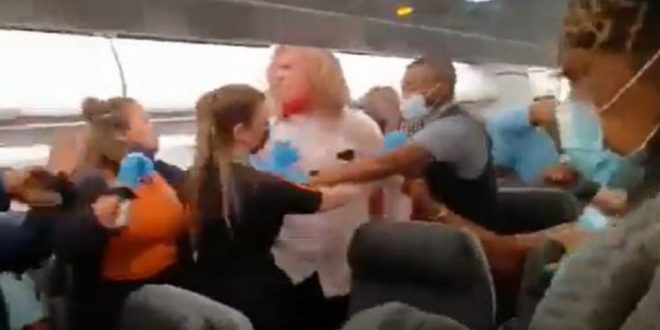 “This N**** is in my seat… all the people on this plane is a N****” States the white man to the female that was in the seat where he should sit. “i’ve never been so disrespected in my entire life” States the young lady who was being disrespected!

The man reportedly boarded the plane late and when he arrived he got into some issues settling into a seat and as a result he got very disrespectful to the people around him.

The plane was leaving from Kingston to New York on Tuesday evening.

At one point we hear the man shouting “n**** n**** n**** n****” and at another point we see several people throwing punches at him, something he did not back down from as he fought back.

One person asked “If he is against black what the hell him a do in Jamaica…” while another stated “There was a Caucasian man in Ocho Rios that was doing the same thing in a Chinese owned supermarket and i could not keep my tongue when I asked where he thought he was. He was cursing out the security and cashier and nobody was saying or doing anything”.

Learn full details about the incident below.

shout out to Jamaica.

Comment by vaughn mitchell on October 22, 2020 at 9:03pm
That's Sochi Rios, for you, kingston, he would be dead. Trump, making white people act brave.